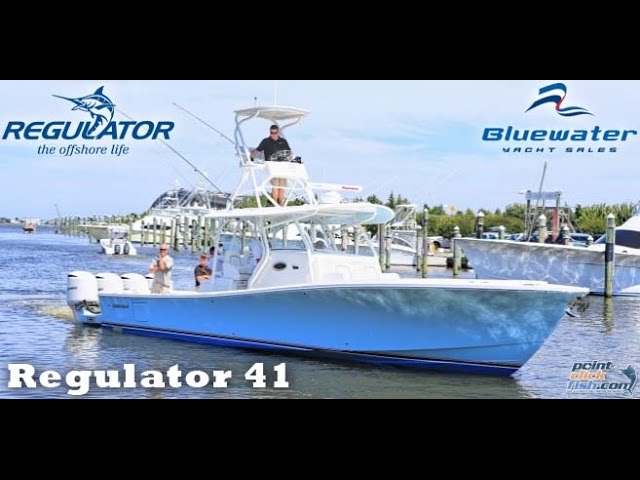 Manteo, NC – While providing coverage for the Pirates Cove Billfish tournament in Manteo, North Carolina, the PointClickFish Live Team had the opportunity to get underway on Regulator Marine‘s newest flagship, the 41 Regulator. The new 41 was designed by Lou Codega and powered by four Yamaha F350 outboards. From a distance, the 41 has the familiar classic Carolina flare for which Regulator is known. Once closer, you notice just how big this center console boat really is. With an overall length of 47’3″, a 12′ 6″ beam, and a dry weight of 20,100lbs, everything on the boat has been oversized: the helm station, welded top, fish boxes, tackle center, etc. 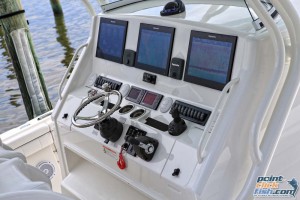 The helm station features room for three 16 inch displays. The boat is equipped with touchscreen Raymarine gS165 Glass Bridge Multifunction Displays. Charts, radar, sonar, and engine performance data replace traditional analog gauges and dedicated single use displays. This results in an extremely neat and clean appearance. There is ample room for three people behind the frameless windshield. Standard seating offers three triple helm chairs, two built-in drink coolers, and mezzanine style seating on the back side. Our August test ride was kept cool with 10,000 BTU air conditioning blasting through vents on the dash. The A/C also cooled the cabin, which is accessed via a large frameless fiberglass door on the port side of the console. The cabin features a galley, double berth, and full-size head with shower.

The front of the console houses a 240 qt storage area with dedicated molded bucket storage that is accessed via an oversized hatch. In front of the console, full bolstering leads to wraparound seating which could seat 10 people easily. It features flip-up loungers on the aft end and cavernous storage underneath. Between the V, at the touch of a button, an electric motor powers a section of the deck to rise, converting it into a table or filling the V to make a massive lounge. Just aft of the table, the in-deck fish box is large enough to stow standup fishing rods. The bow features an automatic windlass with a thru stem anchor roller and freshwater wash down. 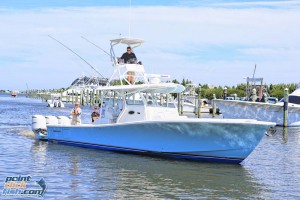 Back aft, the boat is fitted with one of our favorite upgrades, the 4X Tackle Center featuring a sink, refrigerator, electric grill, and countless drawers and tackle tray compartments. To starboard, a dive door with folding ladder makes entry from the water, or to a floating dock, effortless. An integrated, flush, folding seat fills the full transom. The onboard 8 kilowatt generator easily powers all the electrical demands and is located under a hatch in the deck. The generator is so well insulated that it barely can be heard running, even while at the dock!

Driving the 1400hp, 10 Ton Regulator around the docks is made easy thanks to Yamaha’s Command Link Plus rigging system. The system features a joystick style control which automatically adjusts engine gear selection, RPM, and steering. All of this gives the 41 the ability to walk sideways towards a dock without the need for a bow thruster. Ultimately, this makes the captain look like a pro! 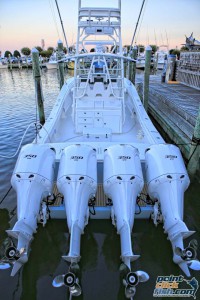 For normal cruising, a two handle binnacle controls all four of the engines RPM and gear cases. All engines are synced via computer providing a fast and comfortable cruising speed of 35.9 MPH while burning 44.2 GPH*. Although we did not have time to run the 41 out the inlet to test her in the ocean, we did pass several large yachts and the Regulator cut through the wakes with minimal impact and no need to pull back on the throttles. At 6000 RPM, she has a top speed of just under 65 MPH. The mid-range acceleration was equally impressive. Having four 15 1/4 X 21 inch propellers spinning and punching the throttles from cruising to full throttle will definitely throw you back in your seat! 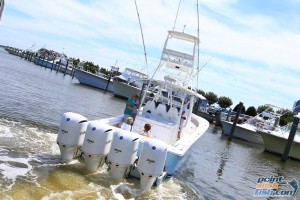 Regulator Marine’s new 41 is a high-end fishing and entertaining vessel. She features comforts forgotten or overlooked by many other manufacturers.

The standard price with four outboards is around $649,995. The boat we ran is almost $800,000 with an optional tower with controls and hardtop, deluxe tackle center outriggers and other features. 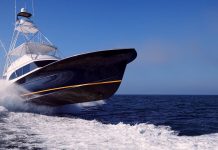 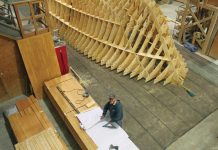 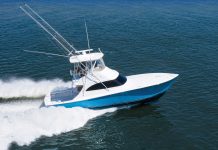