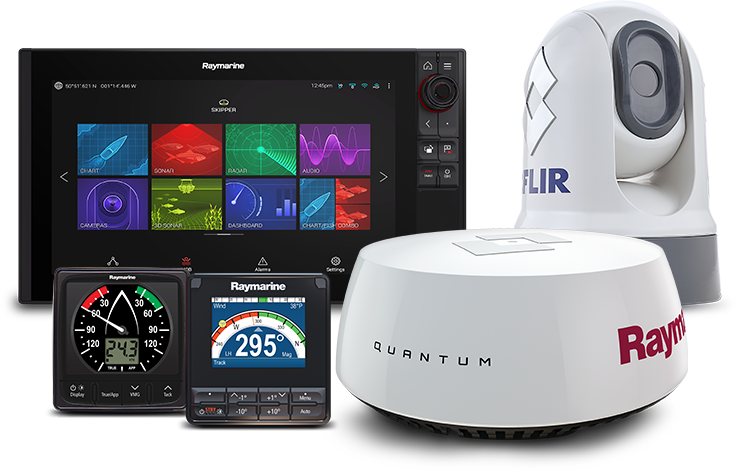 Boaters from around the world are coming together in sunny Florida for the 2018 Fort Lauderdale International Boat Show, Wednesday, October 31 through Sunday, November 4. Be sure to make plans to visit FLIR Maritime and Raymarine electronics in the Bahia Mar Electronics Tent. The array of cutting-edge navigation technologies is not-to-be missed.

Your View Made Better, with ClearCruise AR
New for this season is ClearCruise Augmented Reality, an exciting technology that makes it easier than ever for boaters to understand the navigational environment around them. Available exclusively on Raymarine’s Axiom series multifunction displays, ClearCruise AR provides live HD video feeds of the boat’s surroundings overlaid with dynamic graphics that clearly identify navigation aids, automatic identification system (AIS) contacts and saved waypoints. Raymarine’s powerful new AR200 Augmented Reality Stabilization Module delivers stable video and precision alignment to the entire AR experience. The system can support up to 10 high-definition feeds from Raymarine CAM210IP and CAM220IP marine cameras for complete 360° coverage, if desired.

New Apps for Entertainment, Integration and Communications
Raymarine will also be showcasing its new LightHouse Apps for Axiom multifunction displays. Axiom Apps lets select third-party applications run on the LightHouse 3 operating system. Axiom Apps include titles from leading entertainment providers like Netflix and Spotify, as well as marine-industry partners like Seakeeper, Lumishore, Mazu and Theyr. Not only can you stream entertainment, but also control things like underwater lighting and gyro stabilization. Apps can also provide access to Iridium satellite communications and worldwide weather data. LightHouse Apps is a flexible, expandable system that allows new technologies to be easily deployed on the Axiom LightHouse 3 platform. Interested developers and industry partners are invited to speak with Raymarine representatives about deploying their applications as LightHouse Apps.

Outfit This Fall and Save Big!
Boaters shopping for new electronics should check out the generous incentives being offered on Raymarine and FLIR systems, now through December 31. Raymarine’s Simply Superior Sales Event is offering rebate savings up to $700 when you purchase a Raymarine Evolution™ autopilot system and an HD, Quantum or Quantum 2 Radome or Magnum™ open-array radar system. Additionally, FLIR’s Big Thermal Sales Event is offering a $250 rebate on the popular M232 marine thermal night vision camera system. Plus, if you purchase any 9-inch or larger Axiom multifunction display with your M232, you’ll be eligible for an additional $500 rebate bonus. Stop by our booth or see one of our dealers at the show for help in building or upgrading your dream electronics system.

FLIR Maritime and Raymarine electronics are exhibiting in booth 330 in the Electronics Tent, located at the Bahia Mar Yachting Center. We look forward to seeing you there!