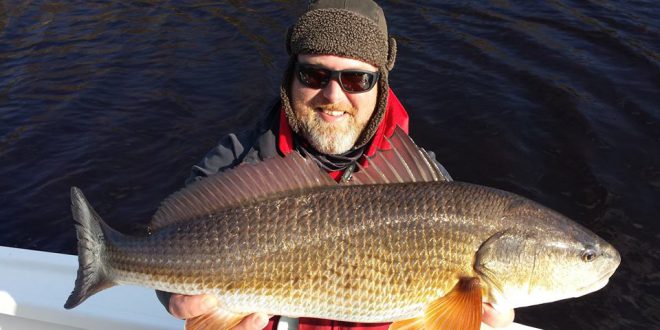 When it comes to winter weather, fish and fishermen have some similarities.  The most important is that both would rather be warm and the cold dulls their enthusiasm and slows their drive.  In most cases, they’ll do what they have to for surviving, but it’s not going to be done aggressively or quickly.

Take the hint!  One of the most important things a fisherman can do for better winter success is to slow down.  The baitfish that are still around aren’t moving quickly, fish aren’t chasing them aggressively, and if you want to catch anything, you won’t be moving your bait quickly either.  Slow is the rule for winter fishing and many times moving the bait a foot or so and then stopping for 10 to 20 seconds is the key to success. 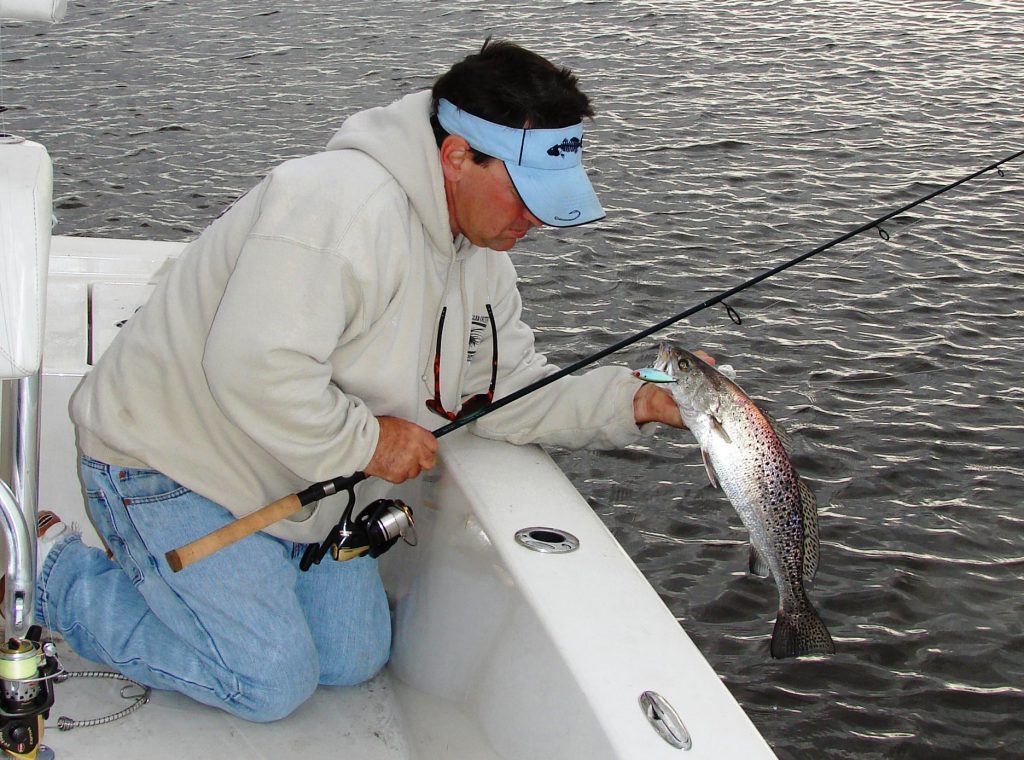 When the water is cold and you have a good looking lure, you can’t fish it too slowly.  My best example of this is a personal story about learning to cast a bait caster reel one winter long ago.  I have the innate ability to backlash even an Abu Garcia Anti-Backlash Baitcaster and was proving it one December several decades ago.  On this particular cast, I blew up a professional overrun (bird’s nest to most fishermen) that was nearly impossible to pick out.  It must have taken several minutes.

When I finally got all the line back on the reel and it came up tight to my lure, there was resistance.  Thinking it had gotten hung sitting on the bottom for so long, I raised my rod tip and shook it in an attempt to free the lure.  When I shook it, a fish took off and several minutes later I landed my personal largest speckled trout ever at 8 pounds, 4 ounces.  This fish hit my lure as it was laying on the bottom and then just sat there with it!  For those who want to know the lure: it was a MirrOlure TT in the 11 color.

I am now a firm believer that you can’t fish too slow in cold water and often pause baits several times during a retrieve.

Scent can be your friend, especially when the water is cold and fish are lethargic.  A bait or lure that lays there or slowly passes by may be enticing, but it might not always enough look good enough to draw a strike.  However, if that lure smells good too, that may be the extra it takes to convince a fish to grab it.

I remember one February day when it was cold and windy and I was pretty sure it would be a futile trip.  On this particular day, the fish would only hit deadsticked baits with scent.  If the bait was moving or the bait didn’t have scent, it wouldn’t get any love.  Conversely, baits that were stopped and smelling good drew strikes.

The absolute proof of this was when I hooked my biggest redfish that day while my rod was cradled under my arm and I was taking a picture of my fishing buddy.  We were fishing a mixture of Berkley Gulp baits and some other crab and shrimp shapes that were coated with Pro-Cure shrimp and crab scents.  They caught fish equally well.

I believe in downsizing lures when the water is cold.  I don’t know what it is, but suspect it has something to do with the small baits looking easier to catch, but I’ve had days when switching to smaller baits is what made it happen.  Every manufacturer makes smaller versions of their lures.

With hard baits, look for smaller versions of your favorites in their lines.  I use a lot of MirrOlure MirrOdine lures and they have made the small pogy shape in three sizes for several years and this year added a fourth larger size.  The MR 17 (2-5/8 inches) and MR 27 (3-1/8 inches) are the most popular sizes and during the winter I usually start with a MR 17.  Many fishermen mistakenly overlook the smaller MR 14 (2-1/4 inches) as being too small, but some days it’s the perfect size to save the day.  The MR 37 (4 inches) is larger and was added this year. 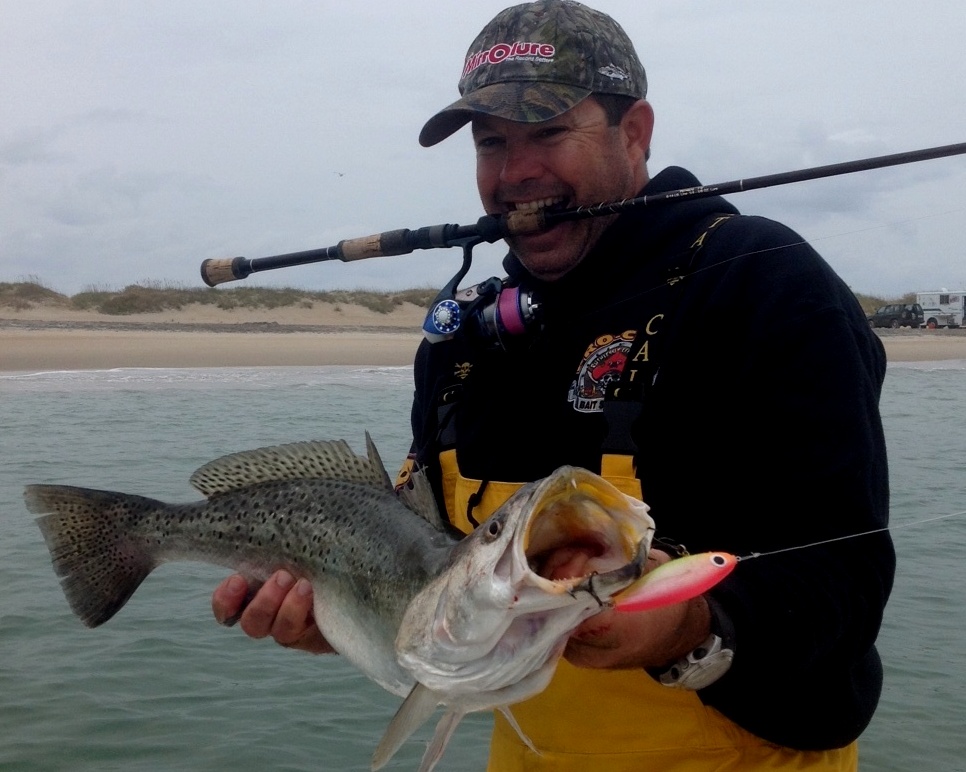 With soft plastics, the first step is to drop from 4 inch to 3 inch baits.  Fished slower and paused occasionally, they must look easier to catch.  Don’t be afraid to fish soft plastics shorter than 3 inches either.  They have saved the day several times and one day downsizing to 2 inch Berkley Gulp  Shrimp took a very slow day to exceptional for the last hour of sunlight.  One of those late fish that hit the 2 inch bait was a citation speck.

When the water is really cold, fish don’t feel much like moving and try to stay out of the current so they don’t have to exert a lot of energy.  Very often you can save the day by finding places with very little current that are close to flowing current.  I want to say no current also, but I really feel like you need enough current to be able to see the water is moving.  Even in the cold of winter, most fish like a little current to carry bait by them.  However, where they will hold and feed in stronger currents when the water is warm, they look for slow moving water and places to hide out of stronger currents when it’s cold.

There are several ways to find slower moving water.  This can be behind oyster rocks, points, and other interruptions in the current, or along the edges (usually the water moves slower on the inside of bends in creeks and rivers), and in bays or coves that are off the main channels.

Another way to find slower moving water is to fish the last hour or so of one tide and the first hour or so of the next tide.  This is when the tide is slowing from one tide to stop and then begin moving the other direction.  While the end of the rising tide and beginning of the falling tide sometimes produces fish, I prefer to fish at the end of the falling tide and beginning of the rising tide.  This is doubly preferred if this tide change is between about 11:00 A.M. and 4:00 P.M. 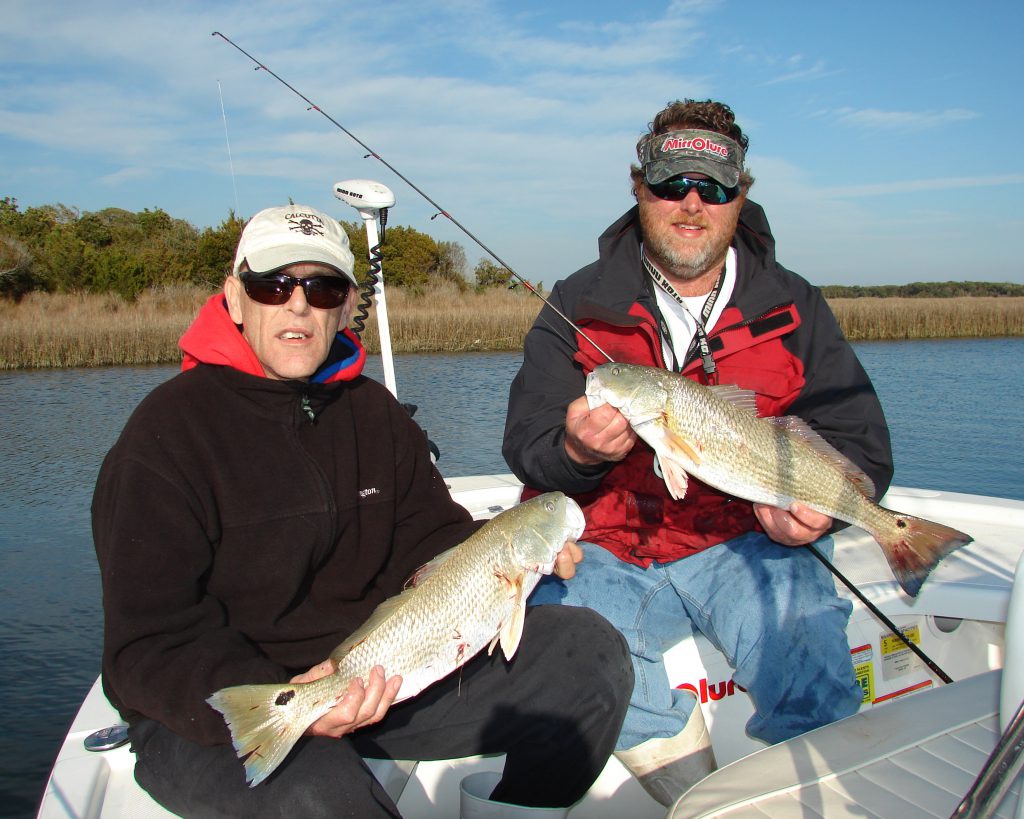 Warmer water will often get fish into a feeding mode and sometimes the difference can be as subtle as a half degree.  When the tide is low during the middle of the day, the water will usually be warmest from the sunshine on it.  Also remember that shallower water warms more quickly than deeper water and if some patches of bottom, especially darker sand and mud, are exposed, they will absorb heat from the sun and help warm the surrounding water too.

Another thing to look for is tidal creeks that are long enough the water never fully leaves the confines of the creek on a falling tide.  The water from the back of the creek may only flow out to near the creek’s mouth and doesn’t mix with cooler water of a larger creek or river, so it retains some of its warmth.  Check your temperature gauge the next time you head to the back of a creek.  The water will get warmer as you go farther into the creek and be its warmest at the back of the creek.  This is especially evident in longer creeks at lower tides.

One last thing to mention is to become a weather watcher.  Weather plays a major part in catching fish and during the winter it is often even more a factor.  Everyone likes to fish on pretty, warm days, but often the first nice day after a cold snap just doesn’t produce.

I like to look for warm weather breaks of at least 2 days and those of 3 days and longer are better.  If my schedule allows, I’ll pass on the first day of warmer sunny weather and be ready on the second, third and so on.  I won’t say that fish never get fired up and start biting on the first nice day after a cold snap, but it isn’t common.  However, they usually start getting active from the second day on and sometimes the fishing gets really good.

These tips should give you a few things to try as you fish during the winter.  Usually one or more of them will help produce noticeably more strikes but nothing is guaranteed.  Sometimes we have to be happy just getting out to fish, but when the fish are biting and there is pullage, it’s always better.  Hopefully some of these tips will increase your pullage. 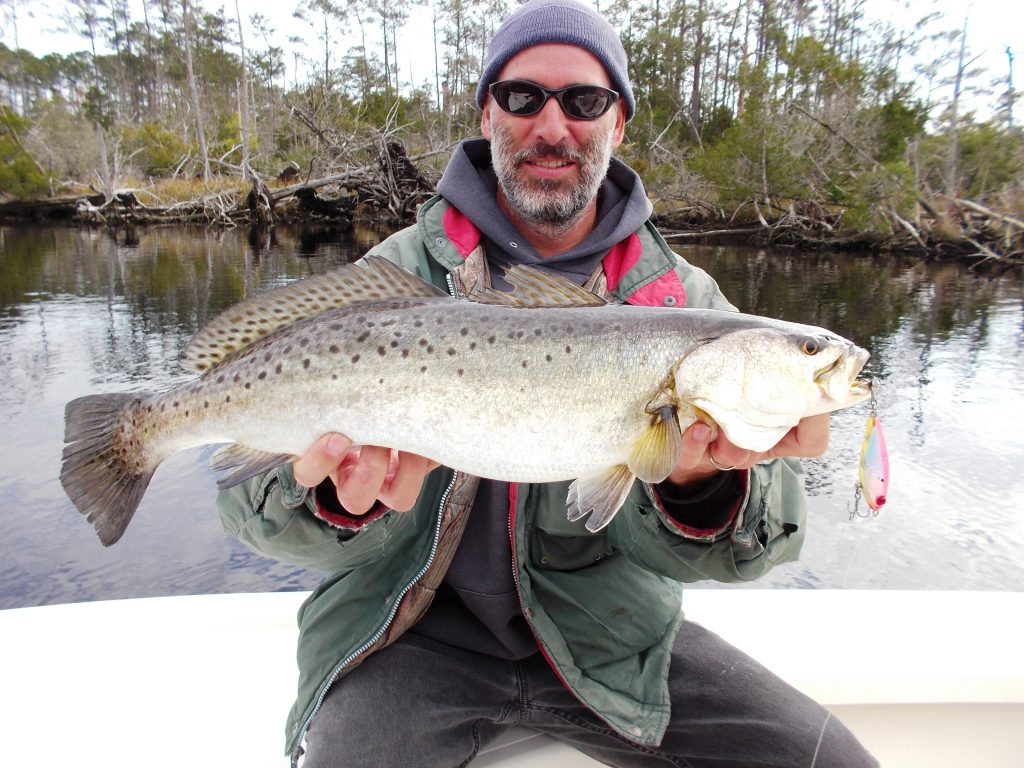