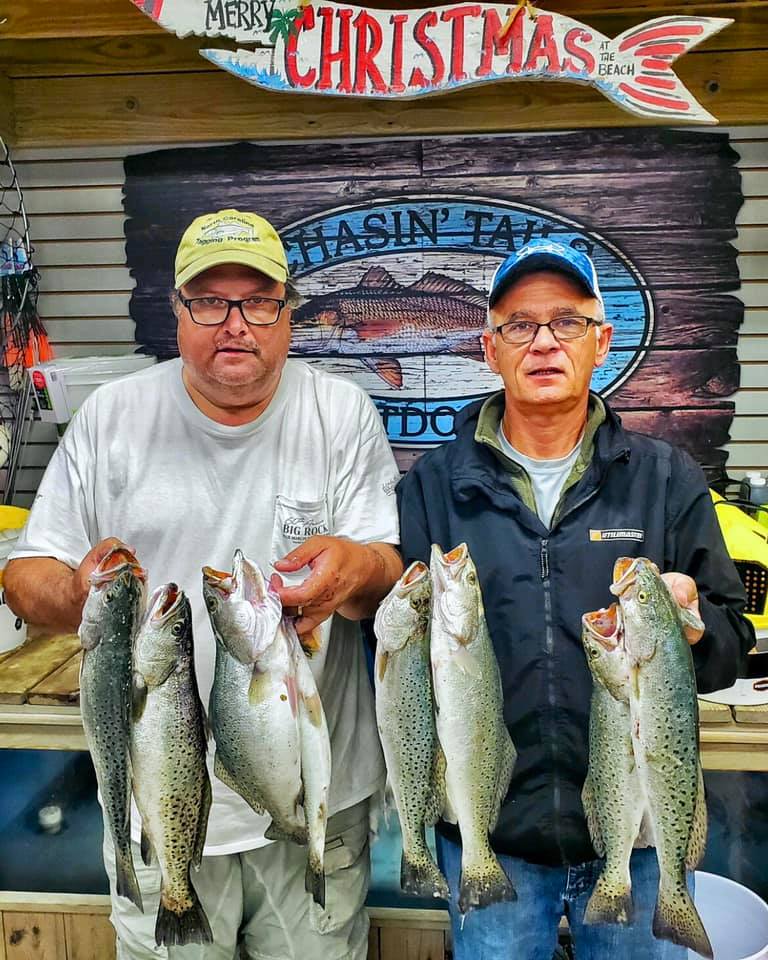 Speckled Trout action is still good, I’d say it’s not quite as good as we saw back in October with many 2 to 3lb fish just about everywhere you stopped to fish. But over the last two weeks, we’ve weighed some monster fish at the shop, the largest right at 10lbs and several in the 6lb range.  Since the water temps have dropped in the 50’s it’s got very clear in our area. The fish are a little pickier than they were back a few months ago. Now, what we’re seeing is the fish are more schooled up so if you aren’t in the exact area it can be hard to get on the bite. Thanksgiving weekend, we had a few boats out fishing over and we saw this happen several times. Boats all-around fishing and just one out of the group catching them because they were sitting in the exact spot the fish were. The best area for us has been in the Turning Basin area, Shack Point, Cape Lookout Rock Jetty, North River, Core Creek area, Neuse River around Adams Creek, South River and Club Foot Creek all have been holding good numbers of fish.

As far as what lures that’s been working, the Mirrolure bite has been super strong now that water temps have gotten into the 50’s. It’s just hard to beat, this time of the year because you can work them slowly; nothing like feeling that Mirrolure THUMP from a Speckled Trout. Also, still seeing good action on Z-Man JerkshadZ, MinnowZ and Trout Tricks. Berkley Gulp Shrimp, Vudu Shrimp and DOA Shrimp is also working for anglers. We’ve seen the “Live” bait game come into play a few times over the last week when the guys fishing live bait catching more fish. We are working to get more Live Shrimp, not sure what’s going to happen on that because the water has got cold and it’s getting hard to keep them alive. We do have Live Mud Minnows in-stock which a Speckled Trout won’t turn down either this time of the year going into the winter months.

Gray Trout still hanging around in the Turning Basin area, at the AB High Rise Bridge and Railroad Tracks. Anglers are having no problem catching them jigging Spanish Candies and Sting Silvers.

Red Drum have been schooling up at Shack Point to catch and a few schools have been hanging at Shark Island. Also, seeing a few showing up at the Cape Lookout Rock Jetty for the winter. A few anglers have been finding some Reds hanging around docks along the ICW and it seems when you find them it’s been very good numbers since; they are now schooling up for the winter. Anglers are still catching some nice fish at the Morehead High Rise Bridge.  Berkley Gulp, Mullet and Bait Shrimp has been working the best.

Not many people fishing for them but over the Thanksgiving weekend, we did see some nice catches of Sea Mullets in the Turning Basin area from a few customers. They aren’t all over the place but If you take the time to look around there’s some still here to catch. Fishing Sam’s Gitter Rigs with bait shrimp from the shop has been working the best. It for sure has been an up and down season on the Sea Mullets, some days anglers see some really nice catches and other trips none.

If you want to catch some Albacore there are some studs over on the East Side of Cape Lookout. Most of the Blue Fin Tuna fishermen have been seeing all you want to catch just off the beach. But keep in mind these fish are the big wintertime fish so they’ll be a serious test to the smaller one’s anglers are used to catching in November along the beaches.

Crazy enough we are still seeing good Speckled Trout action along the beach. Just this week, the Oceanana Pier saw some great action, with anglers reporting to us catching over 50 trout a day. So, with that said, the Surf fisherman also are catching trout along the beaches. Mostly for the pier, it’s been old school Curly Tail Grubs. For the Surf anglers, it’s been more of a Mirrolure game in the 18MR, 52M, and TT. Last weekend, it was crazy how many mirrolures were going out the door heading to the beach for the hot bite that was going on. It’s hard to say how long this will last, but right now it’s been pretty good.

As far as the bottom fishing game it’s been Puffer Fish, they have made their showing along the NC beaches and the anglers that like to catch them have been racking up on these tasty fish. Pretty easy fishing to say the least, bottom rigs and bait shrimp from the shop is all you really need to get in on the action.

Well, it’s been pretty slow; few boats went Wahoo fishing over the Thanksgiving weekend without much luck. But the bottom boats are still catching some Grouper, Sea Bass and Snappers, so if you’re wanting to head out the bottom fishing is the way to go if you want to come home with some fish to eat.

Most of the Offshore fleet is in full Blue Fin Tuna mode, fishing so far has been slow this week. Opening day there were 2 fish killed and one yesterday so that’s not too hot with the number of boats out searching.

We’re hoping some fish show up or what’s here start to feed better before the fleet up north fills the quota. If you’re going, we have plenty of Horse and Select Baitmaster Ballyhoo, Planers, Floro, Crimps, Hooks, Sleeves, Lures anything you might need to catch a giant.