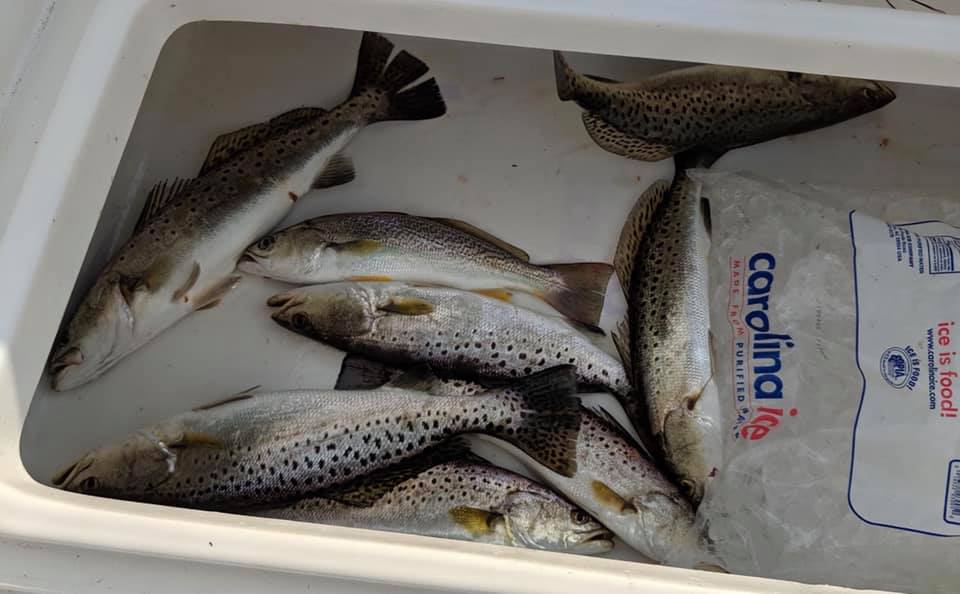 Post Hurricane report…  going to be straight up, I’m not going to report on things we haven’t seen with our own eyes since the storm, because a hurricane always changes things. But one thing for sure, fishing has been pretty good over the last few days!

Speckled Trout Fishing has been great since the storm, we’ve been seeing fish all week long. I’ve had a few customers stop back by with limits of fish, not weighed any monster but some nice keeper fish in the 17-18” range. Most of the action we’ve seen has been up in the marsh areas, we had a trip out yesterday and they found good action around the Haystacks. Also, heard of fish being caught up around the Core Creek area back up toward the Neuse River area. Crazy enough even with the warm water temps we’ve seen some Specks caught in the ocean over the last few days along the beaches. What we’re hearing anglers south of us around the Swansboro area also been seeing good numbers of fish this week with customers coming up from that area buying Live Shrimp. So, I think it’s safe to say the storm didn’t affect the trout bite, looks like with what we’ve seen the last few days it’s only made the bite better.

Old Drum fishing still remains good in the Neuse River area, we’ve ran a few trips up there this week and every trip caught fish. This week, most anglers have been bait fishing on the bottom and doing well.  Anglers using High Water Popping Corks, Blabber Mouths with Z Man Swimmer Z and DOA Airheads fished under them finding some action. This weekend should be good with the full moon, usually this really fires these fish up. We just got some pretty “Fresh Mullet” back in-stock, it’s been hard to come by this week but our guys came through for us. Fish have been from Cedar Island back all the way up toward Adams Creek area. Had some customers stop by earlier for some fresh mullet went to Cedar Island and fishing just a mile or so from the boat ramp and caught 4 nice fish.

Spanish Mackerel bite was pretty slow earlier this week but the water has cleaned up some and the fishing’s been just about as good as it gets. We had a couple of boats out this morning and it was all you want to catch around the Beaufort Inlet area. Casting Spanish Candies was producing the best results for our guys. I’ve not heard of much Spanish action from any of the reefs since the storm, looking like all the fish are starting to stage up around the inlets waiting on the mullet runs to start. Also, I heard of a good bite up around the Cape Lookout area yesterday with the Spanish, Bluefish and even a few False Albacore starting to come to the beaches. I’m sure if you trolled Clarkspoons along the beaches you also can see good results with the Mackerels. Over the next few weeks, we’ll see some of the best Spanish action all year as they’ll start to feed up heavy before they start making their way out of the area next month. So, if you like to catch Spanish now’s the time, weather’s going to be good this weekend and the bite should be on “FIRE” when the winds go north tomorrow.

As far as King Mackerel the bite has been slow, only heard of a very few being caught since the storm. We had a few King guys in the shop last week and I heard the same thing from them. They hadn’t seen much either. One would think with the wind switch coming in a day or two to the Northeast again it will fire back up the Kings. It’s that time of the year when the North West Places should be loaded up and could be right now. Just haven’t had that many people down this week fishing, hopefully; this weekend some anglers will get out there and see what’s going on. It’s also time for the famous East Side to fire off. That’s what it’s known for in the fall; Smoker King Mackerel. We do have Cigar Minnows In-Stock at the shop and plenty of custom “Mac a Hoos” in the shop to go with them.  Dead Cigar Minnows fished on dead bait rigs can be just as good as live bait this time of the year, in the fall they just don’t get as picky as they are in the summer.

We have sold some Crabs and Sea Urchins this week for the Sheepshead guys but haven’t heard anything back or weighed any. I’m sure there are some still around to be caught, but again not many people fishing this week.

We’ve been getting a ton of calls about if any Spots and Sea Mullets have showed up, we’ve seen a few but not any numbers yet. I really think we need a good cold front to push them into the inlets so we can start catching them. Talked to one of our mullet guys this morning and asked him if he’d seen any spots and he said not many. But did say they normally don’t see many until the last week of the month. As far as the Sea Mullets, Sam “The Gitter Man” fished one day this week without much results; just a few fish. He’s fished for mullets for a very long time and he’s saying could be any day when they show up in numbers. We do have Live Bloodworms, Fishbites all stocked up and keeping plenty of fresh shrimp on hand so we are ready when the run starts.

The water’s just starting to clear back up from the storm, we did have some customers fishing from the beach the other day caught a hand full of keeper Speckled Trout. Also, heard of some keeper fish caught off the Oceanana Pier this week, little early with the water temps still up but we’ll take it. Also, since the storm we’ve been seeing tons of small Red Drum along the beaches. I talked to several anglers that’s been catching all they wanted this week; a lot have been under slot but still a lot of fun to catch.

Should be able to get some Spanish off the beach up around Fort Macon in the next day or so. There’s been lots just off the beach so I expect once the water clears, they’ll come right along the beach to feed on high tides. All you need to do is cast “Spanish Candies” along the surf that should get you some action on the Mackerels and Bluefish.

This week, we’ve started to see our first really good signs of our Fall Wahoo run starting up. We’ve weighed fish every day since last Sunday, anywhere from 40lbs to over 60lbs. The good thing to report is there have only been a handful of boats fishing and still seeing some good catches coming back to the docks. The areas have been down south around the Swansboro Hole and we weighed a few fish from the North East corner of the Big Rock area. This week lures of choice have been pretty simple: Sea Witches rigged on Piano Wire with Medium Baitmaster Ballyhoo. Also, Island Lures rigged up the same way has been working well. A lot of the fish have been caught on the planer rod set up, if you’re going to Wahoo fish it’s a must to have one on the boat. We have them in the shop rigged and ready to fish, it’s an important tool when it comes to Wahoo fishing. Also, there’s been some caught on Dinner Bells on the high-speed trolling and we have plenty in-stock ready for action.

So, if its Wahoo fishing come see us, we have plenty of custom Sea Witches rigged up ready to fish along with some custom ILand Lures we just rigged up on wire. Plus, we have anything else you might need for this Wahoo Season.

We did run one bottom fishing trip this week and the fishing was great, limits of Grouper, plenty of Sea Bass, Snappers and Grunts. So happy to say, the storm didn’t mess up the bottom grounds in the area. Our fleet reported it’s better now that it was before the storm. Cigar Minnows, Sardines, Mackerel and Squid Wings all are working well, the fish didn’t really seem all that picky. Our guys fished on the East Side, for some reason the Grouper just like those bottoms a little more, but don’t get me wrong the biggest Grouper we’ve weighed this year has come for the West Side down towards the Swansboro Hole.