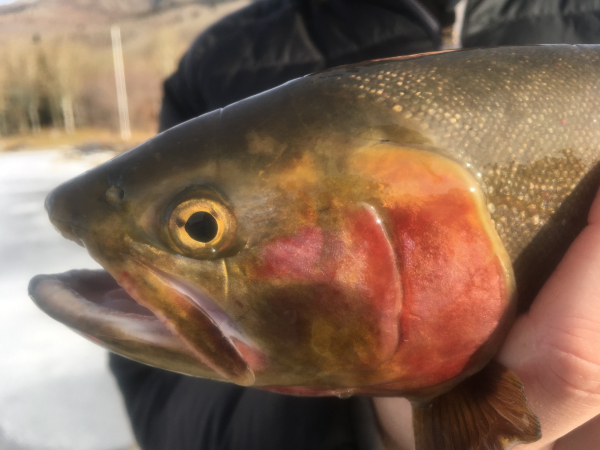 Henrys lake has been hot this year for fisherman and being covered with ice hasn’t changed that. Due to the cold snap this October, the lake froze a bit earlier than usual. Some individuals were seen venturing onto the newly formed ice as early Halloween.

“It is unique to have an ice fishing opportunity this time of year,” says Fisheries Manager Brett High. “Anglers wanting to diversify their fishing experience should try hitting the hard deck for a chance at a trophy trout.”

Ice fishing can level the playing field for anglers without the use of a boats and grants access to areas formerly unreachable without one.

Henrys Lake is a world-famous fishery and produces some of the largest trout in Idaho. Hybrid trout called cutbows can reach up to 10 pounds or more and produce an ice fishing experience that is unforgettable. Large brook and cutthroat can also be pulled through the ice.

Seasoned anglers will spend some time drilling test holes in the ice to figure out where fish are and at what depth they are suspended in the water column. Changing up baits and jigs can also pay off as fish preferences for color and types of bait tend to change throughout the day.

“Fishing on Henrys is usually best for the first few hours around sun up,” says High. “Getting to the lake early in the morning will greatly improve your chances.”

Several access points are available around the lake with the most popular being the Fish and Game Hatchery and County Park which are both plowed with restrooms available. Henrys Lake State Park is often only accessible in a four-wheel-drive vehicle.

Section: Those portions of the lake within the posted boundaries of Staley Springs and within 100 yards of Hatchery Creek

• January 2 through Friday before Memorial Day weekend – Closed to fishing

• Saturday of Memorial Day weekend through January 1 – trout limit is 2, Brook Trout must be counted in the trout limit