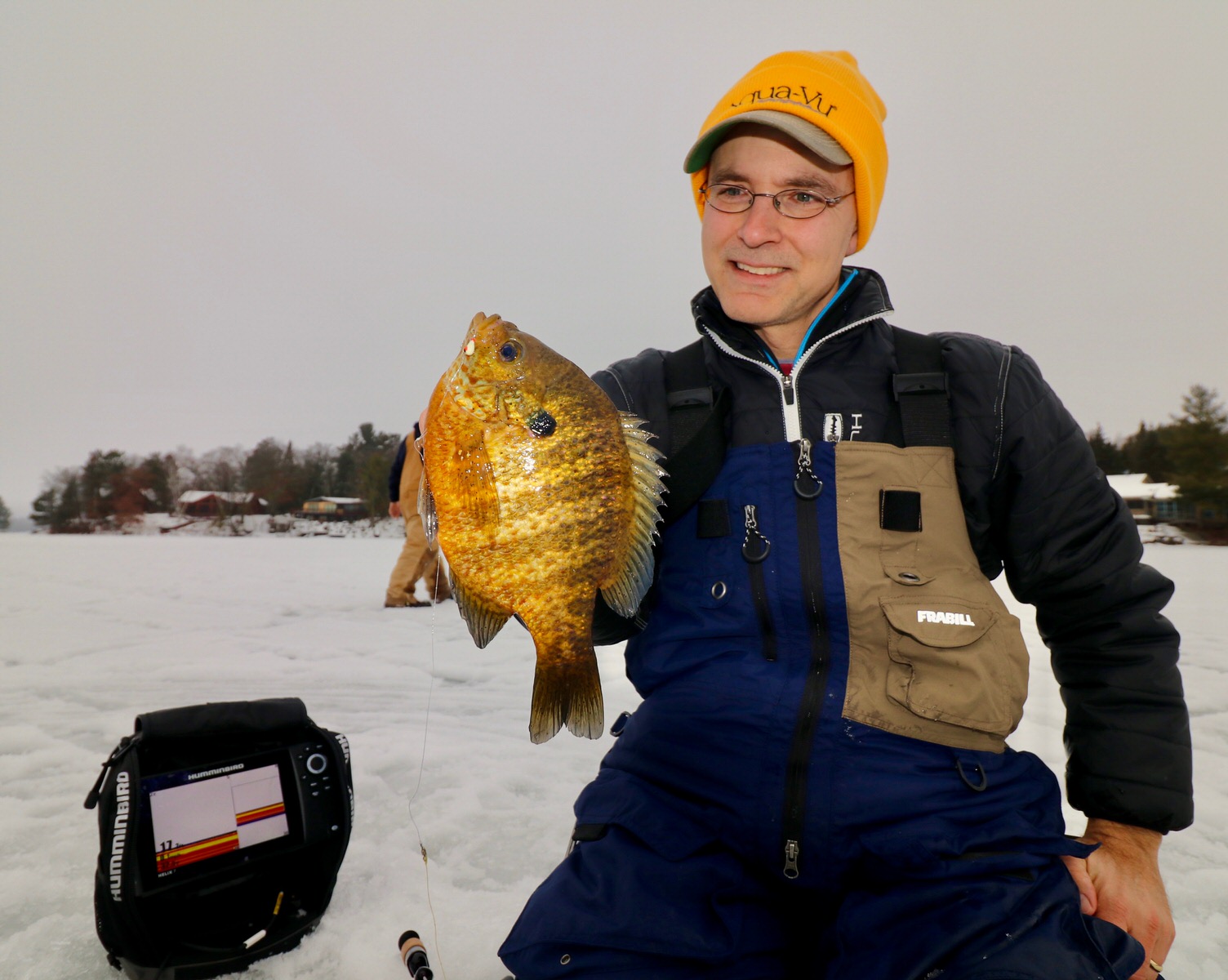 The hi-tech revolution that has reshaped open-water fishing in recent years has also reached anglers who chase fish through holes in the ice. In its simplest form, however, ice fishing need not be more complicated than cutting a hole, presenting a bait, and fighting a fish. And there is no better quarry through the ice, particularly for anglers at the beginning of their long-term love affair with hardwater angling, than the bluegill.

What makes the bluegill such a worthy adversary? First, bluegills are relatively abundant: when you find some, you will have likely found many, and that collection of scrappy fighters can rapidly fill an afternoon on the ice and capture the attention of even the most distracted young angler. Second, bluegills are predictable, typically found in areas that are easy to identify, and with appetites that conform to bankers’ hours. Third, a biology degree is not needed to trick bluegill into biting. Indeed, bluegills are generally quite receptive to both live and artificial baits, just like they are during the warmer months. A modest collection of thoughtfully-selected equipment is all that is required to invite a pail of bluegills to a midwinter fish fry.

Location is everything in the bluegill game

Remember those bluegills that hung around the dock all summer, the ones that so willingly entertained the kids on days when nothing else was working? They’re not under the dock anymore, but they haven’t gone far. At first ice, start looking for hardwater bluegills by walking out to the nearest area of thick weed growth. If those weeds are still green beneath the lake’s icy cap, there’s an excellent chance that they will harbor bluegills. For the largest specimens in the area, you’ll want to focus on the deep weed edge, often found in 10-14 feet of water. In reality, this location is no different from the areas where you chased panfish during the heat of the summer, a useful parallel that connects the behavior and locations of many species during the mid-season “dog-days” of mid-summer and mid-winter. So, if your database includes a couple of prime July or August bluegill holes, don’t be afraid to visit them again in late January or February.

Oftentimes however, near-shore weeds are overrun with tater-tots: juvenile panfish that will briefly entertain, but ultimately frustrate, the intrepid ice angler. If this sounds familiar, leave those weedbeds in the rear-view mirror and head for mid-depth flats, 16-20 feet deep, that are frequently found between the near-shore weeds and the lake’s deep basin. Such soft-bottom flats are home to a wintertime bluegill’s favorite forage: larval forms of aquatic insects that live in the sediment. Large schools of quality-sized bluegills often roam these flats, grazing upon the insect life much like a herd of sheep would munch on mountain pastures. These schools will not be restricted to a particular depth or be closely associated with structure; rather, they will travel to, and remain in, areas that are well-stocked with food. Once the bugs are gone, the bluegills will be too. Bluegills on the flats are highly mobile, so drill lots of holes and keep drilling and checking until you see evidence of bluegills on your fish finder. Multiple, active sonar returns within two to three feet of the bottom is usually a good indication that bluegills are underfoot.

Now that you’ve found some bluegills, let’s catch a bunch. With their primary forage being aquatic insects and larvae, focus on a petite presentation accented with live bait. A 4 mm tungsten jig adorned with a couple of waxworks or spikes is a great place to start, as this compact presentation is an excellent representation of the bluegill’s favorite winter prey. Tie that jig to supple 2-4 lb test fluorocarbon, like Seaguar Blue Label, using a double surgeon’s knot or other loop knot. Those knots dramatically reduce fish-repelling jig spin, an unnatural action that can significantly reduce bluegill catch rates. Chase bluegills using light power ice rods, like the Croix Custom Ice CI24LXF from St. Croix Rod, which can be equipped with a hypersensitive spring bobber to detect even the lightest of bites.

Bluegills are typically easy to find and are generally receptive biters. Nevertheless, some simple refinements to your hardwater strategy will bring more of these scrappy fighters to hand. First, reduce your jig stroke to a subtle shake. This is not the time for large, 1-2 foot motions of your jig through the water column. Rather, the best bluegill jig motion is often a simple quiver, the kind that you might produce after that 3rd cup of coffee. Keep your quivering offering at the same depth, or just a few inches above, the bluegill returns that you see on your fishfinder, and bites will follow in short order. Second, recognize that bluegills are often harbingers of things to come. When your hot bluegill bite suddenly turns ice-cold, it’s time to start preparing for a bass or pike bite; don’t be surprised when one of those predators appears on your electronics. Finally, be prepared for your bluegill hotspot to evolve into crappie town as the sun sets. These speckled panfish are drawn to the same food sources as the bluegill, but are typically more active at dusk and through the night. So, if you’re looking for a place to park your hard house for a long weekend, a mid-depth flat that is packed with bluegills by day will frequently be overrun by crappies under the cover of darkness.

For many anglers across the northland, ice fishing is far more than a simple pastime. Indeed, for the few brief months when ice caps our favorite lakes, dropping baits through holes in the ice is an addiction, albeit a healthy one that gets us outside and brings us together with family and friends. Enjoy it while it lasts!