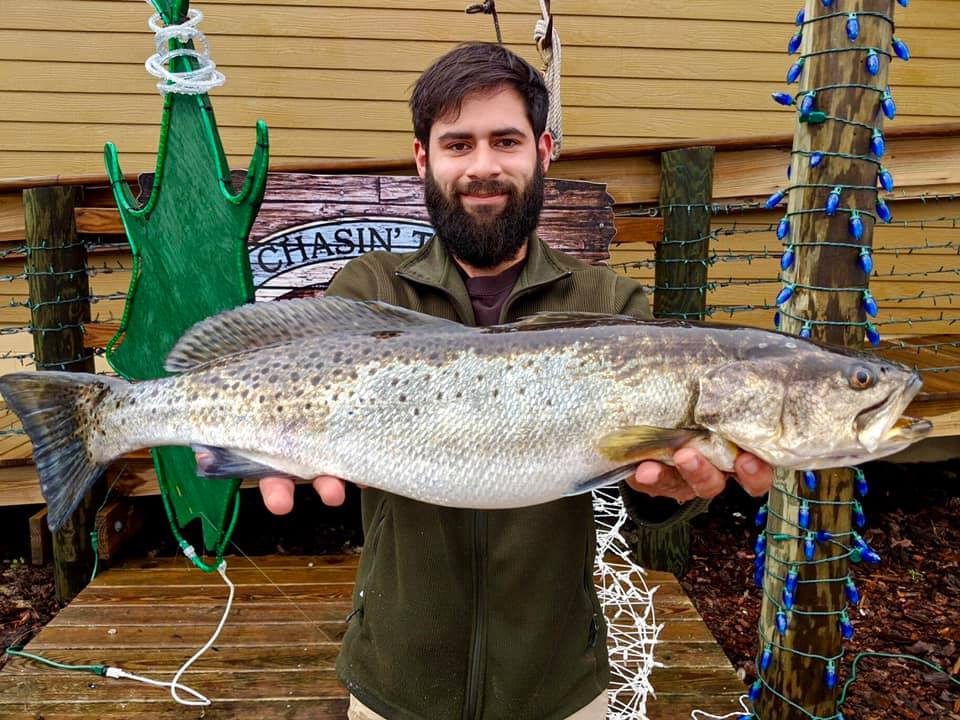 Hard to believe, we’re already starting to stock up for the 2019 Season, we hope you all had a Merry Christmas and Happy New Year. So far this winter, we’ve seen a pretty mild winter with the last two weeks hanging in the 60’s and few days in the 70’s. It’s still a long way to go until we see Spring but let’s all hope the temps stay mild this winter which will greatly help our fishery going into the Spring / Summer Season.

We still have huge numbers of small Speckled Trout all over the place, usually they’re long gone by now. But with warmer than normal water temps the fish just haven’t made their push more south. Still having customers coming in the shop that are catching 100+ trout a trip without any issues. Now keep in mind these fish are what I like to call the year’s class of fish because most of them are just under the keeper size limit of 14”. But anglers that are still fishing for them are catching their limit pretty easy picking through the small ones. We still are weighing trout ranging 4lbs and even into the 6lb class over the last few weeks. Areas where these fish are being caught has been pretty simple, either in the back of the creeks and rivers or at the Rock Jetties. Had a customer just the other day catch his limit at the Radio Island Jetty fishing some of our custom 18MR Mirrolures, which is way late for that area. That’s usually an October / November spot when those fish are moving out to the ocean. Best choices of lures and baits have been Live Mud Minnows, Mirrolures, Z-Mans, Vudu Shrimp, Rapala Twichin Raps and Betts Halo Shads or Betts Shrimp. Just keep in mind it’s wintertime so the bite can change day to day they don’t feed every day this time of the year, just a few degrees rise in water temps can really make a huge difference on how well the bite will be. Just a few degrees in dropping water temps can completely shut the bite down this time of the year.

The other best fishing has been at Cape Lookout Rock Jetty, we’ve been seeing good numbers of Red Drum, Black Drum, Sheepshead and Speckled Trout. The Jetty system has been acting a little different, seems when the water temps drop the jetty fishing is better than the back-water fishing, we’re seeing on the warmer days. Of what, we’ve seen Bait Shrimp and Live Mud Minnows have been working the best for us. Some days during the last few weeks, we’ve had some action on Z-Man and Mirrolures but seems like the bait side of things can make a huge difference in catching fish.

Our winter Puffer Fish run has started, anglers fishing the Radio Island beach have been seeing good numbers of fish and the Fort Macon area also has been having some fish to catch. Now, those two spots have been more for the surf anglers. If you’re looking for them from boat best place is going to be up at Cape Lookout along the beach and inlet areas. Best way to catch them is with Fishbites and Bait Shrimp just fished on the bottom. Pretty funny story, I was telling a customer the other day how good these fish were to eat. The next day, they came back by the shop and said we need more shrimp we got to go catch some more Puffer Fish (lol) stating they are some of the best fish we have ever eaten. Yea, they might be small fish and might not put up that much of a fight but you can’t take it away it’s some of the best meat from the ocean. When fishing for Puffers, you’re also going to catch some Pig Fish good numbers of them also in the area.

I’ve been getting some calls about the Bluefin Tunas, which the bite has been off since the weather warmed back up. What I know there has only been a few killed in last couple of weeks, I really think we will see some more fish show up if the temps drop back down more like wintertime. We still have all the gear you need and bait. We’re still getting reels ready as we speak to fish for the next few weeks for anglers. Most of the guys that are hardcore keep telling me it’s not over, they’re waiting for the weather to get right and go back to catching them.

Bottom fishing has been very good, Trigger Fishing has been just about as good as it can get if you are in the right area. Part of our charter fleet went out the other day not too far off the beach and filled the boat with in just a few hours of fishing, two fish just about on every drop. Along with the Trigger fish catching plenty of Sea Bass, Snappers and Groupers which keep in mind is closed now.

We are still seeing good numbers of Wahoo in the area, now I haven’t talked to anyone that’s been in the last two weeks but then the bite was still on fire around the Swansboro Hole. Also, kind of crazy as these fish are usually way down south by now. It’s kind of like this in the winter, Bluewater fishing can be hit or miss, really look at the water temp charts before you go. If you see some really good warm water breaks more than likely there will be some fish in that area to catch. Our Spring Wahoo fishing will usually fire up early March which is not too far away. We might just see this all the way through the winter right into when the mass of the fish shows back up.

Wish we had more to report but as I look back to last year’s report at this time it’s way better fishing. This time last year we were in our winter freeze when we saw temps below freezing for weeks, so I will take the 60’s and mild weather over that any day.