Home Fishing A Jig For Every Season 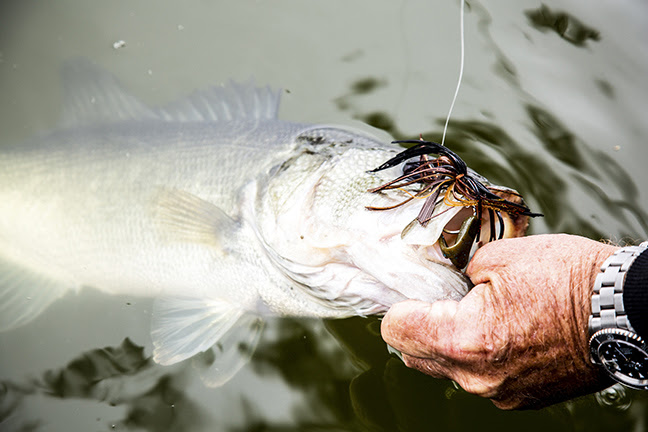 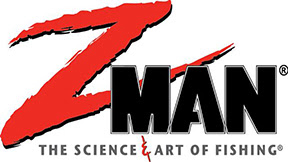 “I don’t think anyone knew how picky I was going to be when we got into designing these high-level bass jigs,” says veteran bass pro David Walker, with a friendly laugh. For the self-admitted jig-fishing junkie, the opportunity to brainstorm, build and customize an A-to-Z line of jigs felt like assembling a dream team of bass-catching baits.

“A jig is the definitive fishing tool,” says Walker, who credits a skirted jig for the majority of his $1.9-million tournament winnings. “A jig isn’t a regional nor a seasonal bait, like so many others in your box. There’s not a body of water in which a skirted jig won’t catch bass. So, to finally have access to a year-around line-up of jigs—built to my own persnickety standards—that’s pretty cool.”

Recently, the easygoing Tennessee based angler unveiled the contents of his tournament jig box. 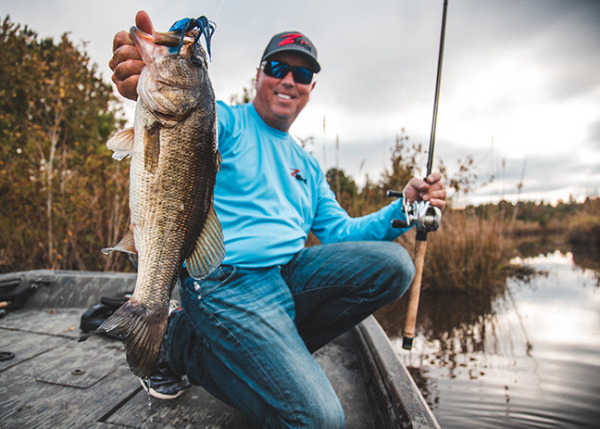 Walker’s pick: “My all-time go-to is a black/blue CrossEyeZ™Flipping Jig with a Z-Man BatwingZ™ trailer. I’ve made most of my money on a heavier 5/8-ounce jig, but I flip a ½-ouncer more often, as it’s a little more versatile.”

Where & when it shines: “Any time I’ve got any heavy cover at all—brush, grass, trees, docks—I’ll flip a jig in there. A jig is the best tool ever for reaching and appealing to big bass in dense cover. It’s an obvious choice in spring, but I fish this jig summer and fall, too—anytime bass are hunkered down in heavy cover.”

Jig tech: “One key to the CrossEyeZ Flipping Jig is its head design, which slides it cleanly through cover, every time, without getting stuck. Most flipping jigs have weight-forward heads that hang-up on limbs and obstructions. The head on the CrossEyeZ is slightly flattened and tapered back so it slips right on through. Another sweet detail is the jig’s hand-tied skirt, pinned permanently in place with copper wire. The skirt lasts as long as the jig itself; you’ll never pull it out of your box with a broken rubber band and a pile of silicone strands.

Trailer talk: “Buoyant ElaZtech is an awesome trailer material and the BatwingZ is so tough you can hook it once right through the body, just like we did with old-school pork-rind. Love the flattened, oversized claws that flap and wave actively. At rest, the claws float up, mimicking the defensive posture of a live crawfish.”

The scoop: An ace shallow water angler, Walker flipped his way to a hefty 32-pound bag of bass at the 2019 Major League Fishing (MLF) Tour stage at Lake Jordan, NC, finishing atop the leaderboard during the Shotgun Round. Flipping jigs proved a dominant pattern a few weeks later, too, when Walker fished the willow bushes at Chickamauga Lake, TN.

Walker’s pick: “For heavyweight, ball-and-chain style fishing—casting and dragging— give me a ¾-ounce CrossEyeZ™ Football Jig with a 4-inch Turbo CrawZ all day long. Two hot colors are “Smoked It” and “Plumkin,” green pumpkin with a splash of bright purple.

Where and when it shines: “I start fishing the football early in prespawn when bass are still in slightly deeper, winter type areas. During prespawn, I’ll go back to this killer combo, rolling the jig up and over ledges, points and gravel, often on offshore structure.”

Jig tech: “The CrossEyeZ Football Jig is designed to pivot and roll as it slides across the substrate. I like the heavier ¾-ounce size for longer casts and solid bottom contact. The money presentation is a sideways pull of the rod; you don’t want to lift the jig. Just drag it along and let the pivoting jighead and long shank 5/0 hook activate the skirt and trailer.

Trailer talk: “The Turbo CrawZ™ is a high-action crawfish bait that couples really nice with a football jig. The smallest rocking motion of the jig really get the claws waving and vibrating. The toughness of the ElaZtech material means you can often fish one bait all day long.”

Walker’s pick: “I’ll take a 3/8-ounce CrossEyeZ™ Snakehead Swim Jig in the color they call “Shad Spawn.” Pair it with a Turbo CrawZ or DieZel MinnowZ™.”

Where and when it shines: “My favorite place to throw the Snakehead Swim Jig is around docks in marinas. You can skip this jig way up under docks, and it won’t hang up on cables, pilings or obstructions like other baits. The late spring shad spawn is a key time to fish this pattern, whether it’s around docks or shallow grass. I love fishing this jig because it’s often a shallow, visual thing, where you’re seeing bass before casting to them.”

Jig tech: “We shaped this jig to mimic a snake’s head—the most adept animal at slithering silently through forests of cover. The jighead is animal-like, not geometric. Also has a flattened underside that helps the jig plane up on the retrieve, so you can use heavier weights for longer casts. On 30-or 40-pound braid, I can throw or skip a 3/8-ouncer a long way.”

Trailer talk: “You want a trailer with a high-action tail that does all the work. The DieZel MinnowZ is an awesome shad imitator. The Turbo CrawZ gives me just a bit more movement in dirtier water. As they say, I like any color so long as its white.”

Walker’s pick: “In certain situations, a 3/8-ounce CrossEyeZ Power Finesse Jig and TRD CrawZ combo is a great substitute for a bigger flipping jig. Z-Man’s “Pond Scum” pattern is one that’s gotten me a lot of bites.”

Where and when it shines: “Anytime I’m flipping in really clear water, the Power Finesse Jig can be the way to go. In clear water, fish get a great look at what you’re throwing and really respond to those artsy-style colors—combinations of dark and bright silicone, together. I also throw the finesse jig in winter, particularly along steep bluff banks. Cast right against the bank, and work down into 6, 8 and even 15 feet. Let the finesse jig freefall off rock ledges, but otherwise keep it on the bottom.”

Jig tech: “The Power Finesse Jig has a golf-ball shaped head and a compact profile that appeals to less aggressive or pressured bass, or fish that might be overwhelmed by a big flipping jig in clear water. The jig has a short-shank 2/0 flippin’ hook. It’s not a light wire hook, so you can still pitch it into cover knowing it won’t open up on you. Like the other CrossEyeZ jigs, this one’s got hand-tied skirts and a lock-tight trailer keeper.”

Trailer talk: “The little 2-1/2-inch TRD CrawZ™ is known as a Ned Rig bait, but it’s a perfect match for the Power Finesse Jig. Colors like Mudbug pair up well with that Pond Scum-pattern jig. The CrawZ has super buoyant pinchers that flap back and forth as you retrieve the jig, and then wave up of the bottom when you pause. Bass eat this thing like crazy.”