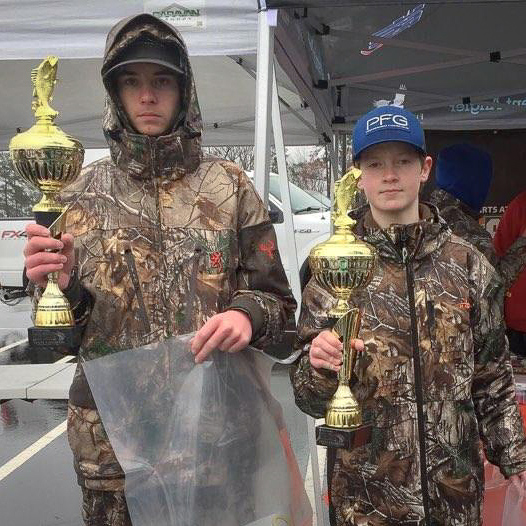 It was not a propitious morning for a fishing tournament.

At just under 40 degrees at 7 a.m. last Saturday, driving rain kept distant any hope of relief from the sun. Neither Konner Kinlaw and Corbin Yow had ever fished competitively before.

They could have easily decided against sitting on a lake for eight hours. But if they had, the Union Pines freshmen wouldn’t now be North Carolina’s state high school fishing champions.

So they got into the Ranger bass boat owned and driven by Kinlaw’s father Derek, who volunteered as their team captain, and set out with 37 other intrepid pairs. The contestants included three other teams from Union Pines: Max Berge and Tanner Gross captained by Jamey Caldwell; Will Baddour and Thomas Ring captained by David Reynolds; and Zack Adams and Jason Morrison captained by Tommy Young.

They’re all members of the school’s fishing club, which science teachers Rick Johnson and Bill Moore started three years ago.

“When the kids started coming in, we asked them what they wanted to do,” said Johnson. “We thought it would be lure trading and telling fish stories and that kind of thing. But what happened in the first year was about four guys said they wanted to fish competitively.”

So they got involved with the national Student Angler federation, which for the last few years sanctioned a joint North Carolina-Virginia championship at Kerr Lake in Vance County.

This year, the North Carolina competition moved to the Shearon Harris Reservoir southwest of Raleigh. Of the 60 teams registered, about two-thirds showed up to fish on a dismal Saturday morning.

Each team had until around 3 p.m. to catch up to five largemouth bass. The team with the largest catch, by combined weight, would be declared the winners. The unlucky fish that day got off easy; they were kept in live wells and returned to the lake after weigh-in.

“It was miserable in the beginning. It was raining and cold, we couldn’t feel our hands,” said Konner. “It was just horrible. But after the rain started to slow down we moved up because we figured they’d move up and start feeding, and that’s when we started getting our bites.”

It turns out that bass aren’t any fonder of the cold than the fishermen trying to catch them — and the humans at least had the benefit of insulated rain suits and a no-strings-attached supply of snacks.

“I was losing all hope,” Corbin recalled. “If it’s a warm day and it’s raining, the fish come up to feed. But if it’s cold and miserable and 40 degrees like it was, nothing wants to move.”

So it was well past noon before the pair caught their first fish. What they didn’t know at the time was that all the other teams were having similar luck. By the end of the day, only nine teams returned with bass.

Per the N.C. Wildlife and Resources Commission rules at Shearon Harris, bass that measured in the “protective slot” of 16 to 20 inches were immediately thrown back in.

The first two bass Corbin brought in fell within that slot, but after a discouraging morning the tides finally turned. Konner caught two more after that — one measuring 15 inches and another just under 21 inches but safely over the protected length.

“We weren’t feeling that confident, but once we got the first fish we started going as hard as we could,” Konner said. “‘Hold ‘er wide’…. it’s just what we were saying out there. It was like our motivation. We just had to hold ‘er wide, you know.”

“There are always good days and bad days,” Corbin added. “You can’t let it faze you. We just had to keep on fishing, no matter what.”

When 3 p.m. rolled around, neither had a clue that their catch would be their ticket to the Student Angler Federation’s national championship tournament.

“We were just happy that we had some fish to weigh,” said Konner. “We really did not think that we were going to win. There were professional fishermen out there as captains and we figured that they would have a big advantage.”

Their two fish weighed a total of 6.78 pounds, beating out the next best catch of the day by about two ounces. The victory, Derek Kinlaw figured, was a just dessert for what otherwise would not have gone down as a good day on the lake.

“The high was 42 and I don’t think it stopped raining. We were going 60 miles an hour across the lake in the rains at times,” he said. “Being out there and being their loyal servant and keeping them motivated, they got really down and they did show a lot of character and it built character being out in those elements.”

The national fishing tournament is scheduled for June 19-22 in a pair of Tennessee River reservoirs near Florence in northern Alabama.

For information about the Union Pines fishing club or Konner and Corbin’s trip to the national championship in Alabama, contact [email protected]