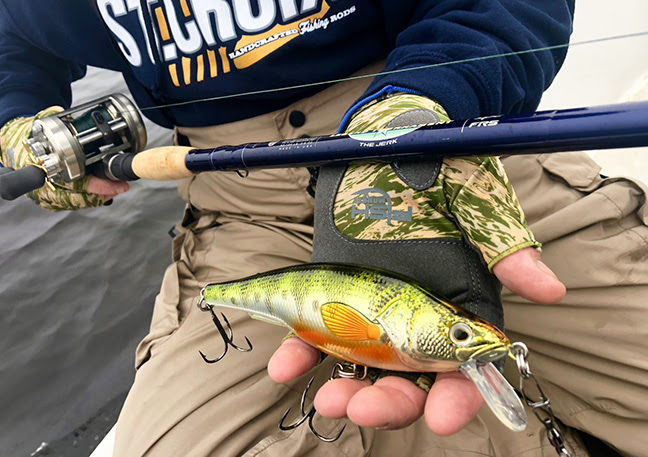 Niagara-on-the-Lake, ON – For muskie anglers, there’s no time like late fall. The probability of boating big fish greatly increases as giants go on the prowl. With the transition to colder weather, these apex predators strap on the feed bag and the fishing can be incredible, so don’t put away your gear too soon.

What’s the best late-fall program? While casting works, trolling is hard to beat right now. You’ll want to bang bottom as much as possible, and also make periodic changes to your trolling speed for an erratic presentation. You’re trying to trigger fish with both of these tactics, and relatively shallow, rocky points are prime places to score.

LIVETARGET’s Sucker Stickbait is a champion lure to consider in such presentations. Available in two sizes – a 2-½-ounce 6-¼” model and a 3-ounce 8-¼” model – it also comes in four patterns including White Natural/Metallic (129), White Natural/Smoke (128), Redhorse Metallic/Olive (126), and brilliant Torrent Metallic/Red (125). Fished on a thin, 80-pound superline and an 18-inch wire or fluorocarbon leader, this master of muskie mayhem is a great late-fall producer.

As previously mentioned, late-fall fishing brings the potential for big fish, and strikes can be especially violent. Purpose-designed trolling rods like St. Croix’s heavy and extra-heavy power Mojo Musky Trolling Rods have the sweet, moderate action that absorbs the shock created when the largest of muskies slashes the bait, and then keeps her firmly pinned all the way to the net or cradle.

Trolling across shallow rock points can be tricky business. You’re getting into the danger zone, but that’s all part of the game. You need to come over the point and feel the bait banging the bottom. That’s when you back the rod off to let the bait float up… and that’s often precisely when you’ll get bit.

Varying your speed can also trigger more strikes while trolling. Cast a good distance behind the boat and begin trolling three or four mph. Occasionally kick up the speed to five or six mph. What works best is periodically giving the bait short bursts of speed from the motor. Unless the bait does something different – bangs off rocks, speeds up, or slows down – muskies may just follow and not strike. The lure should have the appearance of trying to escape or doing something chaotic in order to trigger the muskie’s response.

The LIVETARGET Sucker Stickbait’s buoyancy is one reason the lure works so well when trolled. When you do bang bottom and hit rocks, it takes only a little repositioning of the rod tip and the lure floats up. This factor, combined with its high-flash energy and soft rolling action, creates a lot of bites.

Any rocky point can hold muskies in the fall, but the bigger main lake points typically hold bigger numbers and are the places to look first. The same goes for especially steep – almost vertical – breaks with large boulders. Rock reefs, humps and saddles can also be high-percentage areas in the fall, especially during the cisco spawn.

That’s one of the key patterns for really big fish during October and November. As the water gets down into the low-to-mid 40s, ciscoes spawn on shallow rock and gravel reefs. Of course, the muskies follow. Since ciscoes spawn at night, a lot of anglers catch the biggest fish well into November during nocturnal hours, especially during the presence of a full moon.

Casting is another way to effectively fish the versatile LIVETARGET Sucker Stickbait. Seasoned big muskie anglers also use live suckers and float rigs in the late fall, and the Sucker Stickbait is the ideal throwback or bait-and-switch option to maximize conversion. Use it to attract and draw fish to live bait rigs positioned around rocky areas or the last remaining deep cabbage weeds, which can also be premier areas for muskies late in the fall. Remember to work the bait erratically to fire up fish and trigger more strikes.

Biologists’ diet studies of big muskellunge prove that juvenile pike – even medium-size pike – are one of the muskie’s favorite meals. That means the the LIVETARGET Juvenile Pike Swimbait is a fantastic bait to break out during late fall. In terms of realism, the adolescent body profile and anatomical details combined with the signature Oscillator tail creates an incredibly lifelike offering. Not only does the bait look realistic, the Oscillator tail generates the natural swimming action of a young pike on the retrieve.

It’s a rugged bait, factory rigged with twin, extra-strong double hooks to maximize hook-up ratios and provide better balance without having to re-tune frequently. Its design makes it easy to slide through cabbage weed, and with a medium-slow sink speed, you can easily customize its running depth, despite the 11-¼” model’s hefty 8-5/8-ounce weight.

Longer rods pay dividends when fishing swimbaits. Designed for maximum casting distance, deeper figure 8’s and ease of storage and handling on and off the boat, consider St. Croix’s telescopic Mojo Musky casting rods. These 8’6” and 9’ rods easily collapse to 7’6” and 7’10”, respectively, for simplified maneuverability, transport and storage, without sacrifice to their big-bait and big-fish handling performance.

While late fall can mean brutally cold weather, today’s high-tech clothing options make it easier to chase the biggest fish of the year. And LIVETARGET Lures make it easier to catch them. Our advice? Don’t mothball the boat too early this season and remember our tips. Whether trolling or casting, create muskie mayhem and maximize hookups by deploying the right LIVETARGET Lures in the right locations with the erratic presentations that fat, late-fall muskies can’t resist.