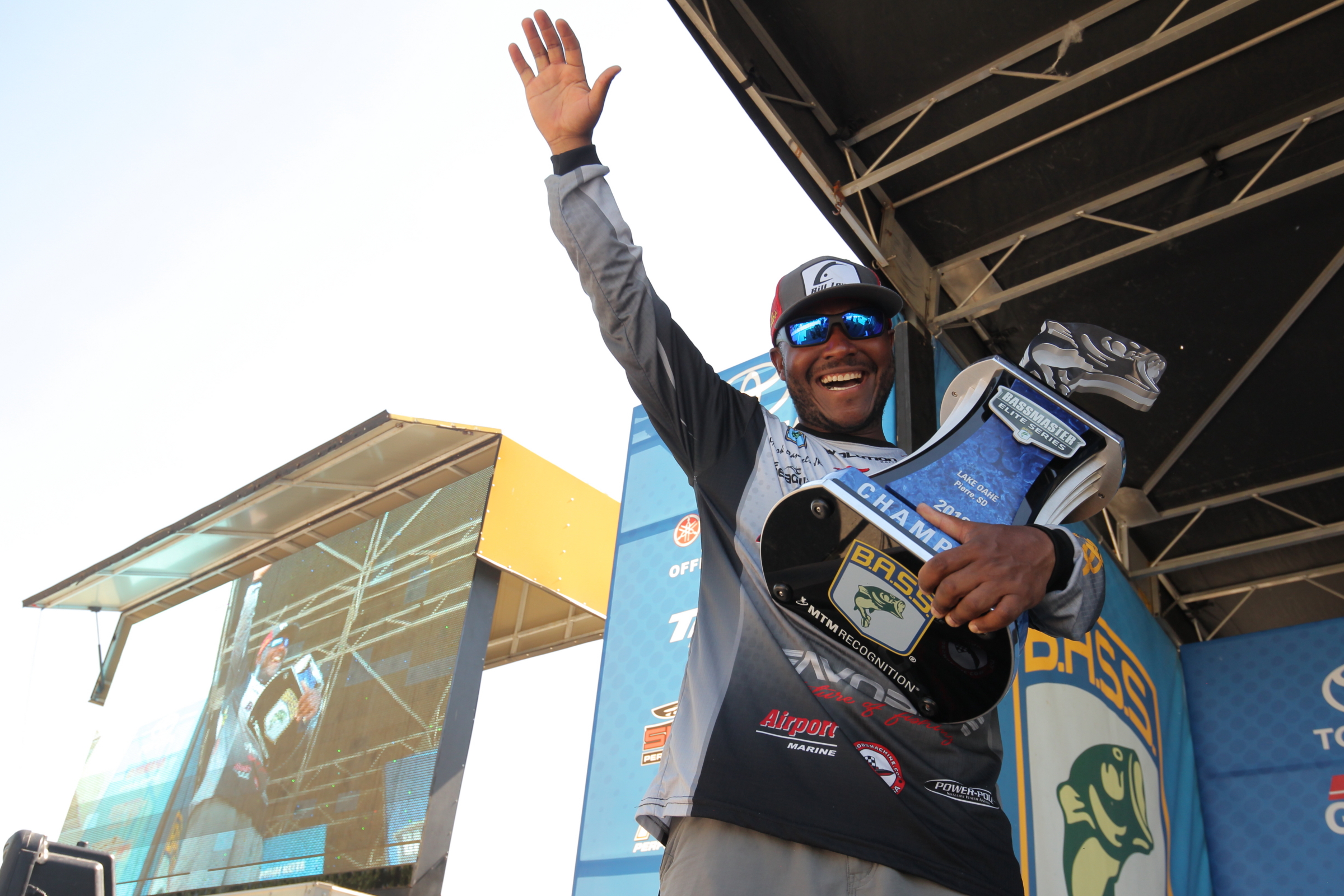 For the first time in four days, the wind and waves were calm on mighty Lake Oahe. Mark Daniels Jr. was not. The Alabama pro started Championship Monday with a lead of more than 6 pounds over the rest of the field.

However, he struggled to get bites from the bigger bass he needed, and it seemed the Berkley Bassmaster Elite at Lake Oahe presented by Abu Garcia was slipping through his hands.

Former Bassmaster Classic winner Casey Ashley was reported on Bassmaster.com to have caught up to Daniels. However, when the scales settled, Daniels’ last-round 13-pound, 3-ounce limit was enough to take home the big blue trophy. His final tally was 69-9, besting Ashley, the runner up, by more than 3 pounds.

“This is a special place in South Dakota! Beautiful place, beautiful people and an awesome fishery. There is nothing you can complain about here,” Daniels said before getting emotional over his very first Elite Series win. “I have literally dedicated my life to this sport. And I never gave up. And let me say one thing, if anyone out there has something they love, pursue it. I’m living proof you can live your dream if you are willing to work for it.”

And Daniels worked hard for it this week. He found an area where postspawn bass were congregating after the spawn, and he used finesse techniques to catch them. “I was fishing deep points adjacent to shallow flats. The fish were pretty finicky, so I relied heavily on a Finesse TRD soft-plastic bait by Z-Man with the mushroom head (Ned rig), and drop shotting a Z-Man Finesse WormZ,” Daniels explained.

Although the majority of the field was drop shotting, he believes he was doing something a little different. “Instead of using the worm in a traditional manner, I was wacky rigging it on the drop shot. Plus, I was able to scan around my boat with my Garmin Panoptix. This allowed me to see fish 60 feet away and then cast to them. That was crazy important as the event went on because I wouldn’t spook the bass by getting too close.”

Daniels’ victory was especially meaningful to him because it came a week after veteran Elite Series angler Ish Monroe captured the Bassmaster Elite at Mississippi River presented by Go RVing. It is the first time African-American anglers have won back-to-back Elite Series events.

“Following up Ish’s win with a win here for me is monumental. Historic. As a black man representing this sport, I feel overwhelmed at the moment. I hope this inspires more people in the black community to get involved in the sport that has made my dreams come true,” Daniels said.

Ashley made a serious run at the title, bringing 16-9 to the scales today for a total of 66-5. The biggest limit of the day, however, was weighed in by Clifford Pirch. His epic comeback from 87th place on the first day of the event to a third-place finish was emphasized by the 20-pound, 11-ounce limit of bass he weighed in on Championship Monday. His monster catch included the Phoenix Boats Big Bass of the day, a 4-9 smallmouth. The $1,500 Phoenix Boats Big Bass bonus of the tournament, however, goes to Fred Roumbanis, who weighed in a 5-6 smallmouth on Saturday.

Bradley Roy, who chalked up a solid sixth-place finish on Oahe, climbed to the top of the Toyota Bassmaster Angler of the Year points race. He was awarded $1,000 for taking over the top spot.

The Oahe event was the seventh of nine regular-season tournaments on the prestigious Bassmaster Elite Series, and it marks the first time in B.A.S.S.’s 50-year history for the organization to hold a professional tournament on the 370,000-acre impoundment.

Next up is the Huk Bassmaster Elite at Upper Chesapeake Bay presented by Mossy Oak Fishing. The event is July 26-29 in Harford County, Md.