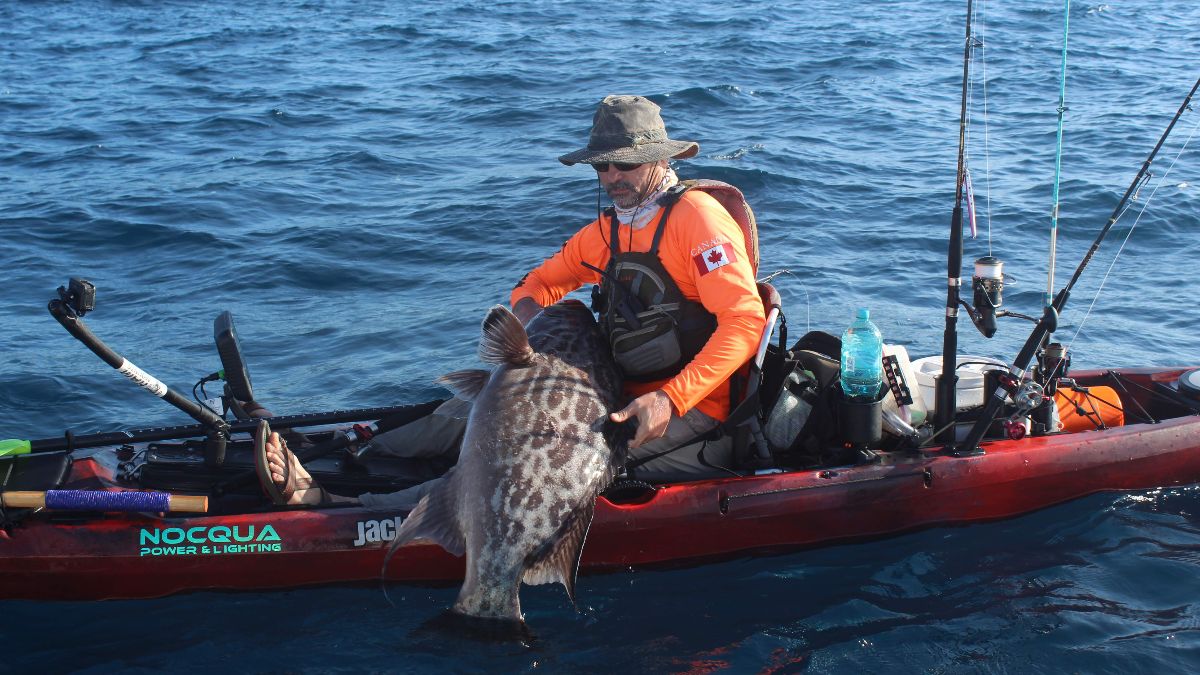 James McBeath, from Carleton Place finished on top at the Los Buzos World Kayak Fishing Championships held in Cambutal, Panama this past week.  Competitors qualified from tournaments across the globe filling the field with anglers from countries like Australia, Singapore, the US, Germany, Switzerland and Canada.   McBeath beat out all athletes over a 5-day tournament period where the best 3 days counted towards the championships.

Competitors were in fishing kayaks and battled the Pacific Ocean, its winds, large break, strong currents and sun to bring in fish that peaked in the hundreds of pounds.  James cemented the victory with a final day tally of over 70lbs and from the only paddled kayak (Jackson Kayak Kraken) as all other competitors were in pedal powered kayaks.

“It was one of the toughest kayaking experiences I’ve ever been involved in,” noted Mr. McBeath, a Jackson Kayak Factory team member. “All of us were exhausted at the end of each day both from the kayaking and from dragging these monster fish up over 100 feet each time!”,  James adds, “This fisheries is one of a kind as it is very easy and safe access from the resort.  Having a chance at a good many bucket list fish is incredible”.

McBeath also notes that the adventure included some core kayak anglers, “These folks joining me on the water were not only experienced anglers but some of the highest quality of individuals one can hope to share water with.  It was fun both on and off the water!”

This is James’ second world championship as he holds the 2012 World Musky Fly Fishing Championship title as well.  James has also qualified for the 2019 KBF National Championships being held in March; destined to make 2019 a banner year for James.

Rounding out the podiums were Merv Low of Singapore and Lance Clinton of Costa Rica.  McBeath had a comeback tally on the final day that put him a mere 8 lbs over the closest competitor, Low.  His final day catches included Broomtail Groupers and an Almaco Jack that weighed in at just under 50lbs for the win.

About James McBeath
James is Jackson Kayak’s Marketing Director and works out of Carleton Place, Ontario, Canada.  James grew up in Gloucester, east of Ottawa and has spent his life kayaking and fishing.  He is a regular guest on the Jim Sammons Kayak Fishing Show and has his own series of videos out on the Jackson Kayak Youtube Channel.  James is sponsored by Jackson Kayak, Blue Sky Boatworks, Orion Coolers, Seaguar, Yakattack, Lighthouse Lures, Nocqua and Kokatat.

About the Los Buzos World Offshore Kayak Fishing Championships
The Los Buzos Kayak Fishing Championship series was designed to seek out the best kayak anglers from around the globe and face them off against each other on equal footing at one of the best offshore kayak angling locations in the world, Los Buzos Resort, Panama.  With qualifying events held around the world, winners from several kayak fishing tournaments and a few carefully chose invites from around the world, this tournament is aimed at proving who some of the best kayak anglers in the world are.  The tournament was held at Los Buzos Resort Panama January 5-11 2019 with competitors competing for the grand prize of $10.000 – winner take all!   More details on Los Buzos Resort here:  www.losbuzos.com