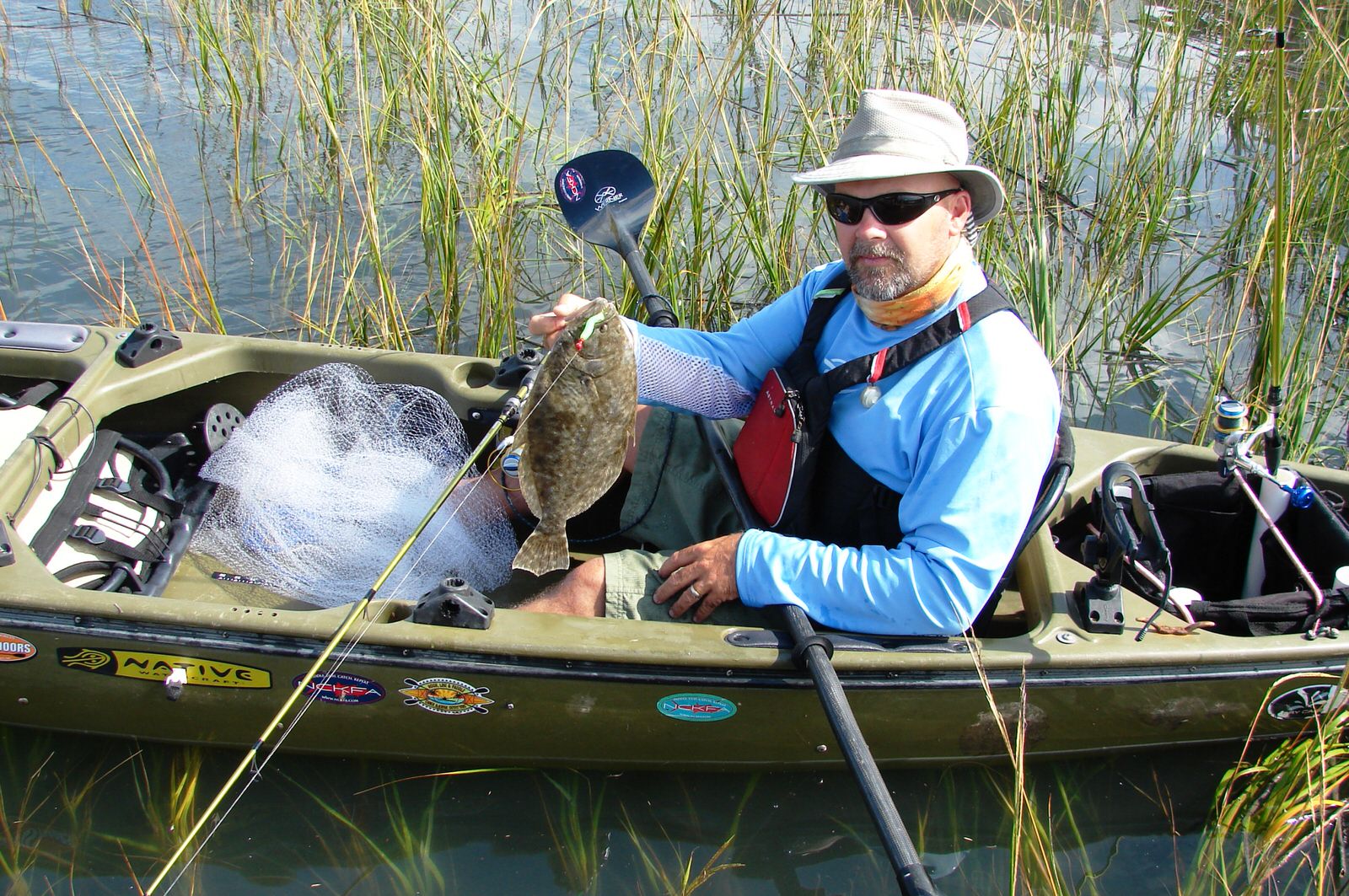 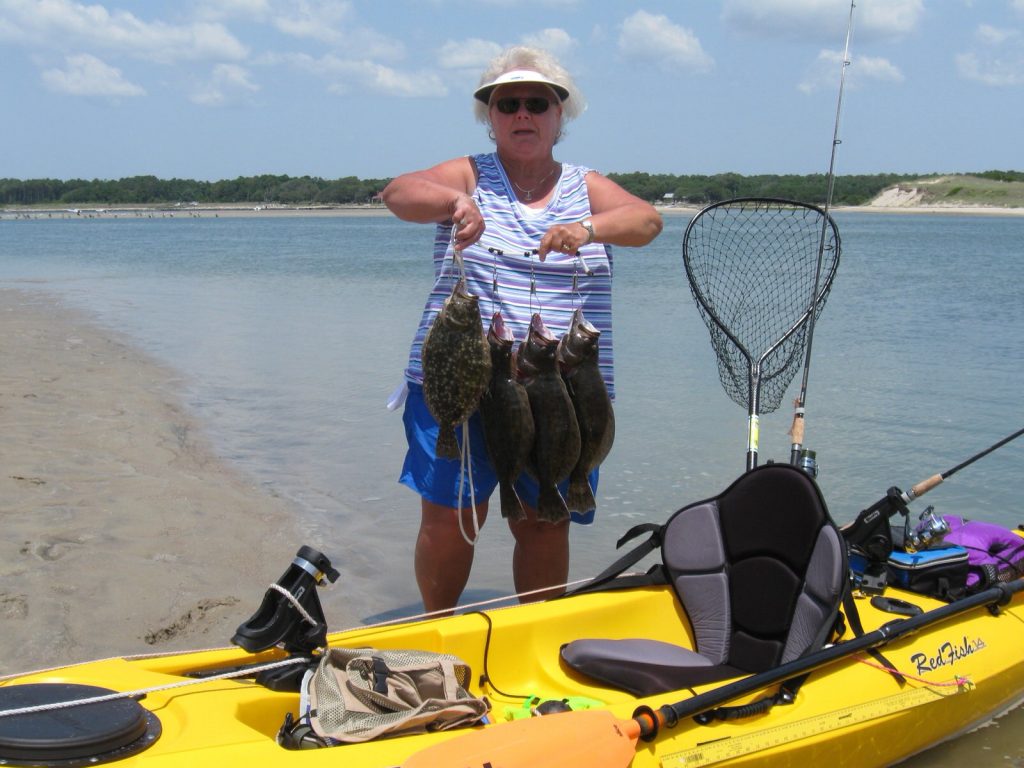 I was probably already doing this some, but as I began kayak fishing I learned just how many fish I drift or paddle over.  We are all programmed to want to sit in the front of the boat and have the first cast at fish, which should give the best opportunity to land the biggest and most fish. However, I’ve found that fishing a trailing line accounts for a lot of strikes – actually a surprising number of strikes – and it’s smart fishing.

Many times I check out a fishy section of bank or an oyster rock by drifting along it.  This is true whether I’m in my boat or my kayak.  Something just looks like it will be holding fish, but it’s more area than I can cast to, so I set up a drift and fish along it.  Sure, I could anchor or set my Power-Pole and fan cast an area, then move, set back up and fan cast again, but I usually choose to drift feeling I can cover it quicker.

If I’m fishing alone in my boat or in my kayak, I can only cast one line and that gives me the opportunity to miss fish. Because of this, I usually put a line out the back and let it bob along as I move.  Sometimes I drift two lines.  It’s a good idea and I’m no longer surprised at the fish I catch on these lines.

There are basically two ways to fish a trailing line. If the bottom is fairly clean, it can be dragged across the bottom for whatever might be feeding there.  If the bottom has a lot of snags, the trailing line can be set up as a float line, with the depth adjusted to keep the bait just above the snags.  There are also times, like when fishing deeper water, I set up both of these lines to present different baits or to cover different depths in the water column.

For a trailing bottom line, it’s hard to beat a Carolina rig.  I look for egg sinkers that are more oval than round, so they pass through smaller places without snagging, but that’s my primary concession.  I have friends that fish trolling sinkers, banana weights and such for this, but I believe in keeping it simple.  Simple catches fish and you don’t lose much when one gets hung beyond retrieval.  If you don’t occasionally get hung and lose a few rigs, you aren’t fishing in the right places.

As well as a Carolina rig works for a trailing bottom line, I suggest you also check out the Fluke Tamer and Pop Rig from Sea Striker. These rigs were originally intended for flounder, but present two baits and also work well for redfish, trout, striper and more.

These rigs are similar in being double drop rigs having a plain Kahle style lower hook and a bucktail above an upper Kahle style hook. The biggest difference is the sinker is added on a snap above the lower hook on the Fluke Tamer and on a loop below the lower hook on the Pop Rig.  The Fluke Tamer is only available with a white bucktail, while the Pop Rig is available with white, chartreuse, lime green and chartreuse/white bucktails.

Fished close to the boat and close to straight up and down, these rigs present a bait behind a bucktail a few inches above the bottom and a bait working along the bottom.  They work with almost all minnows as live baits, plus the hooks can be switched and soft plastic artificial baits can be used.

My ideal trailing float line uses a bobber stopper setup so it can quickly and easily be adjusted for any depth.  Cigar or egg shaped floats work well, but I like to rig it with a popping cork for more versatility.  Any of these corks will work fine to set the depth on a trailing line – it’s their other characteristics that set them apart. 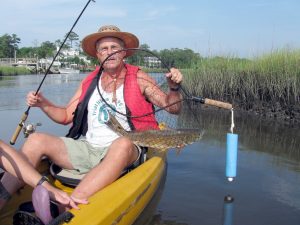 Wait, there’s more.  Adding a second bobber stopper just above the swivel allows moving it and the egg sinker up the line to create a short section for the cork that acts like the center wire used with many popping and clicking floats.  This allows the more subtle clicking for small areas or areas with minimal current and tipping the cork over to pop and click for a louder presentation and more attraction in larger areas or areas with stronger currents.

How many have heard of  float called an Alameda Rattler?  This is a hollow plastic float that has multiple rattles inside it.  The rattles are smaller in a smaller float and larger in a larger float, which allows changing the rattle frequency simply by changing the float.  The rattles sound surprisingly similar to schools of shrimp and attract fish well.

Trailing rigs can be tuned for the situation. Typically I set up a trailing float rig so it holds the bait a few inches above the bottom.  This works especially well with mud minnows as they struggle to get down to the bottom to hide and their struggles attract predators. Sometimes, when pinfish and other bait thieves are really thick, I shorten the leader for the trailing float bait to keep it 15-18 inches off the bottom and this often keeps it out of the view of the bait thieves so it isn’t molested by them and lasts longer.

I discovered another way to set up my trailing float bait sort of by accident on a trip to Louisiana several years back. A bunch of us had booked a mothership trip to stay out for several days while living on the mothership and using their small skiffs to fish.  The first night several members of the group got deeply into a poker game (matchsticks only, of course) and some adult beverages.  The next morning, a few of these guys, including my boat mate for that morning, decided to sleep in rather than fish early.

Luckily, I found a section of bank off a marsh island that was the perfect layout for me to drift with the light wind.  After a little exploring, I found a section of bottom with some rock and oyster rock, that was within casting distance of the bank. This bottom produced a few trout quickly, so I decided to drift it and cast to the bank for flounder and drum with a Cajun Thunder Cajun Sleigh Spinner Spoon.

The trout were on the bottom and there was just enough structure to occasionally grab my lure if I tried to drift the bottom, but it wasn’t bad.  I came up with the idea of using a Cajun Thunder Back Bay Thunder rattle cork and setting the depth so the Betts Perfect Sinker shrimp would only occasionally hit the bottom and when it did, it would mostly pull itself free, giving the shrimp a nice jump off the bottom.

I didn’t catch a flounder, but stayed busy almost all morning with drum and trout.  Many of the drum I caught were barely legal, so I released them and only kept the upper slot ones (the limit is 5 there).  That was pretty good, but I don’t believe a fisherman could have fished any better for the trout than my trailing line.

The limit on speckled trout is 25 and I had made a decision not to keep any trout I needed to measure to be sure it was legal. When I returned to the mothership for lunch, I had 3 drum, 22 speckled trout and 5 white trout.  All but 2 of the trout hit the trailing line while that rod was in a rod holder and I was casting to the shoreline.  Those two hit before I had enough line out to put the rod in the holder.  I believe you’ll agree that trailing line produced well.

Another great example of fish hitting the trailing line occurred while kayak fishing in a creek near Southport.  I was drifting along a drop-off about 25 feet from the bank and casting a mullet minnow under a popping cork to the bank when a huge flounder hit the 5 inch pearl and chartreuse jerkbait I was dragging along the bottom.  This flounder stopped my kayak on his strike and spun it around when I picked up that rod and began fighting it.  Unfortunately, like many good fish tales, he spit the hook about a foot beyond my net and I don’t know what he weighed.  I’ll say he felt 8-10 pounds through the rod and he looked pretty big too.

Fishing trailing lines while drifting will produce fish.  I consider it standard procedure while fishing alone.  Trailing lines can be fished along the bottom or suspended under a float – or both.  Give this a try with your favorite lures or live bait.  You won’t be disappointed.