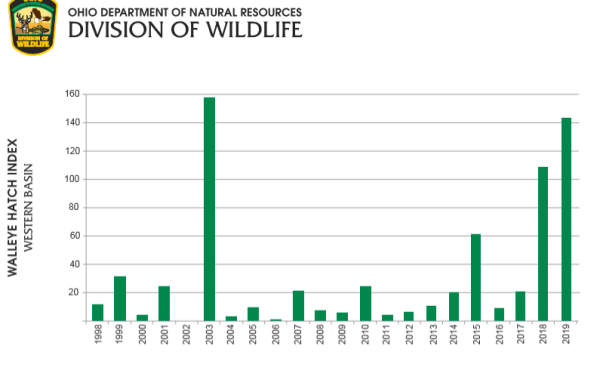 COLUMBUS, Ohio – Preliminary results from surveys in the western basin of Lake Erie indicate more great news for Ohio anglers, according to the Ohio Department of Natural Resources (ODNR) Division of Wildlife. For the second straight year, Ohio’s data points to an exceptional walleye hatch, the second-highest in the history of the survey, and the yellow perch hatch was also strong, well above its long-term average.

Each year in August, wildlife agencies from Ohio, Ontario, and Michigan sample the western basin of Lake Erie in search of young-of-the-year walleye and yellow perch. Biologists from the Division of Wildlife survey nearly 40 locations between Toledo and Huron. The data is compared with the results from previous years to gauge the success of the walleye and yellow perch hatches.

The Division of Wildlife’s 2019 August walleye hatch index was 143. This is the second-highest value on record for Ohio’s waters of the western basin and far above the 20-year index average of 27. This year’s outstanding hatch combined with the excellent 2015 and 2018 year-classes will ensure an abundance of young walleye to complement the older and larger fish that make up the current Lake Erie walleye population.

The August survey found the 2019 yellow perch hatch index to be very good at 467. This is above Ohio’s western basin 20-year index average of 317 and is the fifth year in the past seven that falls above the average. This above-average yellow perch hatch will help bolster the population following a strong 2018 hatch in the western basin. Additionally, catches of yearling yellow perch were nearly double the 20-year average and confirm the strength of last year’s class.

During the upcoming months, Ohio survey results will be combined with Ontario data to characterize the basin-wide catches of young-of-year walleye and yellow perch. This data allows biologists to calculate an initial projection of how many young fish will enter the fishable population two years later, which will be used in the process to determine jurisdictional quotas for the 2021 fishing season.

Central basin results for walleye and yellow perch will be available later in 2019.

Information on the Division of Wildlife’s Lake Erie research and management programs, fisheries resources, fishing reports, maps, and links to other Lake Erie web resources are available at wildohio.gov.

The mission of the Division of Wildlife is to conserve and improve fish and wildlife resources and their habitats for sustainable use and appreciation by all. Visit wildohio.gov to find out more.

ODNR ensures a balance between wise use and protection of our natural resources for the benefit of all. Visit the ODNR website at ohiodnr.gov.