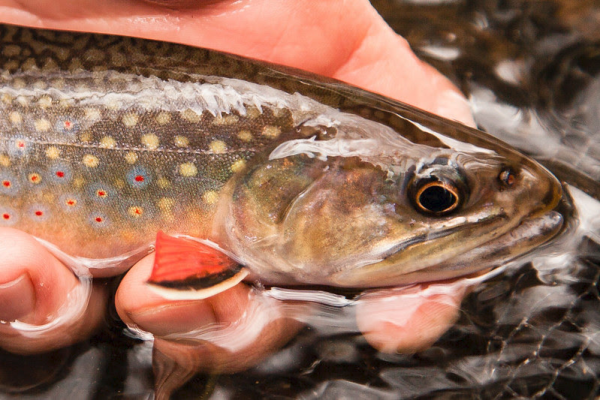 Temperatures are on the rise in the Chesapeake Bay watershed, and wildlife and plants throughout the region are already experiencing the impacts—mirroring what is happening across the rest of the country. For example, the timing of leaf growth and flower blooms has changed across the United States. The iconic cherry blossoms in Washington, D.C.’s tidal basin now experience peak bloom an average of five days earlier than in 1921.

Our atmosphere acts like a blanket surrounding the earth. When we burn fossil fuels for energy, we release carbon dioxide, which thickens the blanket. The additional heat that is trapped is causing global temperatures to rise and disrupting the climate.

How are temperatures changing across the Chesapeake?

The Chesapeake Bay Program tracks air and water temperature using data reaching back to 1901. These data show that temperatures in the Chesapeake region have been on the rise for years. While certain local conditions may vary, the warming trend across the region is clear.

According to a 2015 study by the University of Maryland Center for Environmental Science, warming water temperatures have been recorded in more than 92% of the Bay’s tidal waters. And a study by the U.S. Geological Survey found an average increase of 1.98 F in air temperatures and 2.52 F in nontidal freshwater stream temperatures in the Chesapeake Bay watershed from 1960 to 2010.

Unfortunately, the projected rate of warming for the region isn’t slowing down. Depending on how much we reduce our global emissions—from energy, transportation, food production and other sectors—projections indicate our air temperature will warm 4.5 F to 10 F in the watershed by the 2080s. Water temperatures would also increase.

Effects on wildlife and plants

These temperature increases have a variety of impacts across the region. For example, the U.S. Department of Agriculture has changed plant hardiness zones—geographic areas with particular climatic conditions that help growers choose which plants to choose for their area—throughout country, as we now see longer growing seasons and fewer days with frost on average than we did just 25 years ago.

Many North American birds, including the ducks, geese and other waterfowl that spend cold months in the Bay’s marshes and wetlands, have shifted their wintering grounds northward and inland. However, these birds may not always be able to find suitable habitat further north. A recent report from the Audubon Society found that the continuing trend of temperature increases associated with climate change will put two-thirds of North American bird species at risk of extinction.

Chesapeake wildlife will also be impacted by changing oxygen availability. Just like humans, all of the Chesapeake Bay’s living creatures need oxygen to survive. Though the biggest factor in low-oxygen zones in the Bay is nutrient pollution, temperature also plays a critical role in determining the amount of dissolved oxygen in Bay waters. The warmer the water, the less oxygen it can hold, so warmer temperatures could lead to larger dead zones in the Bay..

Fish species will also be impacted by rising temperatures, and in many cases, already are. One iconic freshwater species that is particularly vulnerable to temperature change is brook trout. These fish need cold, clear water to survive. As the temperature of the region’s streams has increased, scientists have documented the brook trout’s disappearance. In fact, high water temperature has been named the greatest disturbance to brook trout populations in Maryland and Virginia.

Other marine and estuarine species that need colder waters to thrive include striped bass, soft shell clams, winter flounder and the endangered Atlantic sturgeon. These species may be pushed out of the Chesapeake region as waters continue to warm.

However, a National Wildlife Federation report found that other species that typically live in the warmer waters south of here may expand their range into the Chesapeake. This could include several species of shrimp, black drum, grouper and southern flounder.

While these species can support new fisheries, other less-welcome species are expected to be attracted to the Chesapeake’s warmer waters as well. Warming air and water temperatures could favor the introduction of new, potentially invasive species, which can lead to additional competition for food and habitat. For example, the wooly adelgid, an invasive insect that has been destroying hemlock trees in the region, could spread fartheras warmer winter temperatures lead to reduced mortality from the cold.

However, not all species will experience negative impacts. Blue crabs may thrive under these warmer conditions, as a recent study found that their overwintering time will decrease and their survival rate during the winter will increase by at least 20%. Unfortunately, blue crab populations may be indirectly affected due to the expected continuing declines of eelgrass cover, a type of underwater grass, which provides important habitat for the protection of juveniles. Crabs that are more active year-round will also require more food, and the loss of the dormant overwintering period may lead to changes in the crabbing season.

Even for species that are not pushed out of the area by the warming water temperatures, there may be negative impacts. A 2008 report to the Maryland Commission on Climate Change found that warmer waters can cause aquatic species to grow and reach maturity faster, which often leads to smaller adults and reduced reproductive output.

In addition, research has shown that the temperature at which the region’s fish begin to spawn or migrate is occurring three weeks earlier than it did in 1960. This timing shift has the potential to cause a mismatch between when these fish are reproducing and when their prey is available.

Some of the species that serve as prey for many fish are also shifting with climate change. A 2017 study found that 18 of 30 common shallow bottom-dwelling invertebrate species—creatures like bristle worms—shifted their center of abundance northward between 1990 and 2010 in the Atlantic region, coinciding with a significant increase in average water temperature. This could negatively impact the species that rely on the bottom-dwellers for food, including culturally and economically important species like blue crabs, striped bass, spot, croaker and white perch.

The Chesapeake Bay Program’s Scientific and Technical Advisory Committee reports that climate change will cause pathogens to become more widespread, including two that have severe impacts on oyster populations: MSX and Dermo. The prevalence of Dermo, in particular, is strongly tied to temperature.

Overcoming the effects of Dermo and MSX poses an ongoing challenge to oyster restoration. Already, it is estimated that by age three, 80% or more of a single oyster year class in a high disease area (like the Virginia portion of the Bay) will die due to disease. A year class refers to all the oysters that were born during one annual spawning period.

What can we do?

One of the best ways to address these health problems is to reduce our greenhouse gas emissions. By reducing our use of fossil fuels, we produce less carbon dioxide and limit the amount of heat that is trapped by our atmosphere. The degree to which we reduce our emissions will be the biggest factor in determining future temperatures in the region. The impacts from an increase of 10 F by the 2080s will be much more severe than those from an increase of 4.5 F.

Driving or flying less, reducing energy use in your home, adopting a climate-friendly diet and switching to renewable energy are all great ways to reduce your carbon footprint. Check out our How To’s and Tips page for even more ideas.

However, because the carbon dioxide we have already emitted can stay in the atmosphere for a long time, a certain amount of increased warming is inevitable. There are certain actions we can take to try to adapt to this temperature increase.

One key strategy is to ensure that our efforts to restore underwater grasses prioritize diversity of species. We can’t rely solely on species like eelgrass that are highly susceptible to heat events. Having a range of species that can withstand different conditions will help underwater grass populations remain more stable.

Efforts to protect oysters from disease are also underway. Research from the Virginia Institute of Marine Science has found that oysters subject to high disease pressure are developing disease resistance, and efforts are underway to breed greater disease resistance in native oyster strains.