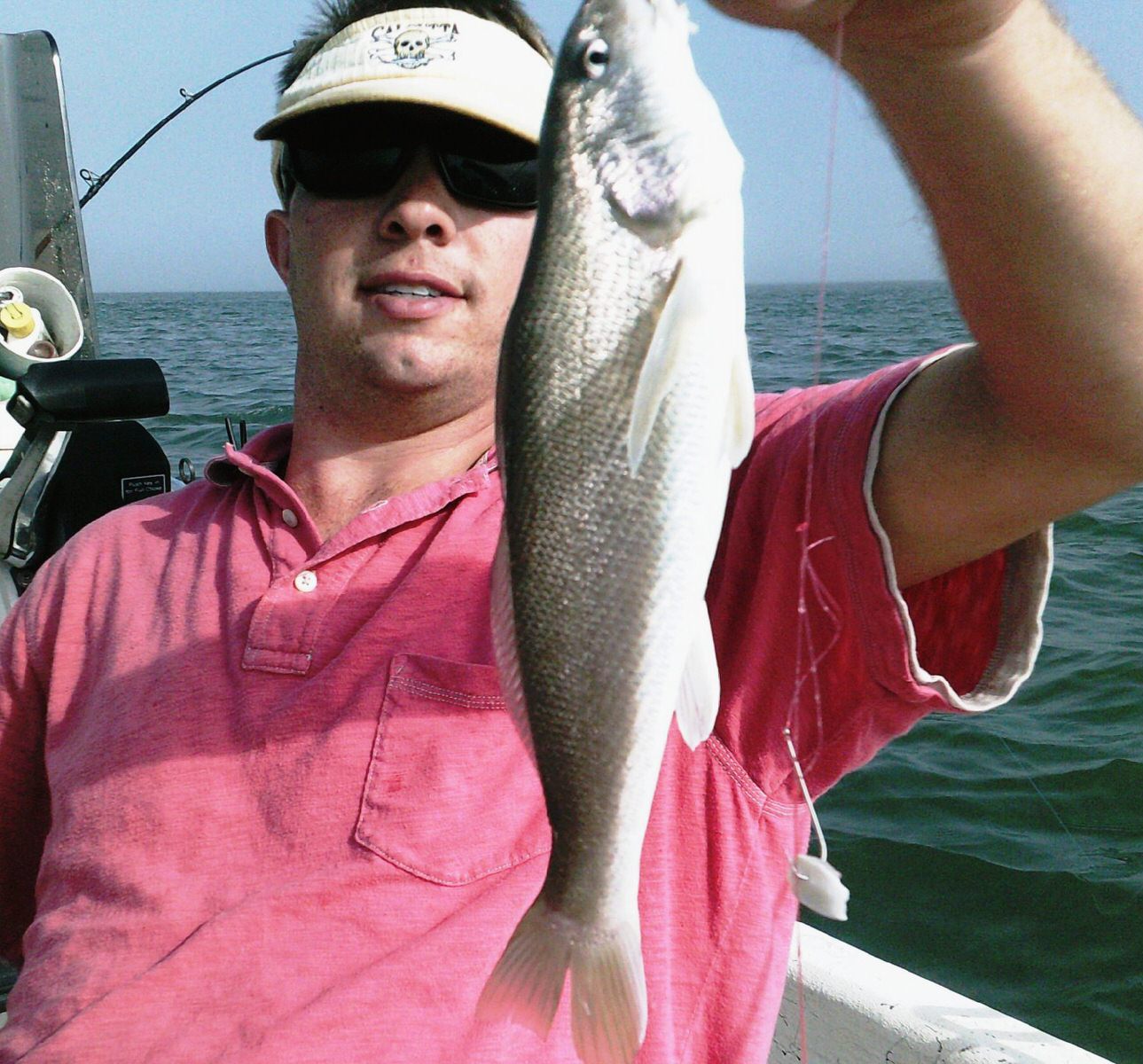 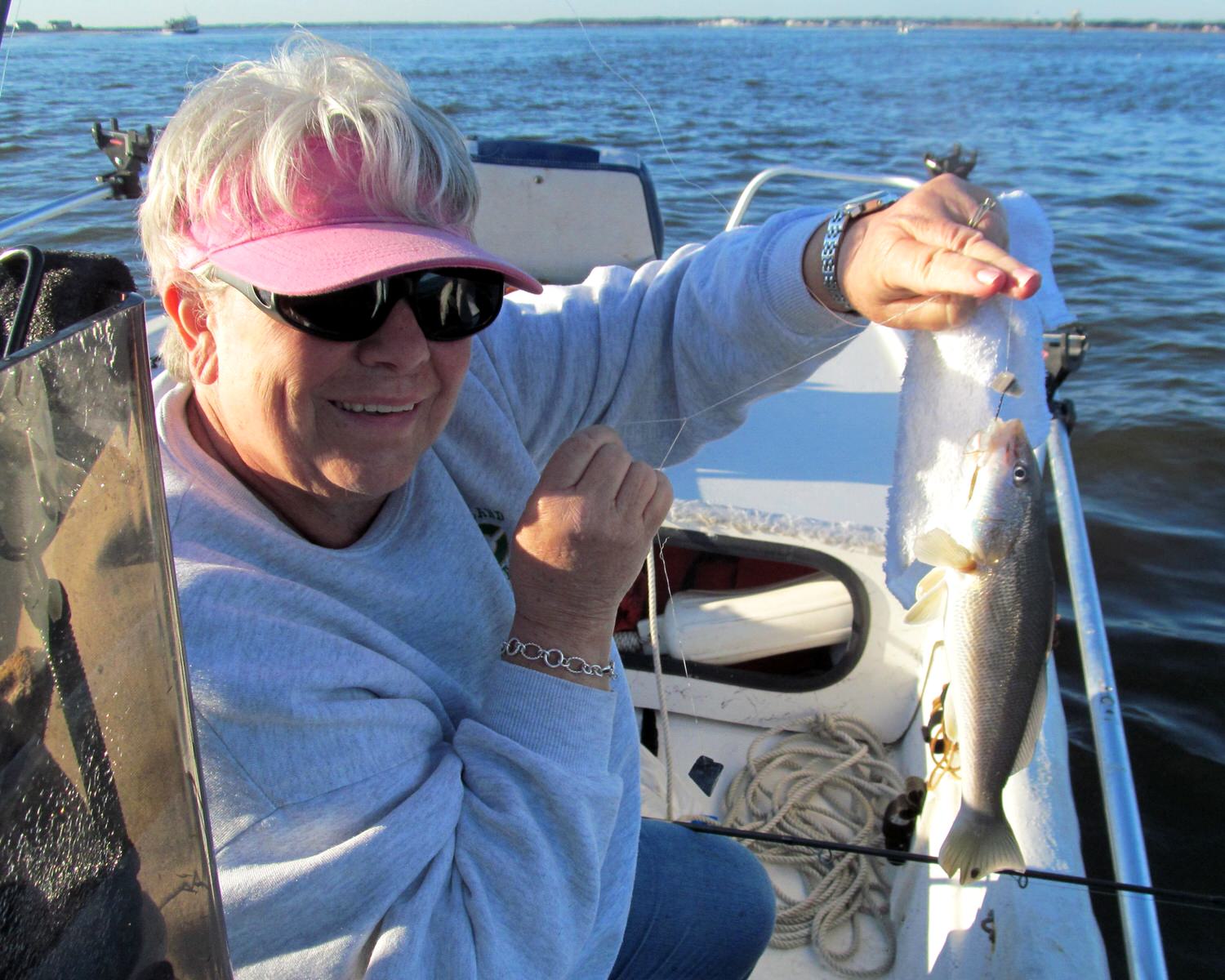 When many fishermen hear the word kingfish, they think of king mackerel.  That’s a natural thought progression, with king mackerel being sleek, fast, powerful and growing to nearly 100 pounds.  They definitely are kingly fish, with all the attributes to put them at the top level of the ocean’s hierarchy, even though those largest kings are actually queens.

However, kingfish is only a nickname for king mackerel. The real kingfish are much smaller and only grow to several pounds.  However, their excellent flavor ranks them at the top of many fish eater’s preferred fish list and they are king of the fish preferred for the dinner table.  They are the favorite panfish of a great majority of the senior population along the Atlantic and Gulf Coasts, even though they call them by different names.

There are three different species of kingfish. They have the same basic body shape, but slightly different coloration and one has a longer pronounced spine on its first dorsal fin.  The differences are enough to tell them apart pretty easily, but currently there isn’t a need.  If there are limits or minimum sizes, they are for the whole kingfish family.

Kingfish are better known by their nicknames.  Sea mullet, Virginia mullet, and whiting are all kingfish but have different nicknames in different locations.

The northern kingfish (Menticirrhus saxatilis) is the most impressive looking of the three species.  It is gray, with black stripes running vertically and has a dark stripe running from the pectoral fin back to the tail.  The northern kingfish also has a long spine, which trails back, on its first dorsal fin.  The northern kingfish ranges from Maine to South Florida, but are considered more abundant north of Cape Hatteras.  They are caught regularly to Beaufort Inlet, N.C. and occasionally to the south.

The southern kingfish (Menticirrhus americanus) is gray with some dusky vertical stripes, rather similar to the northern kingfish but lighter in color.  This kingfish does not have the extended dorsal fin or longitudinal stripe between its pectoral fin and tail.  They are the most common of the kingfish family and range from Cape Cod through central and South America to Argentina.

The gulf kingfish (Menticirrhus littoralis) is darker gray on its upper back and lightens to silver on its sides and belly. It has no striping.  Gulf kingfish are the largest of the kingfish family and grow to over three pounds.  The gulf kingfish ranges from Virginia, around the Gulf of Mexico, to Brazil.  They are mainly caught south of Cape Hatteras. 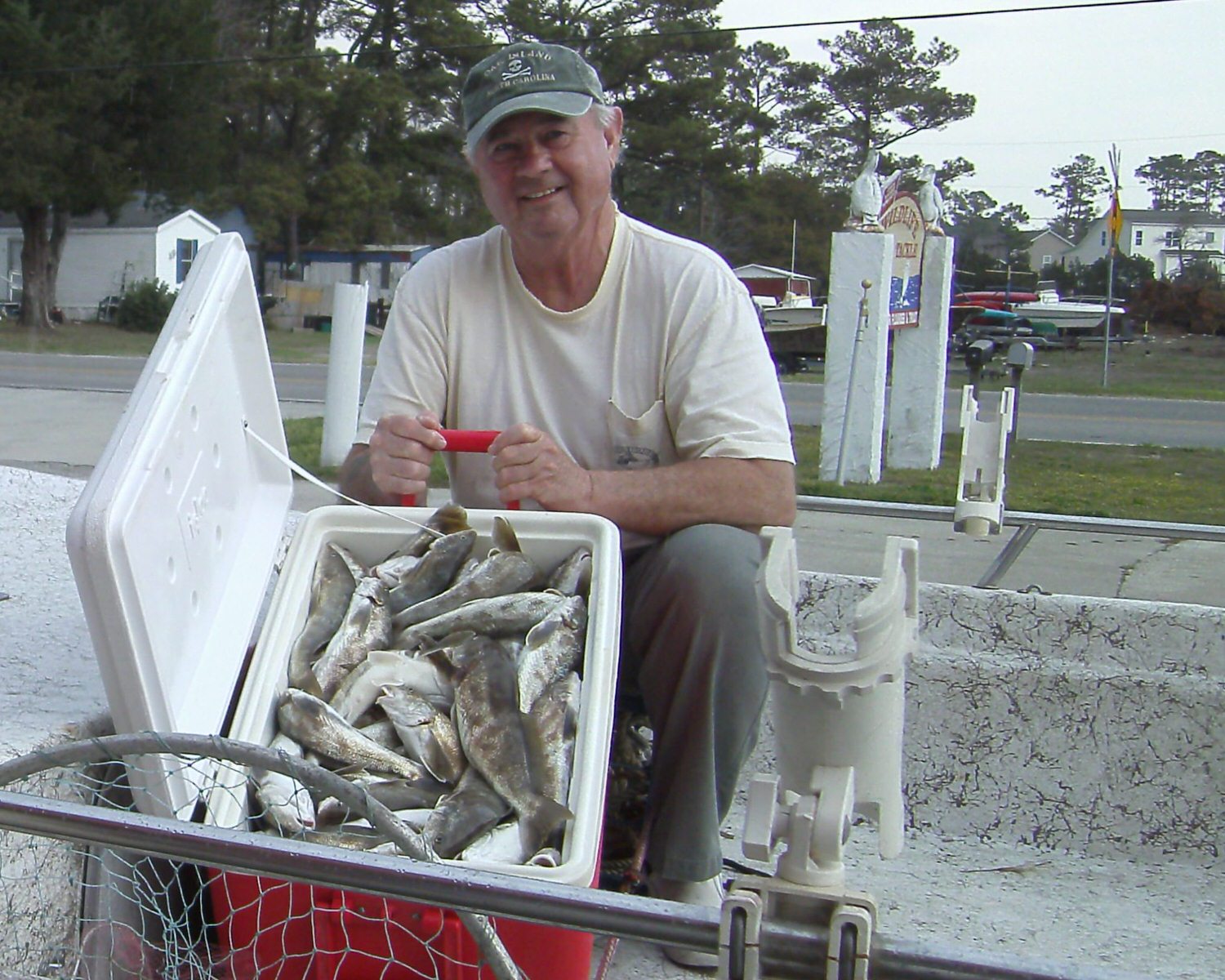 Depending on the location along their migration route, kingfish may be around most of the winter, or they may reach the areas sometime between March and May.  Here on the North Carolina Coast, they may arrive during March, but certainly by mid-April.  North Carolina kingfish are Virginia mullet along the Outer Banks, sea mullet around Cape Lookout and the Central Coast and become whiting around Cape Fear and farther south.  They typically begin to arrive in the ocean around mid-March and move inside the inlets a couple of weeks later.  About the same time they show in the inlets, they are also putting in a welcome appearance for pier fishermen.

In the Morehead City/Cape Lookout area, some fishermen, particularly senior anglers, eagerly await the return of sea mullet each spring.  Sea mullet are their favorite panfish and they’re ready for some fresh ones.  The meat is as sweet as speckled trout but firm, like a drum or croaker.  That’s fitting as they are members of the croaker family and males will make noise when caught.

Sea mullet aren’t large fish.  Most weigh less than a pound and a catch weighing 1.5 pounds or more is eligible for an outstanding catch citation.

Sea mullet range from being 40 feet deep in the ocean and inlet channels to only several feet deep in the surf and internal waters. Being widespread adds to their popularity by making them accessible to a variety of fishermen.  They are ground feeders, using their superior sense of smell to help locate food and inferior mouths (mouth located on the bottom of the head, rather than in the middle) to grub tasty morsels they find by searching across the bottom.  Their foods include small crabs, minnows, shrimp and pieces of any of these left behind by other predators.

Pete Allred, who used to run Pete’s Tackle and Fly Shop in Morehead City, was a master at catching sea mullet. Seriously, he had them figured out. Several decades ago he spent several late winter afternoons prepping several of us to catch plenty of sea mullet when they arrived a few weeks later.  His specifics were for in the Dead Tree Hole, Sea Mullet Hole and Ship Channel in the ocean, plus the Morehead City Turning Basin and in the hook at Cape Lookout. 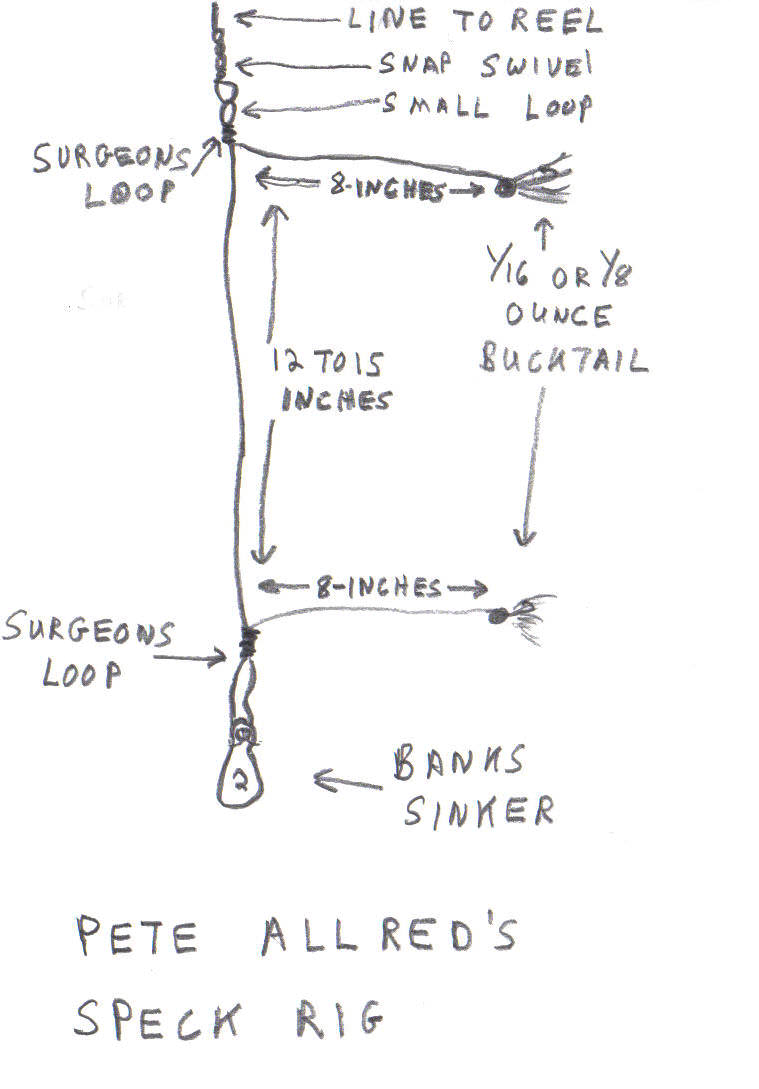 Allred’s first rule for catching sea mullets is to always have the freshest bait possible.  He preferred pieces of white or green tail shrimp but occasionally baited with sand fleas (mole crabs) when fishing in the surf or just off the beach.

Allred said having fresh shrimp for the spring sea mullet run wasn’t as difficult as many folks made it out to be, but required some advance planning.  He said to gather fresh shrimp in the fall, when they are plentiful, and freeze them in water, in small amounts.  The water covers the shrimp and keeps them from becoming freezer burned from continual exposure to freezing air.  By freezing them in small amounts, you can just take out what you need for that fishing trip and not have enough left you are tempted to refreeze them.

Allred also offered a few guidelines to finding fresh shrimp to freeze.  Fresh shrimp will always be firm, not hard like frozen, but not soft to touch.  Fresh shrimp do not have any bruises or discolorations, even around the edges of the shell.  The final telltale for fresh shrimp is that it will not have any odor. If shrimp has a “fishy” smell or a slight ammonia smell, it isn’t fresh.

Allred said with the Morehead City Turning Basin being a No Wake zone, it is safe for most boats to fish there.  There is a lot of boat traffic, but it is at no wake speeds. He said one of his favorite places to catch sea mullet is along the edges of the Beaufort Inlet Ship Channel from just outside the inlet to the docks at the N.C. State Port in Morehead City. Allred said this area is dredged regularly to keep it deep enough for large ships and the edges of the channel and Turning Basin are some of the softer places.  Sea mullet use their sense of smell to locate food and will grub in the bottom for it, so this is a good place for them to be feeding.

Allred said sea mullet usually showed first in the ocean along the edges of the Beaufort Inlet Ship Channel and at the Dead Tree Hole and Sea Mullet Hole off Shackleford Banks.  They also move into the hook at Cape Lookout and pier fishermen see good runs.  Surf fishermen catch them at times too.

Allred suggested two rigs for sea mullet.  The double drop skirt rig made by Sea Striker should be available in most tackle shops.  This rig uses two hooks that are dressed with small squid-like skirts just above each hook.  There is a swivel at the top to tie it to the fishing line coming off the reel and a connecting link at the bottom allows attaching and changing the sinker. Allred recommended Eagle Claw 066 series hooks in size 2.  These are extra long shank hooks that are offset at the bend.

The other rig Allred suggested required a little customization.  It begins with the synthetic hair bucktails from 1/16 and 1/8 ounce Betts Speck Rigs. Yellow and white are the most popular colors, but orange, red and chartreuse work better some days.

The measurements and instructions Allred gave were, to begin with, a 6-foot long piece of 20-pound mono.  Tie a small loop at the top and trim the tag end to 8 inches. Drop down the mainline and make a larger loop 12-15 inches below the knot of the top loop.  Trim this tag end to 8 inches also.  The small loop is to attach the rig to a snap swivel at the end of the line from the reel and the large loop is to attach the lightest sinker that carries the rig straight to the bottom.  Loop the line through the sinker’s eye and over it to allow quickly and easily changing the sinker.  Tie the bucktails to the tag ends out from each loop and tip them with a small piece of shrimp.

Allred said to position the boat along the edge of the channel and drift with the tide.  Either rig is dropped straight to the bottom and occasionally jigged vertically about a foot.  Allred said jigging the rig helps get the attention of sea mullet and when they swim closer to investigate it, they smell the bait and bite.

Currently, there is not a limit or minimum size for sea mullet in N.C.  However, with their growing popularity, they have shown up on several state and federal fishery manager’s radar and discussions have begun to regulate fishing for them.  It’s probably a good idea as more fishermen discover just how good they taste, the fishing effort will certainly increase.  Many Down East N.C. old timers say sea mullet are the best tasting panfish in the water and a growing number of dedicated sea mullet fishermen is a pretty serious indication more fishermen are beginning to agree.

Whatever name you choose to use, sea mullet, Va. mullet, whiting or kingfish, they are all lots of fun to catch and excellent table fare.  They are even more accommodating by being one of the first fish to arrive each spring and the last to leave each fall.  These are some good tips from a legendary Morehead City fisherman and tackle shop owner. Give sea mullet fishing a try and be sure to take some home for dinner. 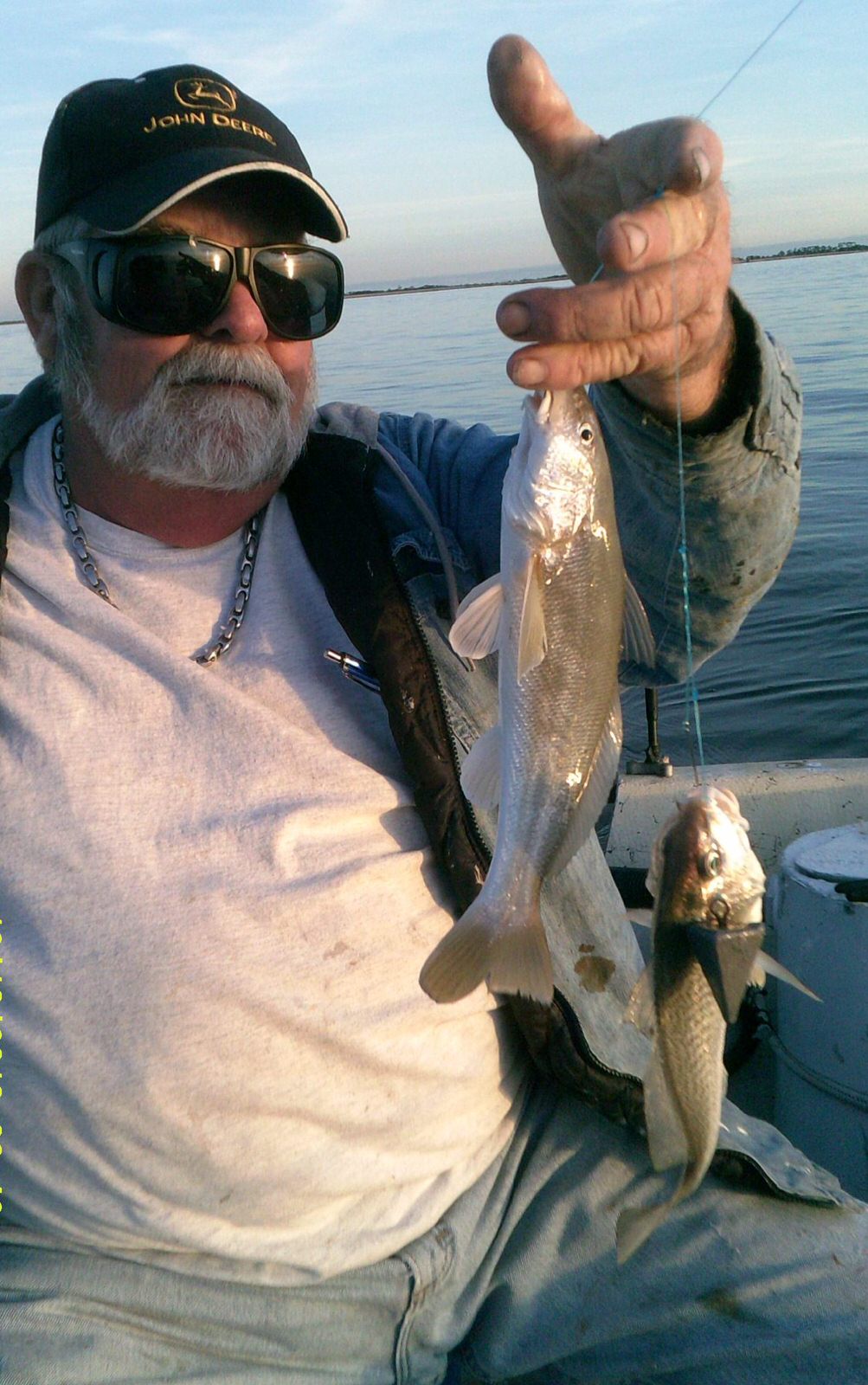