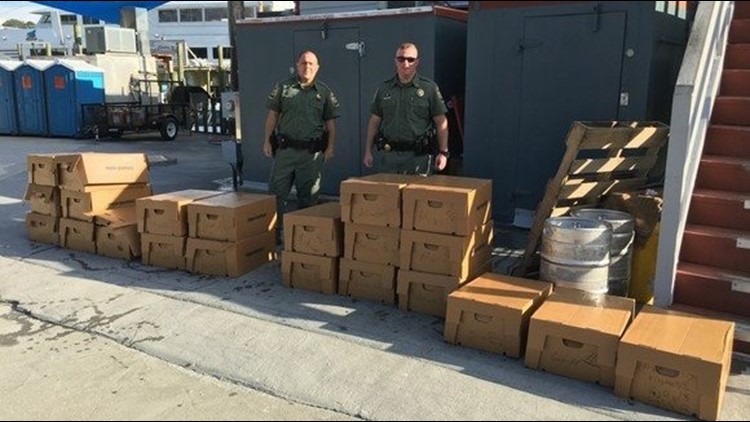 Officers asked both men on board, neither whom were the owner of the boat, to produce a federal snapper/grouper permit, coastal migratory pelagics permit and others, but they were unable to do so. One man told officers that he believed there was an estimated 1,800 to 2,000 pounds of fish on board.

Officers determined approximately 25 percent of the fish had already been unloaded and iced for sale and about 240 pounds had been delivered to a local restaurant — where staff took possession of the illegal catch unknowingly.

Once officers seized the fish, they advised the men that because the amount seized was so large, they would attempt to sell them to a wholesale buyer instead of holding them until after the trial, a common practice in cases involving amounts of fish this large. After several failed attempts to sell the seized fish at fair market value to other wholesalers, the fish were eventually sold to the owner of the vessel, who possessed a wholesale dealers license and Horry County business license.

The owner of the restaurant was also able to buy the fish that were delivered to it from the SCDNR at fair market value instead of seizing it. The money paid to the SCDNR will be held until after the trial and be forfeited to the agency if the men are found guilty.

While officers were doing a follow-up inspection aboard the vessel, they discovered out-of-season cobia that was hidden with intent, as well as yellow snapper.

It was determined there was approximately 1,500 pounds of fish seized, including the fish delivered to the restaurant.