Home Saltwater Fishing Inshore Getting Started: Buying a Redfish Boat Part 4 of 4. Why I... 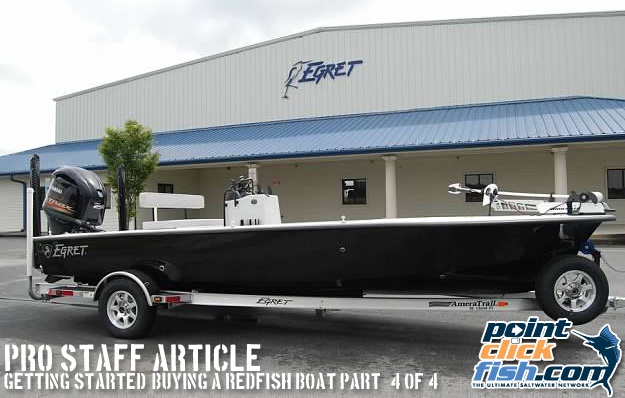 When Team Padrick and Smith, “The Redfish Guys”, had the idea of beginning The Getting Started Series of articles, our goal was to help the upstart inshore angler save some time and money by giving advice on tackle, gear, fishing techniques, etc. However, I’m going to do something a little different in these series of articles, because I recently sold my 189 Back Country flats boat and need a replacement.  Consequently, I had the idea of  “what if I asked a group of accomplished anglers that fish the same area a simple question:   Why did you purchase your boat?”  By picking a group from the same general area, I eliminated environmental variables such as geography, climate, and tidal fluctuations.  Subsequently, I picked some of the best captains Morehead City, North Carolina has to offer:  Gordon Churchill, Noah Lynk, and Team B&G’s Daniel Griffee and Matt Lamb.  Like “The Super Friends” of the 1970’s animated TV series, they all have their own special powers but share a commonality;  they catch a lot of reds!  Our heroes know the flats, marshes, and creeks of Morehead City like their own proverbial backyards. However, they choose to fish out of different boat designs.  Why?  Hopefully,  their explanations can shed some light for all of us on the benefits of fishing out of a bay boat, flats boat, traditional skiff, and a technical poling skiff.

Why I run an Egret Flats Boat?
By Captain Matt Lamb

Speed: The main reason I run an Egret is for tournament fishing.  I purchased a boat that runs in the high 60’s, so if I want to make a long run I can.  When I say long run, I mean 60 or more miles one way. I’ve made the run from Surf City back to Morehead City more than once, fishing the IFA Redfish Tour.  When you’re going to make runs like that, you have to have speed.

The last two years in the IFA Redfish Tour Championship in Chalmette Louisiana, I chose to make a long run back to the redfish I wanted to fish during the tournament.  By doing this, it allowed us to finish in the “Top 10” two years in a row against some of the best redfish anglers in the nation.

Draft: Another big factor to a flats boat for me is draft. If you’re going red fishing, you have to think about draft to catch fish.  I wanted a boat that is going to float in 9 to 10 inches of water, which the Egret does.  What I’ve seen over the years fishing shallow water is that, in most cases, your trolling motor will start digging in about 11 inches of water.  You need an extra inch or two to be able to push your way out of trouble if you’re hitting bottom with your trolling motor, and the Egret 2011 does it perfectly.

This past year in Louisiana, I was able to get into small ponds and sight fish until my trolling motor started digging.  Then I was able to just float the boat continuing fishing or push out with the push pole without getting stuck.  Yes, you’re going to hear anglers all across the East Coast say that you need a boat that you can get in super skinny water to catch fish, but that isn’t the case around Morehead City. You need to fish in shallow water, but once you get to shallow, all you’ll do is spook fish that you might have had a chance of catching when the water gets a little higher.  Most of the fishing done around Morehead City is done at a depth of 12 inches.

I’ve got angler friends in SC, GA, and FL where getting super shallow plays a big role in catching fish. When you fish in SC, you start getting into bigger tide swings.  A smaller boat with less draft comes into play as the tide can fall 6 to 8 ft at times, where you can be left high and dry. In and around Morehead City, we only have a 3 to 4 ft tide swing. Sometimes, if we’ve had a hard northeast wind for a few days, you’ll never see the water come out of the grass.

When fishing shallow water, a power pole is a big key to success.  If you get on a school of feeding redfish, you can stop the boat, ease in, and not spook them with a trolling motor.  So, if you’re looking for a shallow water boat, go ahead and invest in a power pole. It will pay for itself time after time by allowing you to catch more fish.

The only thing I’ve seen that works just as well is a “Stick-It Anchor Pin”.  It’s just a rod that you push down in the mud to hold you in place without having to drop an anchor and spook the fish.  We sell the Stick–It Anchor Pins at Chaisn Tails Outdoors, which is way less expensive if you don’t want to spend the money on a power-pole. You can pick one up for less than a $100.

Ruff Water Capability:  Egret has one of the best hulls or the best hull for rough water. I’ve had my boat in a 3 to 5 ft chop before running 40 without any water spray over the side, not to mention my dad sitting beside me without even having to hold on.  Feel free to come by the shop, Chasin Tails Outdoors and ask Ray, my dad, all about it.  We did run a Lake & Bay Boca, a very fast boat, and every tournament he had to hold on for dear life during each event.

Since we got into the Egret, he doesn’t know how to act as he can just sit and relax, not even having to hold on when we’re running in the mid 60’s.  There is no boat on the market that has the look of an Egret. It’s very hard to find a flats boat that floats shallow and won’t get you wet in chop.  I can guarantee you that it will do so. I had to see it for myself to believe it, and the rest is history.  That is only one of their best selling points on an Egret as you can fish supper shallow, run shallow, and then go to the near shore reefs better than most any bay boat on the market.

Shallow Water Running: You can jack the jack plate all the way up, and if the boat is floating, it will take off without any prop blowout. The only other boats that I know of that will do this are Texas-style boats, which have tunnels made into the hull of the boat.

Morehead City is nothing compared with areas like South Carolina, Georgia, and Louisiana.  I have anglers all the time come by the shop and ask how to go down to the Louisiana marsh and get around without any markers of any kind throughout the marsh.  My answer is, “go and hope you don’t tear your lower unit off, and if you start throwing up mud, give it more power and don’t stop.” Just remember that when shallow water running you’re going to get stuck, and sometimes find yourself waiting for the tide to come in.  It’s like this if you’ve never got stuck shallow fishing, you’re not fishing shallow enough.

Really, there’s a lot of different makes of boats that will work fine around Morehead City from skiffs, bay boats, tunnel hulls and flats boats for inshore fishing.  I’d say that the big key in selecting a boat is that you need to weigh out what works best for you.

Egret Boats just came out with a new boat model that is built off the same hull as the high-end boats but at a low-end cost. From what I’ve seen so far, it’s like no other boat on the market, but that’s my opinion.  What Egret did was make a flats boat / bay boat hull with a skiff finish inside, which cuts way down on the cost. It makes a great family boat, sand bar boat, and fishing boat all in one.

I’ve been in several inshore boats, and I don’t think there is another boat on the market that rides as good as an Egret.  They’re made locally in Washington N.C.  Look them up at www.egretboats.com or on their Facebook Page.  Ask for Frank, and tell Captain Matt Lamb that Chasin Tails Outdoors Bait & Tackle sent you.

Thank you, Captain Matt Lamb for sharing your years of competitive redfishing experience.  Matt and his dad, Mr. Ray, have fished tournaments from North Carolina to Louisiana.  When they have time to share their opinions, I highly suggest that we listen. Matt owns and operates the best inshore tackle shop around, Chaisin Tails Outdoors Bait & Tackle. His shop attracts the best inshore fishermen in NC.  Consequently, it is a great place to learn the best places to fish, hot lure, buy live bait, and what species are biting around the Morehead City, Atlantic Beach area.

A special thank you goes out to “The Super Friends” who took the time out of their busy schedules to share their true special powers:  knowledge, experience, humility, and a willingness to share.  As always, thanks to the people who keep us on the water: Strike Pro, Powell Rods, Deep Creek Lure, Capt. Gary’s Marine Products, Yeti Coolers, No Slack Tackle, PointClickFish.com, and Numa Optics.  Please take a moment to visit Team Patrick and Smith’s website www.TheRedfishGuys.com or on Facebook keyword: The Redfish Guys 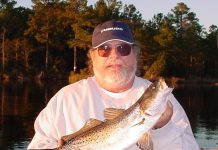 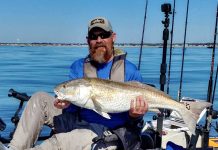