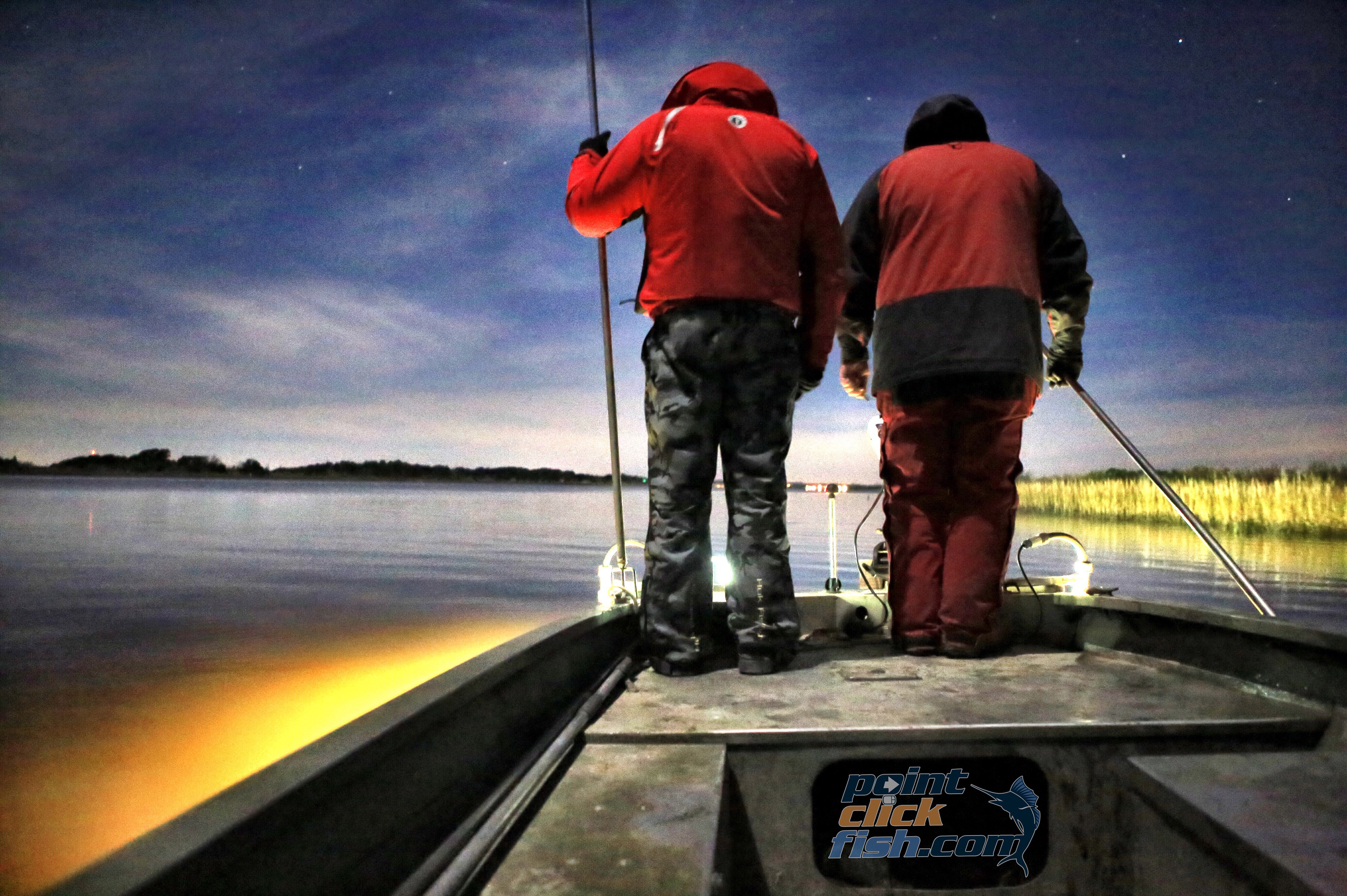 Sticking Flatfish With the Breadman 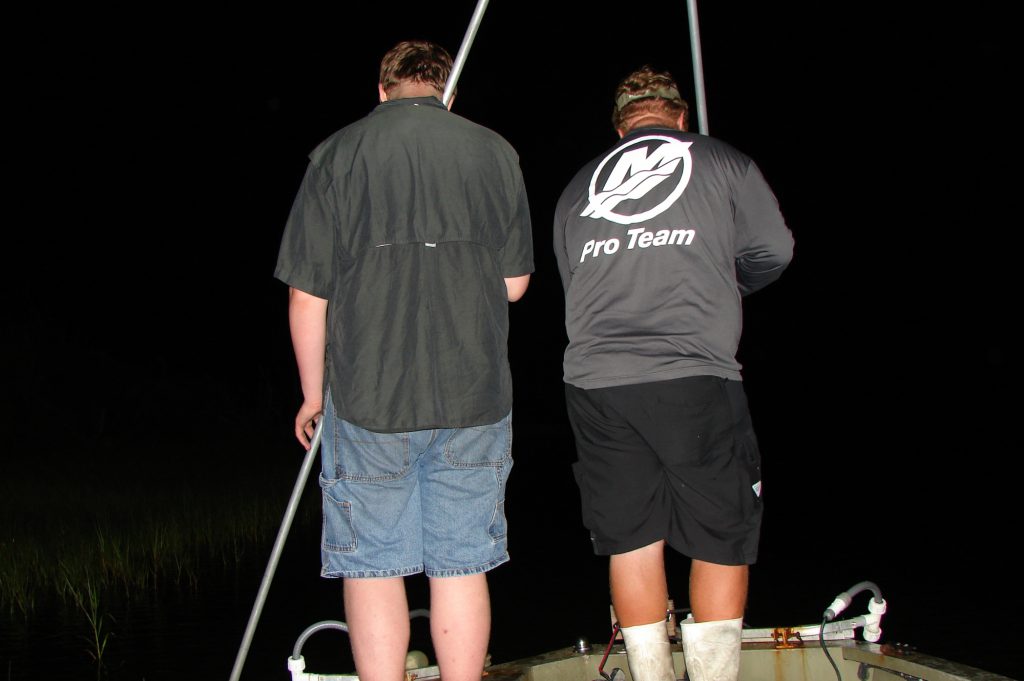 Capt. Allen Jernigan of Breadman Ventures in Sneads Ferry is one of a few guides along the N.C. Coast that offer charters for gigging flounder.  He has been successful at it for many years, so when he had a cancellation and asked if I wanted to go with him and his son, Garritt, that night, I didn’t have to ponder very long before answering yes.

Some folks tend to talk badly about gigging, but I found the night on the water to be educational, entertaining and a way to put a limit of flounder in my freezer.  Yes, the recreational limit applies to recreational flounder gigging too and each person is allowed 6 flounder with a minimum size of 15 inches.

Early on, I asked Capt. Jernigan about determining the size of a flounder in the water.  He said he had been doing it long enough he was usually accurate to within about a quarter inch and that if a flounder was really close to being barely legal, he passed it up to be sure he didn’t gig an undersized fish.  Capt. Jernigan said that flounder laying on the bottom at night aren’t usually very spooky and it is possible to stop and measure them as long as you don’t touch them doing it. 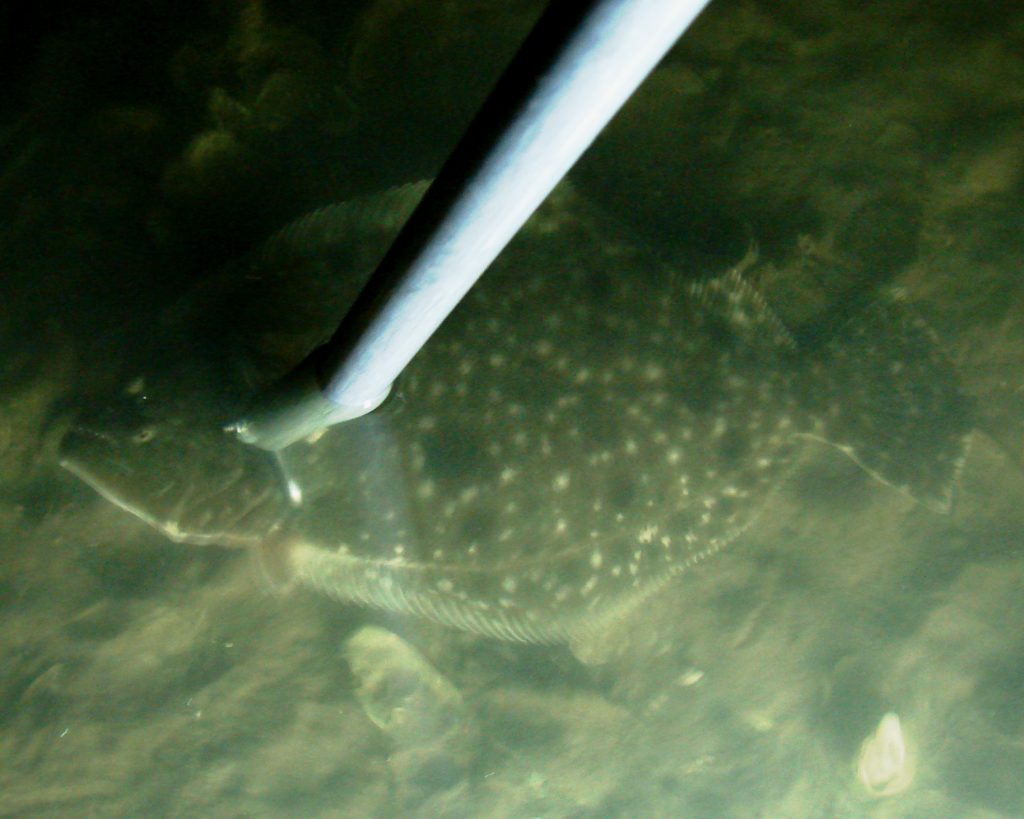 “I figured you were going to ask about undersize fish,” Capt.  Jernigan said. “I don’t allow gigging any fish whose size might be questionable. If you don’t gig it, it will never need to be released for being undersize. I would rather pass up a barely legal flounder than take a chance on gigging one that is undersize.”

“Gigs are the most selective gear you can use for fishing for flounder,” Capt. Jernigan said. “A gig can’t do anything by itself. Even if it falls overboard, it will just lie there until it’s found or covered with sand. If someone doesn’t hold, aim and push a gig forward, it can’t stick a fish. Any issue with gigging isn’t with the gig, but with the person using it.

Capt. Jernigan also cautioned that flounder will shrink in length after being on ice.  He said this could be as much as a quarter inch and this is another reason he only gigs flounder that are easily determined to be longer than the minimum size.

For this trip, I met Capt. Jernigan and Garritt at a Sneads Ferry ramp about 10:00 P.M. on July 21.  The moon had been full a couple of nights earlier, but hadn’t lost any of its brilliance.  Several commercial giggers who had left the ramp a little earlier expressed concerns the bright moon might negatively affect gigging, but Capt. Jernigan was optimistic.  The night was definitely bright and trees around the ramp were casting shadows in the moonlight.

“Since you’re with us and brought your camera along, we’re going to work an area tonight that should have some larger flounder than where I’ve been going,” Capt. Jernigan said.  “It doesn’t have the numbers and we’ll have to work a little harder, but hopefully it will be worth it and we’ll see some doormats.  There are more flounder at another place I’ve been going, but most of them are barely legal to about 17 inches.”

After a short ride through the darkness, Capt. Jernigan turned into a small bay, shut off his outboard and lowered his trolling motor.  He said we had arrived a little before the tide changed and the water was a little murky.  We worked through that bay for a little while and only saw a few shorts to maybe legal flounder before Capt. Jernigan said we should leave and wait for the water to settle out and come back later. 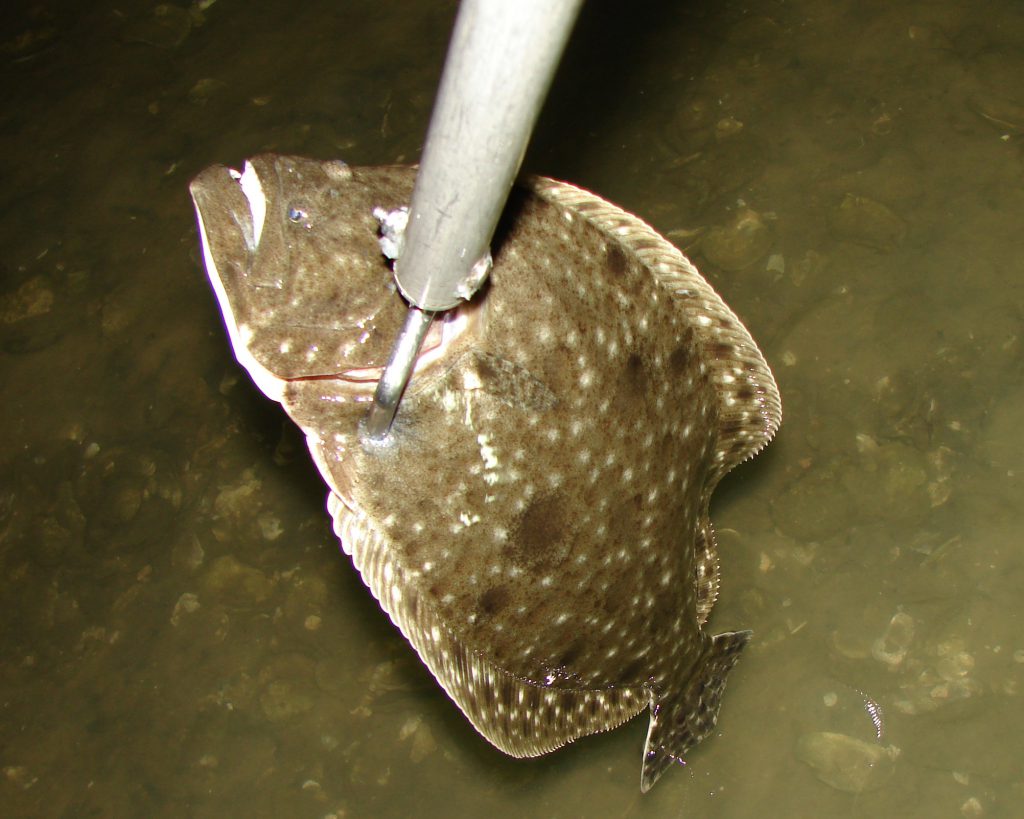 Now knowing the exact stage of the tide, Capt. Jernigan ran a few minutes to a bay where the water was much clearer.  He said it was surprising there could be this much difference in such a short distance, but the water at this spot was significantly cleaner.

I don’t know if it was the cleaner water or there were more flounder at this spot, but we began seeing them almost immediately.  Unfortunately most were obviously short or right at legal and Capt. Jernigan wasn’t going to gaff them to see.

In a few minutes, a big shadow came into view just at the edge of the light’s glow.  As Capt. Jernigan turned toward it, the shadow came alive and bolted away, leaving a mud plume.

“Darn, that was a nice one,” Jernigan said.  “It was probably 5 to 6 pounds.  It had just come in and wasn’t settled yet or it wouldn’t have spooked and run like that.  I hope we see it again later.”

Now the tide was falling and the water was clearing everywhere.  We were seeing a fair number of flounder, but most were small.  In one corner of a small bay, there was an area that must have had 50 to 60 flounder on a sand bar.  However, they were all too small to gig.  Capt. Jernigan gave 2 or 3 a second look, but decided they were too close to minimum size to stick.

There is something special about being on the water at night.  Sometimes it’s spooky, but this night had bright enough moonlight to see more than just in the circle of gigging lights.  There were mullet minnows and shrimp everywhere and we joked about where they would be if we came back in the morning with a cast net.  Skates and rays prowled the shallows and left mud trails when they spooked and ran.

Other fish barely reacted to the lights.  I was amazed at how relaxed several overslot red drum were as they cruised through the lights and down the side of the boat.  I could have reached out and touched several.  We also saw drum from small 15 to 17 inch pups to large fat girls tournament anglers would drool over.  Several trout, sheepshead, black drum and more came and went without alarm.

We didn’t see an alligator this night, but Capt. Jernigan said that is a common occurrence.  He said seeing an alligator is unnerving, yet exciting for people who have never seen one and often after seeing the first, they begin looking hard to see another. 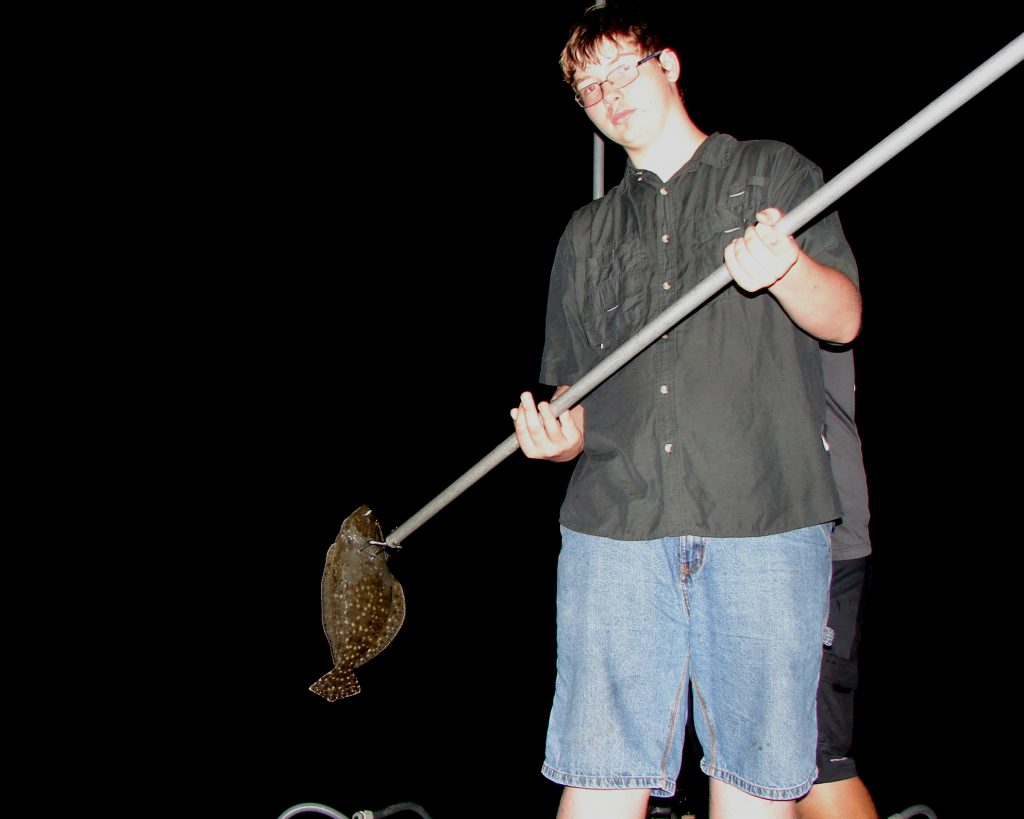 At some point we paused a few minutes and I asked Capt. Jernigan about his equipment.  It was obvious some was standard purchase and some was custom made.

Capt. Jernigan said that since flounder gigging is done at night, having the best lights possible is the primary key to gigging success.  He said the progression of lights has come a long way from when flounder giggers carried a lantern they held just above the water. The light was poor, the lantern bulbs were fragile, and seeing the flounder required being able to look through the glare of the lights off the water’s surface.

The first big step was to enclose 12 volt light bulbs in waterproof containers.  Now the lights could be lowered at least partially into the water, which helped with vision by being brighter and reducing the glare.  These lights were powered by batteries and were subject to the batteries having good power and lasting long enough for a full trip.

The advent of small quiet generators allowed flounder light options to expand.  Many flounder giggers switched to AC lights and could increase the power to several hundred watts per bulb and used 2 to 6 lights per boat to have the water around them lit up like a sports stadium.

LED lights were the next step as bright lights could be made lightweight and with low power draw.  With the lighter weight of LED lights, flounder giggers who didn’t have boats could wade and carry a small battery in a backpack.

Capt. Jernigan wanted to combine some of these ideas, so he designed and made his own flounder light system.  The key to his system is high output compact fluorescent lights.  Capt. Jernigan designed and built a system using several different sizes of  PVC conduit, flexible PVC conduit, waterproof bulb housings and 4 high output, low draw compact fluorescent lights.  The system is waterproof, easily adjustable for different heights, produces plenty of light, doesn’t require much electricity and runs cool.  He powers his lights with a small generator that runs at just above a whisper.

The generator can be used for other things also and Capt. Jernigan connects it to a battery charger he uses to keep his battery fully charged and power his trolling motor and running lights.  I asked about the possibility of adding a small coffee maker and believe I saw him smile in the moonlight.

Capt. Jernigan said the gig is the next most important part of flounder gigging and there are many options for both blades and poles.  He uses 3 prong Sea Striker stainless steel gigs that screw into Sea Striker aluminum gig poles.  He said the only issues he has ever had is with the rivets that secure the threaded end into the pole.  He drills these out and replaces them with stainless steel bolts and nuts and said it completely solves the problem.

Captain Jernigan said knowing your area and how the wind and tides affect it is imperative for successful flounder gigging.  He said areas with strong current should usually be avoided as the current can stir up the bottom and ruin visibility.  Capt. Jernigan prefers the falling tide as visibility is usually better.  He said by knowing the area, you should have places that are sheltered and can be gigged on any tide and with the wind from any direction.  Waves and choppy conditions will stir up the bottom and lower visibility and both are created by wind.

Knowing the tides is valuable two-fold as in addition to being able to see flounder laying on the bottom, there are many coastal creeks and bays that do not have enough water to float a boat at the lowest stages of the tide.  While it’s summer and the weather is usually nice, being stranded for hours during a low tide is not a pleasant way to spend the evening.  Invariably, either insect repellant, food, drink, or raingear will be in low supply and needed.

Flounder gigging is an excellent way to secure some flatfish for dinner and the freezer, but it’s so much more than just that.  It is an adventure that has to be experienced to be appreciated.  There are guides, like Capt. Allen Jernigan of Breadman Ventures (www.breadmanventures.com, Breadman Ventures on Facebook and 910- 467-1482) at various places along the N.C. Coast that offer flounder gigging trips as part of their guide services.

I suggest booking a flounder gigging trip with one of these guides to see if you like it.  They will have the needed equipment and know where to go.  While it isn’t for everyone, many fishermen fall in love with being on the water at night to poke flatfish and put together their own setup after trying it a few times.  You may find you enjoy being on the water at night more than you thought you would.  The fresh flounder fillets are nice too.