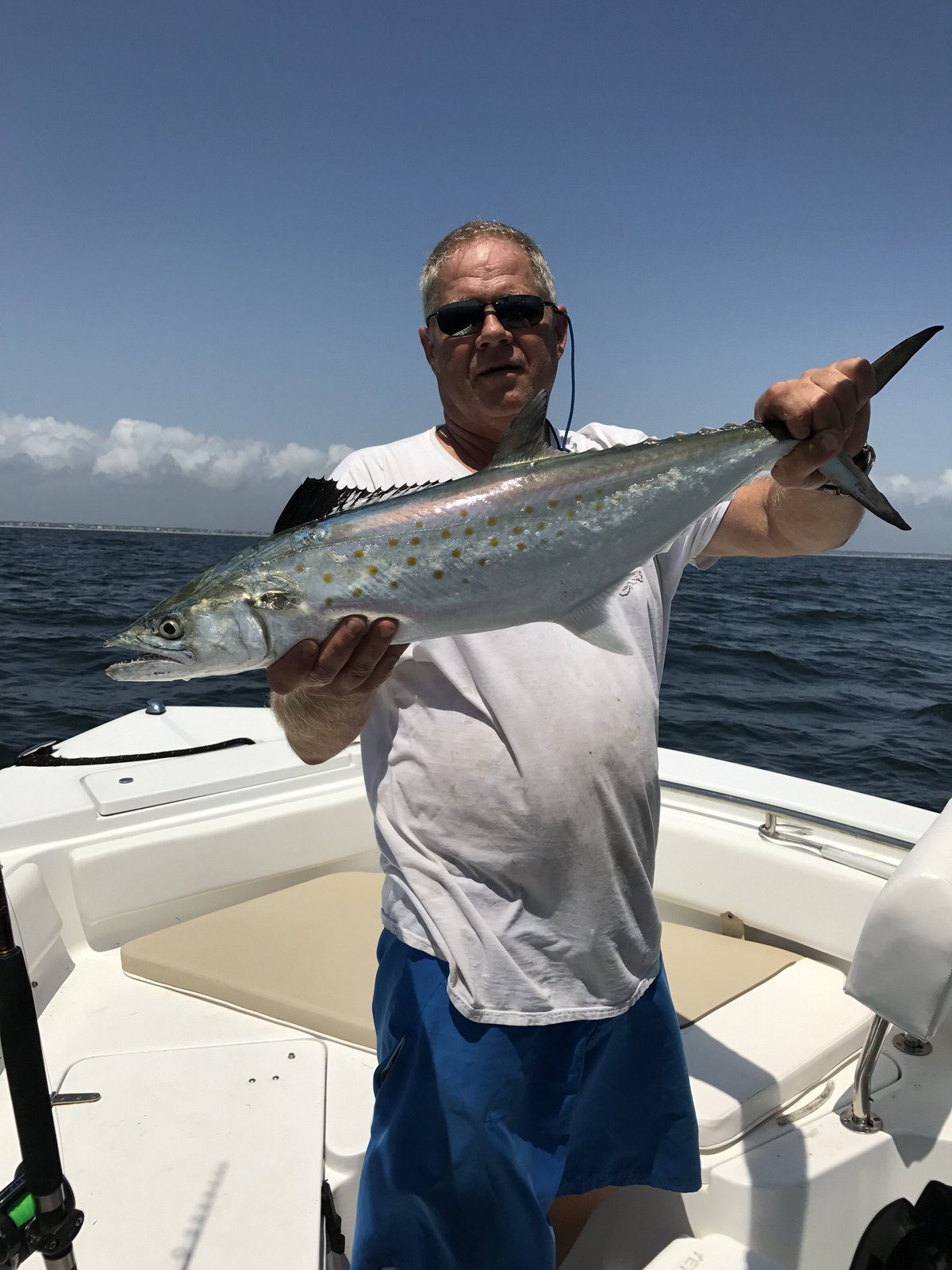 It happens every spring. There may be a few advance scouting parties during April, but by May the sneaky Spanish Armada is surging up the Carolina Coast with plans to take over the nearshore ocean waters.  Even with thousands of eager fishermen watching and waiting for their arrival, with plans to intercept and catch as many as possible, they make it by and become a primary force in nearshore ocean waters throughout the summer and into the fall.

These Spanish aren’t the sailors that made the Spanish Navy a force in history, but members of the mackerel family that plan to assert their dominance and attack unwary schools of baitfish.  Spanish mackerel make their way northward from their winter hiatus off southern Florida each spring and ravage most baitfish on their way.  North Carolina isn’t the northernmost of their migration, but is far enough many choose to stay until the water cools and baitfish leave in the fall.

Spanish mackerel, Scomberomorus maculatus, are described by Dr. Charles Manooch in his book, Fishes of the Southeastern United States, as “Beautifully colored fish, with a slender, graceful body that is prized for its table and sporting qualities.”

A continuing description would add that they travel in schools, have ravenous appetites and thrill more fishermen, young and old alike, that any other coastal fish.  It should also add they are a preferred guest of honor on many dinner tables. 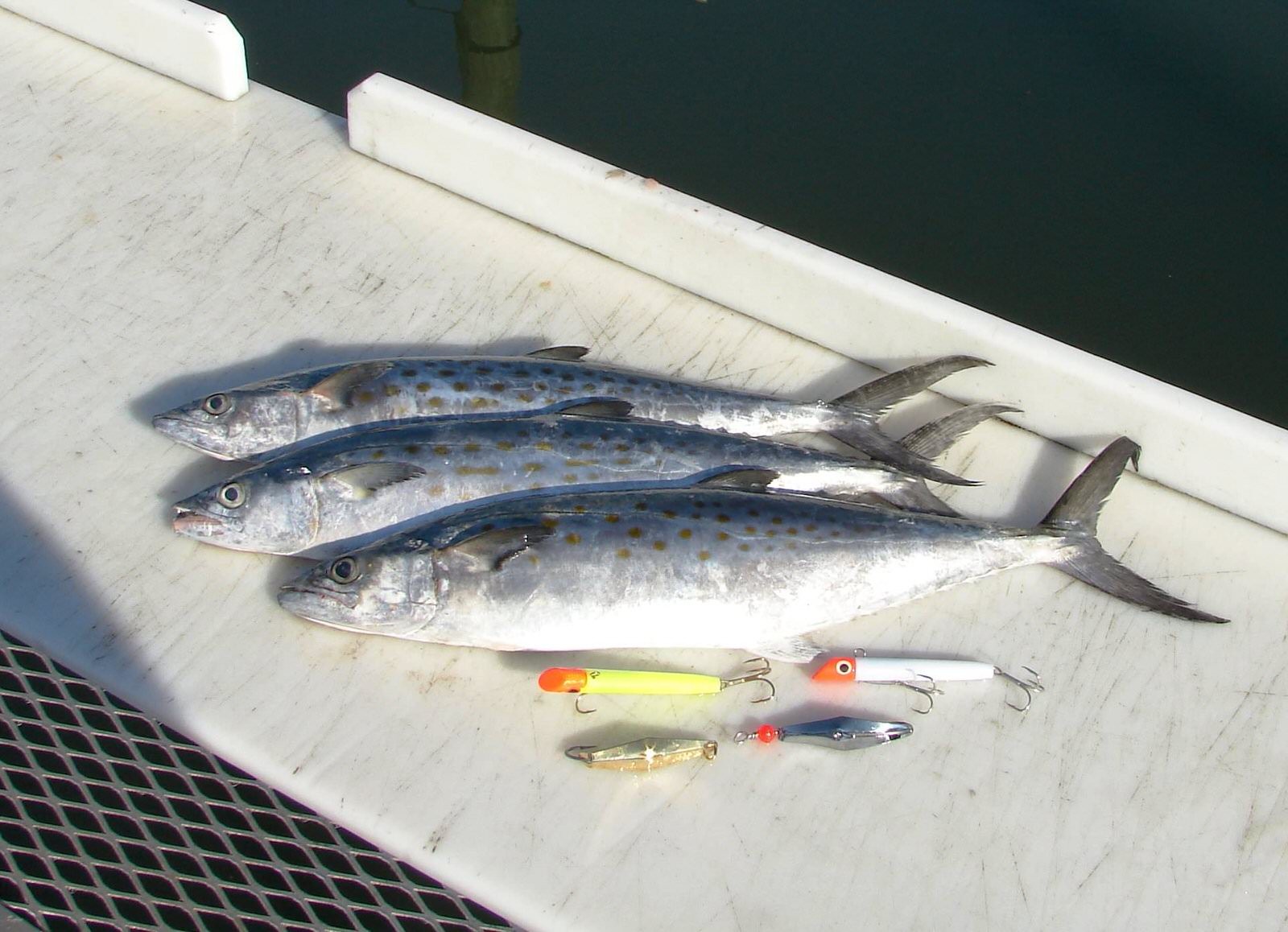 Spanish mackerel are one of the smaller, but not the smallest, members of the mackerel family.  They are sometimes confused with their king and cero mackerel cousins, but there are definite ways to easily tell them apart.  Spanish mackerel are greenish on their upper backs , with silver sides and belly. They have yellow/gold spots along their sides and a lateral line that arcs from their upper back at mid body to the middle of the body at the tail. Their telltale marking is a black spot at the leading edge of their forward dorsal fin.  A diagram and picture are attached.

According to a spokesman at the N.C. Division of Marine Fisheries, there has never been a documented catch of a cero mackerel in North Carolina.  Some fishermen want to claim it, but so far none that were thought to be ceros actually were.  Cero mackerel markings are more bar-like rather than spots.  Many young king mackerel have spots, but their lateral line is different.  Only Spanish have the black area on the leading edge of their forward dorsal fin and it is a positive identifier. 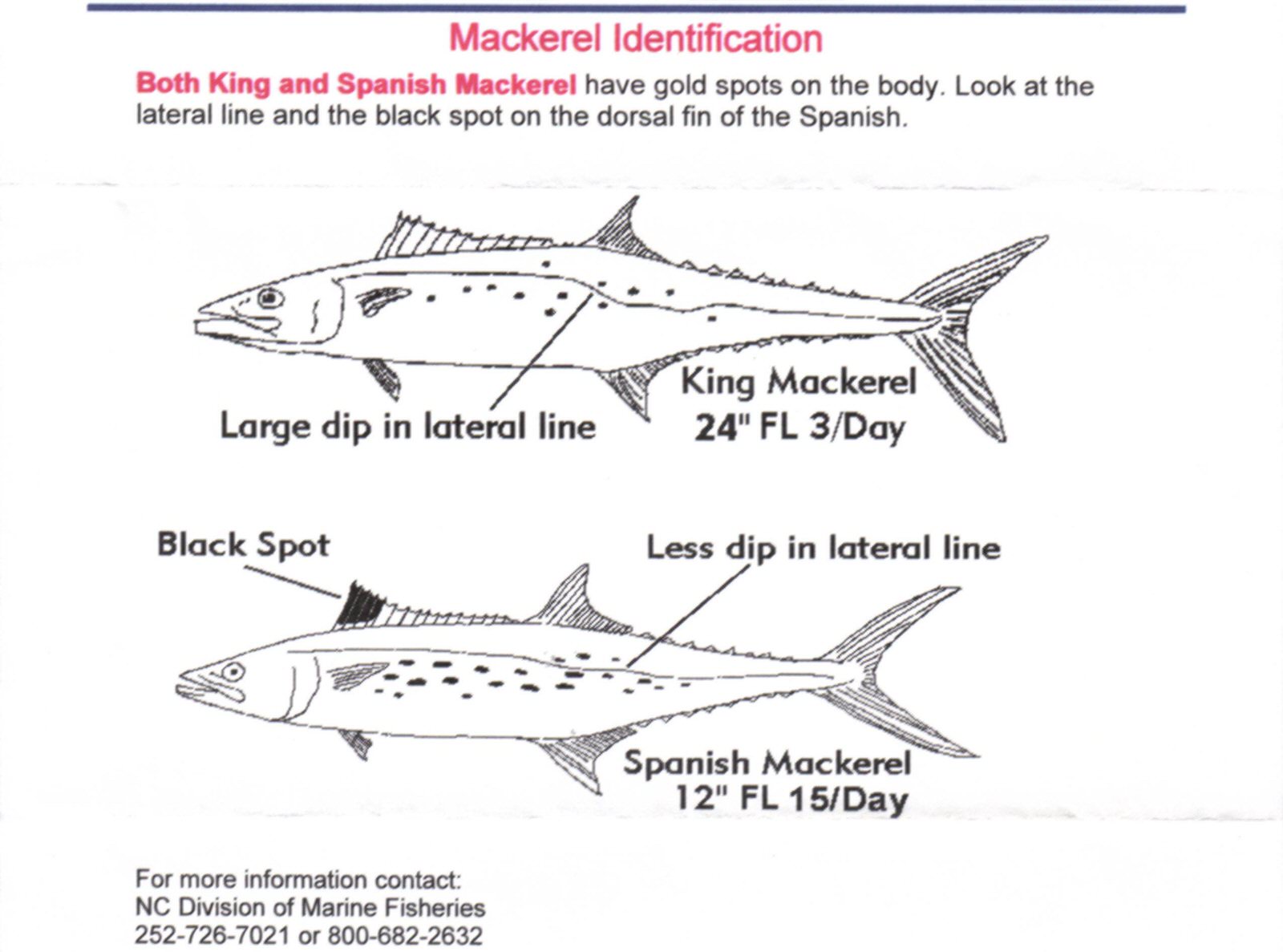 Mackerel are considered oily fish and some people consider them strong flavored.  Spanish mackerel are one of the lighter flavored fish in the mackerel family and are the exception many folks make to not liking and eating mackerel.  Oily fish, like mackerel are a good source of vitamin D, protein, some B vitamins and selenium.  They are also a rich source of omega-3 fatty acids, a type of fat that is good for our health and considered to help prevent cardiovascular disease, prostate cancer, age-related vision loss and dementia.  If you don’t already enjoy them, maybe you should give them a try.

Spanish mackerel have a trifecta of positive attributes going for them.  They are fun to catch, good to eat and good for our health.  If you don’t want to rush out and buy a boat, they are also caught from the ocean piers and occasionally by longer casters slinging lures just beyond the breakers.

Most Spanish typically mackerel range from less than a pound to around 3 pounds, but there are larger ones.  North Carolina offers an Outstanding Catch Citation for Spanish mackerel of six pounds and heavier and award a bunch every year. The world record Spanish mackerel weighed 13.0 pounds and was caught by Robert Cranton off Ocracoke in the fall of 1987.  The regulations for Spanish mackerel are a minimum size of 12 inches fork length (tip of nose to the middle of the fork in the tail) and a limit of 15 fish per fisherman per day.

Spanish mackerel are primarily caught in the nearshore ocean, from just beyond the breakers to a few miles offshore. However, like many other fish they stay with the bait when feeding and sometimes move farther offshore or follow baitfish through inlets, into the sounds and larger coastal rivers.

Most Spanish are caught by trolling, but they also respond well to small flashy lures cast and retrieved quickly and live baits.  While they generally feed on smaller baitfish, they can be voracious and fearless when in feeding mode and occasionally hit large lures and baits intended for larger fish. 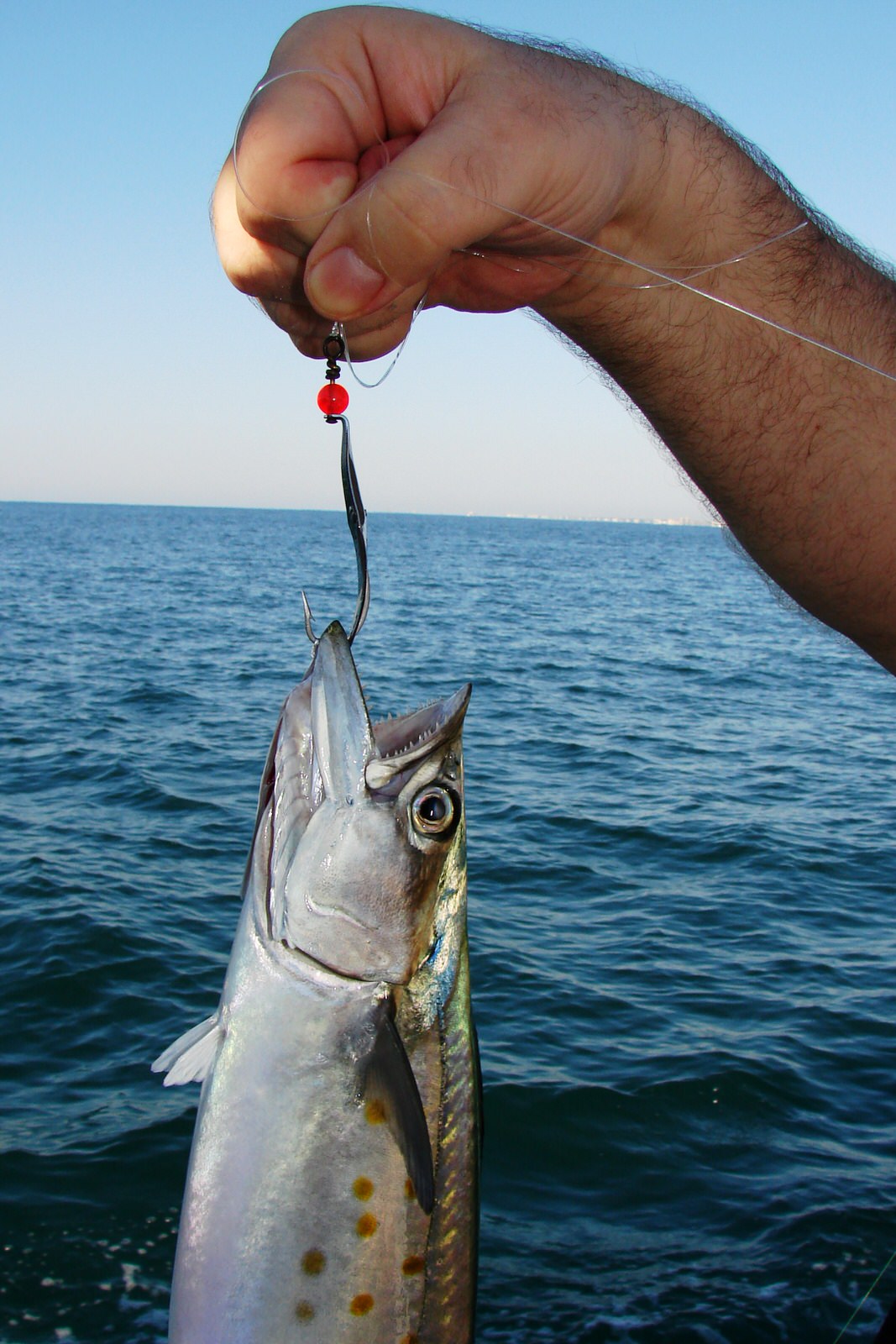 Clarkspoons are the long time go-to trolling lures for Spanish.  They are available from size 00 (smallest) to size 5 (largest).  The 0 and 00 sizes generally produce best in the spring, with size 1 sometimes working well in the fall when baits are larger.  The first Clarkspoons were silver, with gold added about 25 years ago, then models with flash strips in various colors in the past 10 years or so. The latest are colored and a silver model with a scale pattern.  Other good Spanish lures are Mackerel Trees, which use several short pieces of small surgical tubing and a Clarkspoon on a multiple hook rig, Mackerel Dusters, which place a Mylar skirt approximately 18 inches ahead of a Clarkspoon and Bird Rigs, which use a single Clarkspoon with a shorter leader, on the surface behind a floating “bird”.

Small planers and trolling sinkers are used to get Clarkspoons, Mackerel Trees and Mackerel Dusters to different depths below the surface.  Spanish can be spooky and long monofilament or fluorocarbon leaders are considered necessary by most fishermen.  Twenty feet is the suggested length for the leader, which is between the planer or trolling sinker and the lure.  Mono leaders in the 20 pound range work well in most situations.  They can be clear, dull green or gray and some fishermen believe the gray and dull green leaders catch better than clear.  Fluorocarbon leaders can be heavier, up to 30 pounds, as it has a reflective index near water and blends in better than monofilament.

A typical trolling spread for Spanish mackerel is 4 or 5 lines with most below the surface and one on the surface.  Some fishermen use all planers or all trolling sinkers, but I like to begin with a mixture of them.  They make noise going through the water at trolling speed and some days Spanish don’t seem to like one or the other.  By using both, you can still catch fish when this happens and hopefully realize what is happening and switch the other lines so they produce also.

The beginning Spanish trolling spread I suggest uses 5 lines.  It starts with a number 2 planer on one line and another line with a 4 ounce trolling sinker at staggered distances behind the boat on the starboard side.  On the port side, there would also be 2 lines, one with a number 1 planer and the other with a 2 ounce trolling sinker.  The 5th line is a bird rig, down the center of the spread as the longest line.  This spread covers different distances behind the boat and different depths.  Trolling speed begins at about 6 knots and some days a little faster is better.

Pier fishermen and boaters who like to cast and retrieve have several choices of jigs.  One of the most popular is Got-Cha Jigs.  There are several colors and sizes and some have feathers or different hooks. One thing that stays true through all of the sizes and colors is that Spanish prefer their Got-Cha Jigs with gold hooks.  Gold hooks usually make for better action on any day and sometimes they are the difference between catching and not catching.

Clarkspoons are light and were intended for trolling. With their success, fishermen asked for a Clarkspoon heavy enough to cast.  About 15 years ago, Clarkspoon came out with a device called a Clark Caster to allow casting Clarkspoons.  A Clark Caster is a short piece of heavy wire with a small (1/8 to 1/2 ounce) bullet weight and a spinner.  It clips in front of the Clarkspoon to add weight for casting and the spinner adds flash as it is retrieved.  They have been well accepted in some areas and not so well in others, but they allow casting Clarkspoons and catch fish – and that’s what they were intended to do.

Spanish generally eat smaller live baits, but many are caught each year that attack baits intended for kings, cobia and tarpon. The baits can be slow trolled, suspended under a float or balloon or tethered from a pier.  A piece of light wire is used to avoid cut-offs from their razor sharp teeth and one or a pair of small, size 6 or 8, treble hooks are used. They can buzz a lightly set drag pretty well and are especially fun to catch on trout/flounder/drum outfits.

Spanish mackerel are tasty prepared in a variety of ways.  They fry, grill, broil and blacken well, whichever you prefer.  About 25 years ago I was introduced to grilled Spanish hobo dinners at a fishing tournament at Hatteras and they have become a favorite. They had salt, pepper, onions, some butter and I’m not sure what else between two Spanish fillets that were wrapped in foil and cooked on a grill.  They sure were and continue to be really good!

Spanish mackerel are one of the first fish of summer to arrive each year and they are arriving now.  The fun begins with catching a limit and the smiles last longer than it takes to clean up after dinner.  That’s a couple of the reasons why they are a favorite of experienced and aspiring fishermen alike!