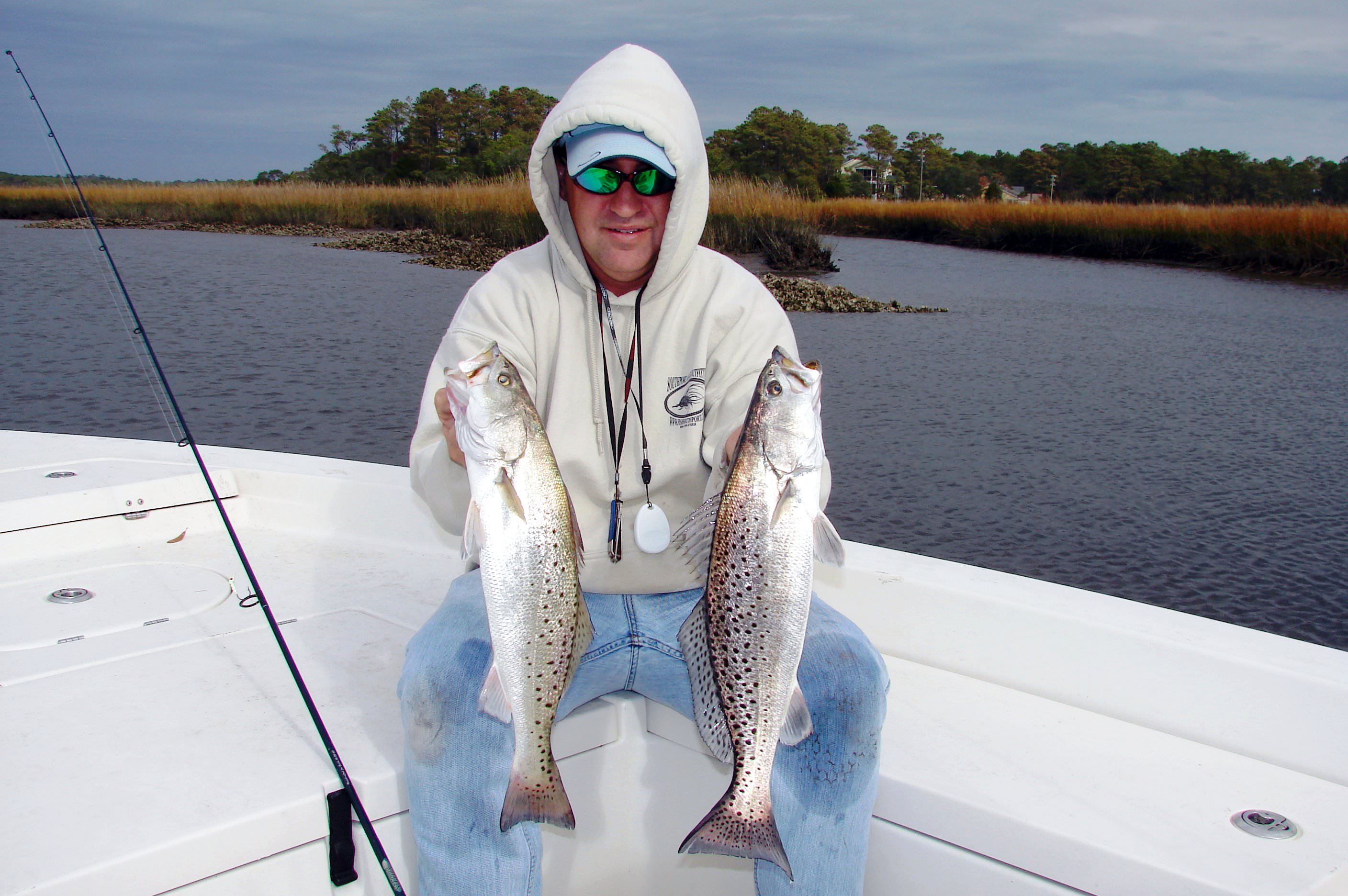 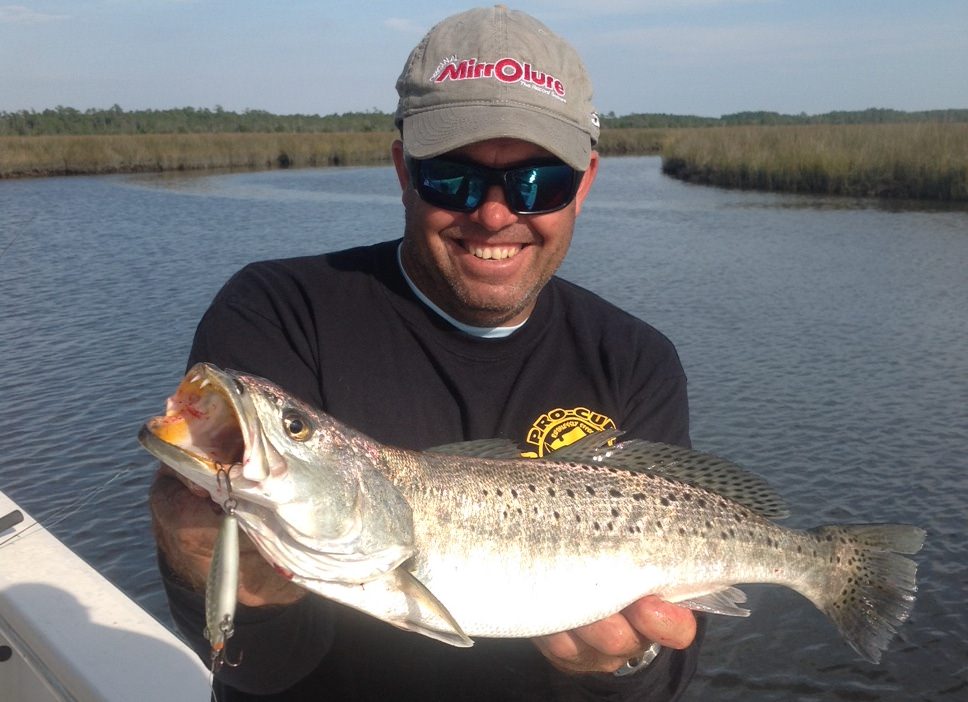 What a difference a year makes.  A year ago the temperature was dropping and many creeks, shallow bays and more were freezing.  There were speckled trout stuns and kills and in a few places it was bad enough there were also red drum kills.

The N.C. Division of Marine Fisheries responded to numerous calls regarding the trout stuns and kills and found them stunned or dead and floating.  The first thing newly appointed DMF Director Steve Murphey had to do was issue a proclamation closing speckled trout season until June 15.  As always, this call met with mixed reviews.  There were fishermen who supported it and fishermen who said it wasn’t needed, especially in their area.  There are qualifications to make this call and all of them were met, so Murphey had no choice but to do it.

Here we are a year later and speckled trout fishing is excellent.  A big percentage of the specks being caught are undersize and must be released, but it’s good to see them.  Biologists tell us that specks begin to spawn in the spring once the water warms and continue to have batches of eggs into the fall.  The closure protected the first half of the spawn and it worked. Those 10 to 13 inch specks are the young of the year.  They’ll be 14 to 18 inches next year and will be spawning.  Biologists tell us specks begin to spawn around 12 inches so some of the ones born early in the spring may have gotten in a batch or two of eggs this year.

There were also some genuine gator trout in the mix. Every tackle shop with a speckled trout tournament was posting fish heavier than 7 pounds leading it.  There were some 8 pounders scattered about and at least one 10 pounder.  Other huge fish were released.  There were 31 and 33 inchers reported as released.  Knowing a 25 inch speck will weigh around 5 pounds, it’s easy to realize those were big trout.

Last winter’s freeze didn’t affect puppy drum as badly as it did specks, but it’s never good when weather conditions stun and kill fish.  They were down a little in the spring and then didn’t care for the ultra hot summer weather, but came on strong later. 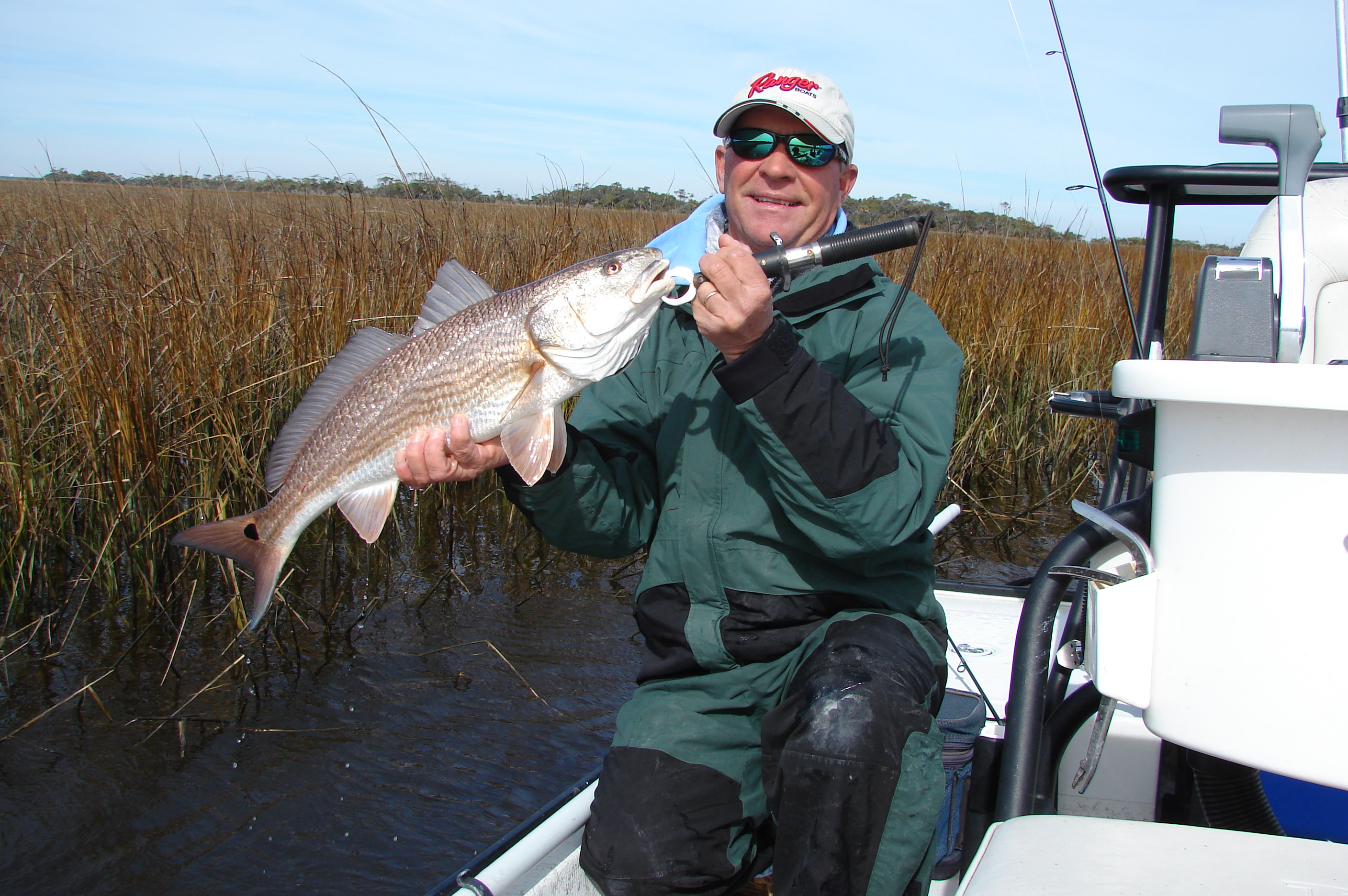 2018 was a very good year for old drum in the Pamlico Sound and Neuse River.  They arrived early and stayed late.  They were there spawning and as long as they stayed in the sound and river, there should be lots of smaller pups around next year.  In 2 to 2 1/2 years those will be slot fish and in four years they should reach 30-32 inches and begin to spawn too.

The speck and pup action has been good all fall and into the winter.  We had some cold weather in early December that dropped the water temps to below 50 degrees for a week or two and their activity slowed.  However, with four days of sunshine each week and highs in the upper 50’s and 60’s, the water has warmed back to the mid 50’s and they are feeding regularly again.

Some of the days with bright sunshine, specks and pups are active and aggressive and bite just like they did in the fall.  Then it gets cloudy, they aren’t as warm and the bite slows along with their activity level.  They haven’t quit biting, they just need a little more coaxing and a good fishing plan.

Sunny winter weather improves the attitude and energy level of fish just like it does fishermen.  The water temperature difference between a cloudy, overcast day and a bright, sunny one may only be a degree, but it makes a big difference. If the temperature warms several degrees, the intensity of the bite may ratchet up significantly.

There are a few things fishermen can do to locate warmer water.  Typically, the water is warmer the farther you are from the main body of the river, large creek or Intracoastal Waterway.  Creeks get smaller and shallower and are easier to warm – especially if the bottom is dark and some spots are dry during low tide.  A heavily wooded creek might not get much sun heating, but is still usually a little warmer than the larger body of water it connects into.  An exposed creek in the open marsh can come alive with the sun’s warming.

This example is extreme, but happens in this creek and others like it regularly.  Recently I fished a marsh creek that runs off a bay in the lower Cape Fear River.  Just a little ways in, the creek was 1 to 2 degrees warmer than at its mouth.  We picked our way another mile or so through the marsh to where there are some extensive flats, with holes ranging to 10 feet deep nearby.  The water was 4 to 4 1/2 degrees warmer this far back in the marsh and the fish were aggressive.  We scraped bottom a few times, but the hot fishing was well worth it.

The pups had come up on the flats to warm up and were grabbing baits and running.  The specks had moved out of the deepest holes and were feeding in 2 to 4 feet of water. They were hitting lures with enough thump it wasn’t difficult to tell you had a strike.  The action in that pocket of warm water was more like October than late December. 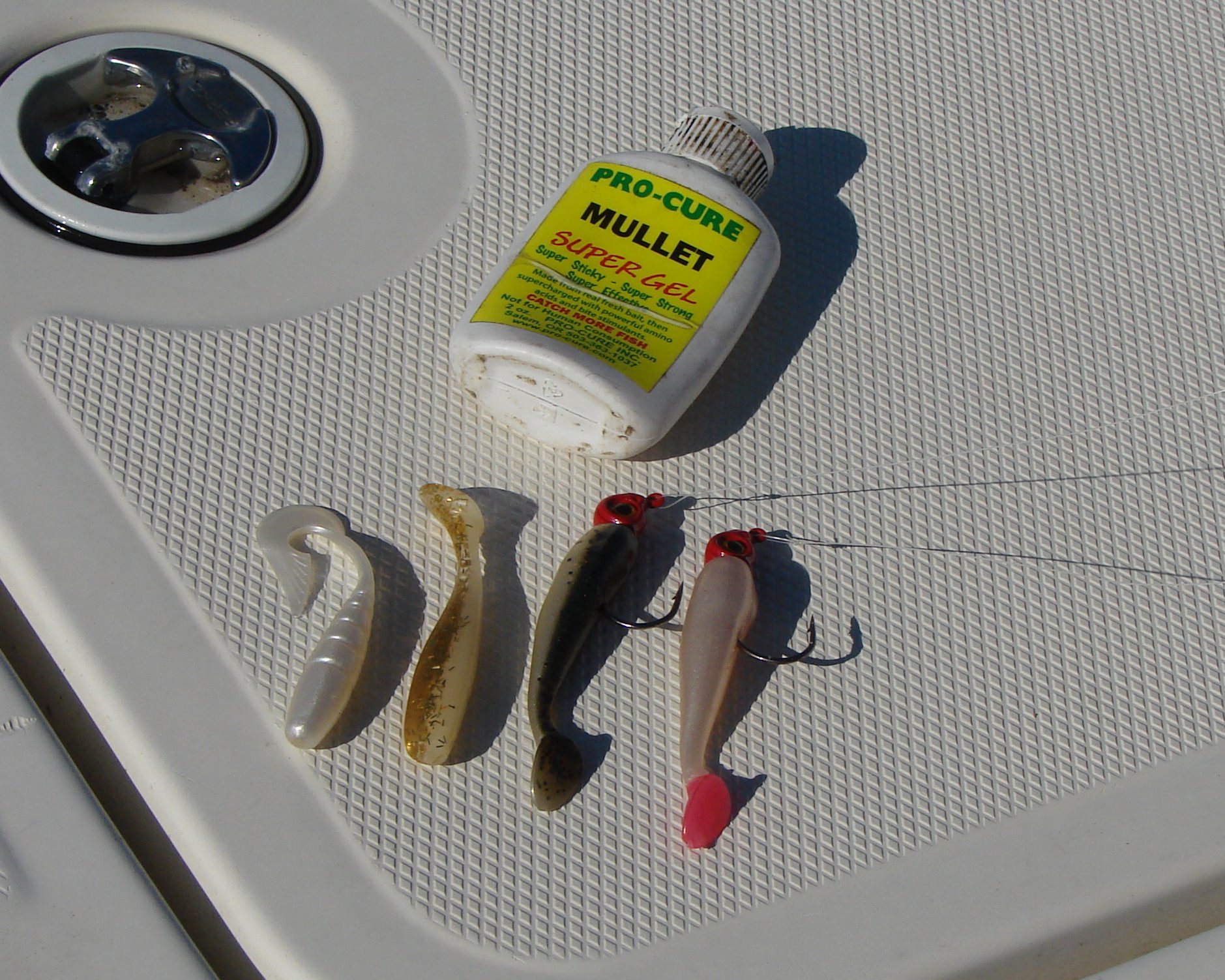 NOTE:  We had switched to smaller lures and coated them with Pro-Cure Scent Gel.  Somewhere many years ago a successful fisherman recommended downsizing and fishing slower in cold water and it was good advice.  He said the fish will expend energy to chase a smaller bait when they won’t chase a large one.  That was long enough ago there weren’t scents available for baits.  Scent may be the thing that seals the deal and gets a fish to chase something, so we have an advantage now that wasn’t available 30 years ago.

Weather also makes a difference.  That cold, overcast, gloomy weather that makes fishermen dull and moody does the same to the fish.  It also cools the water and slows their metabolism and need to feed.

Everything changes when the sun comes out.  The first day of warmer sunny weather after a cold front or winter low pressure makes fish and fishermen feel better. Fish may feed that first afternoon, but each day the sun continues to shine gets a little better.  The second day the fish are more active and begin feeding and this improves again on the third day.  These are the big improvements.  The good trend continues on subsequent warm, sunny days, just not to the same degree.

Fishing around low tide into the first hours of the rising tide helps too, especially in areas with larger tide changes.  The sun shines on more creek bank and exposed bottom surface at low tide and warms them.  When the tide is low, there is less water to warm and the fish are concentrated.  All this is important as there are days a warming of only a half to one degree makes the difference between fishing and catching.

If that foul demon work still gets in your way for fishing time, plan ahead to make the most of the time you can go.  Watch the winter weather and tide tables like a hawk. Look at the national weather maps and regional forecasts.  You should get pretty good at seeing generalities of how weather systems move.

Find a weather predictor you trust and pay attention. Look for periods of sunny, warmer weather.  Two days is a start, but three or more days is better.  Give the fish time to warm a little and react.

Weather Underground (www.wunderground.com) is pretty good for inshore fishing.  They aren’t perfect, but this is weather and it’s an inexact science.  Many weather prognosticators are happy if they are correct more than half the time. Weather underground is easily better than that.  They don’t predict fishing, but give you the temperatures and frontal movement to figure it out on your own.

Even in protected waters, lighter wind is good too. Rippled water will cool quicker than calm water and a brisk wind is uncomfortable to fishermen.  It also affects the accuracy and distance of casts. Low tide occurring after lunch is usually better than when it is earlier in the day.  This allows the sun to shine on the lower water and exposed bottom and banks for several hours.

Specks and pups are biting.  The fishing varies form days that aren’t so good to days that are really good.  Don’t give up, but use what you know about fish and the weather to plan fishing trips at the optimum times.  The fish will bite when conditions are right and these tips should help you plan your fishing trips to be there when they’re hungry. 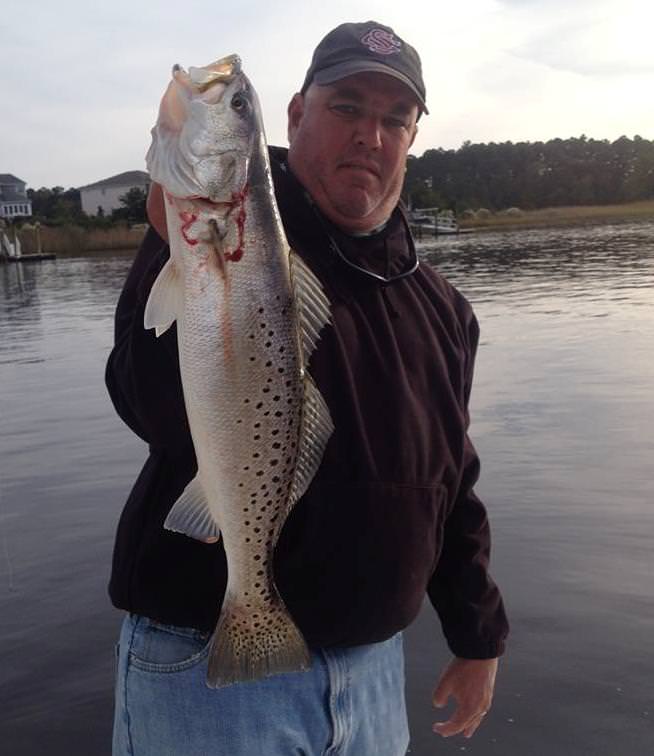