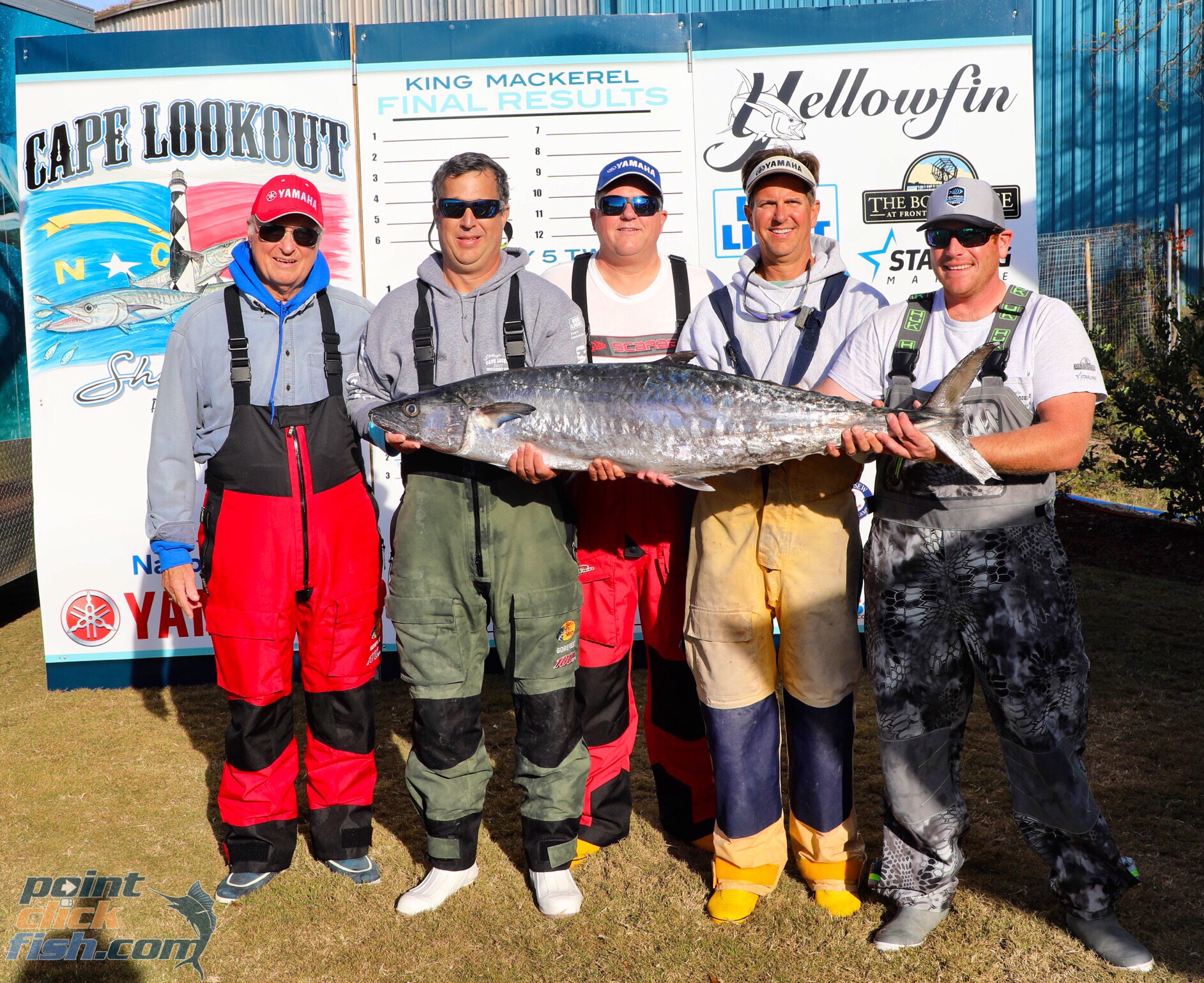 The King’s Ransom Fishing Team competed well enough during the year to qualify for the Cape Lookout Shootout Series Championship and saved a little something extra to top the field by almost eight pounds to win the 2017 Championship Tournament.  Capt Ron Dorsey, Jr., Ron Dorsey, Sr., Jon Dorsey, Matt Gravitt and Trey Grady boated a 51.24 pound king on November 18 to claim the championship and just over $40,000 in prize money.

The King’s Ransom’s king was the only 50 pounder of the tournament and the first tournament 50 pounder caught on their boat.  Ron Dorsey, Jr said he measured it before icing it down and was hopeful it would break 50 pounds, but cautiously estimated it in the mid to upper 40s.

From there it was almost 9 pounds back to Capt. Wayne Howard and the Hook Um Up crew in second place with a 42.38 pound king.  However, this king was large enough to secure “Team of the Year” honors for Howard and crew.  Capt. Mitch Yates and the crew of the Sea Rat finished third with a 40.79 pound king.  The Windy Conditions, with Capt. Henry Tillett and crew finished in fourth place with another king that topped 40 pounds at 40.45 pounds.

“We were fortunate to win this tournament and are especially happy to do it against the excellent fishermen in this field,” said Ron Dorsey, Jr.  “The final qualifying tournament in this series was a few weeks ago and fishermen caught 10 kings that weighed more than 50 pounds.  However, the weather has changed several times since then, the water has cooled and gotten dirty and several cold fronts have passed through the area to further complicate things.  It was difficult to decide where to fish.

“My brother and I had a serious discussion about why we fished where we did instead of running back to off Hatteras where all the big kings had been caught in early November,” Dorsey continued.  “He wanted to go there and I wanted to stay close to Beaufort and fish the East Rock.  I had studied the seawater imaging reports for several days and the water off Hatteras looked dirty and cold.  That was the report from the tournament last weekend too.  I had also spoken with friends at Hatteras and they said the action had slowed.  Our team rules are that I pick the fishing spot and our dad stepped in to remind us of that.  I’m sure glad this worked out the way it did.”

Dorsey said they had collected some bluefish for bait, but didn’t have any menhaden.  He offered thanks to Capt. Johnny Hudson, who hadn’t qualified for the tournament and gave them some menhaden he had penned.  Dorsey said this is what allowed them to be on site and fishing early and that was a key to their success.

“We checked out and ran straight to East Rock,” Dorsey said.  “It isn’t a secret it often holds big kings during November and the water there looked as good as anywhere on the seawater imaging reports.  A friend had caught a couple of kings in the mid 20s there on Thursday and, while they aren’t tournament winning fish, the conditions hadn’t changed and I hope that would give some larger fish time to move in.

“There were five boats on site when we arrived and we quickly set a spread,” Dorsey said.  “The action began shortly after.  Just before 8:00, we had a strike that turned out to be a roughly 25 pound king.  We quickly boated it and iced it down.

“We worked our way back onto the rock with a new spread and at about 8:30, we had another strike,” Dorsey said.  “While it didn’t make a long or fast typical king run, this fish had hit a bluefish on the long line and we were hopeful.  After just a couple of minutes it turned and ran by the boat just under the surface and close enough we could see it.  We now knew it was a nice king, but we didn’t know quite how nice.”

After passing the boat, the king went deep an began slugging it out with angler Matt Gravitt.  Gravitt would get in a little line and then the king would take most of it back.  However he was making headway and knowing it was a decent king he wasn’t rushing it.  Finally at about 9:00, Gravitt coaxed the big king within range and Trey Grady stuck it with the gaff, then heaved it over the side.

“At this point we got happy,” Dorsey said.  “We hollered a bit, maybe louder than we thought.  One of my friends fishing on the other side of the rock texted me that he heard us yelling and knew we had a good fish.  It was good fish and the measurements showed mid to upper 40s.  We knew it was a special fish and later, when we looked at it beside the smaller fish, we realized how much larger it was.  This is when we realized its girth held all the way to the tail and should weigh heavier than we expected.  Now we were thinking it might be a upper 40s fish and hoping it was larger.  Hearing it announced as 51.24 at the scales had us hollering again.”

Dorsey said they fished at East Rock several more hours but the bite had died.  He said they weren’t the only boat to land a nice fish there and four more of the top ten fish were caught by fishermen around them.  They moved to the P Buoy Ledge, but didn’t have a strike there and left a little before 2:00 to have a leisurely ride to the scales to find out what their big king weighed.

“I would like to thank Chad (Shingleton) for his idea of this series and also to all the folks who make it work,” Dorsey said.  “Supporting Military Appreciation Day is a great cause and still they have excellent payouts for the fishermen.  “We are a mainly family fishing team that includes my dad, Ron Dorsey, Sr. who is still fishing with us at 78, my brother Jon Dorsey and our lifetime friend Matt Gravitt and it’s very nice to have such a good series we can fish without having to travel.  Trey Grady fishes with us occasionally and was with us today.  He’s a young spark plug and was definitely our Energizer Bunny for this tournament.”

The Cape Lookout Shootout Awards Banquet was held at Starling Marine in Morehead City following the tournament.  In addition to the awards from the Championship Tournament, other tournament winners and all championship qualifiers were recognized.  Cape Lookout Shootout founder Chad Shingleton said the series owes everything to their fishermen and sponsors and praised them as the best in the sport.

“This is the fourth year of the Cape Lookout Shootout and I’m amazed at where we have come,” said Shingleton.  “We went from wondering if we would have our 40 boat minimum in the first year to having a backlog of fishermen wanting to participate.  That first year we had 50 boats and paid out $275,000 in prize money to the fishermen and donated $8,000 to Military Appreciation Day.  The prize payout has increased every year and this year it reached $532,000, which isn’t bad for a 60 boat series.  Our total prize payout for the 4 years is almost $1.4 million and we have donated $38,000 to Military Appreciation Day.  I’m very pleased with where we’ve come and we start meeting in two weeks to plan the 2018 series and make it bigger and better.”

Military Appreciation Day (MAD) is an all-volunteer, non-profit organization dedicated to taking active duty military personnel fishing as a way of thanking them for their service.  (MAD was formed in North Carolina with their first event in Morehead City in 2006 and incorporated in 2007.  In 2017 MAD hosted military personnel and their families for a day of fishing and general R&R in Morehead City, N.C., Southport, N.C., Charleston, S.C. and Norfolk, VA.  They have taken more than 9,000 troops fishing in that time and entertained their families while the troops were fishing.

‘We just want to emphasize that MAD is an all-volunteer organization and any funds donated are used for our trips,” said MAD board members Stuart Ussery and Jeff Schmucker.  “The donation from the Cape Lookout Shootout is major, especially for our Morehead City event.  In addition to supplementing the food and such, it helps us rent a head boat to complement the many fishermen who volunteer their time and boats and it helps us hire the pirate boat that is so popular with the kids and families.  The fishermen in this series are staunch supporters too, with all tournament winners over the years donating some of their winnings to MAD and many of them donating their time and boats for the N.C. MAD events.”

For more information about Military Appreciation Day and their events, visit their website at www.militaryappreciationday.org.

The Cape Lookout Shootout Committee will begin meeting soon to review the 2017 series and make any changes for the 2018 series.  While current teams have a guarantee of a slot in the 2018 series, they anticipate there will be a few teams that will not renew.  Those spots will be opened to the public.  For information on the Cape Lookout Shootout Series, the current rules and any changes for 2018, plus how to register if there are openings in the 60 boat field, visit their website at www.capeshootout.com.