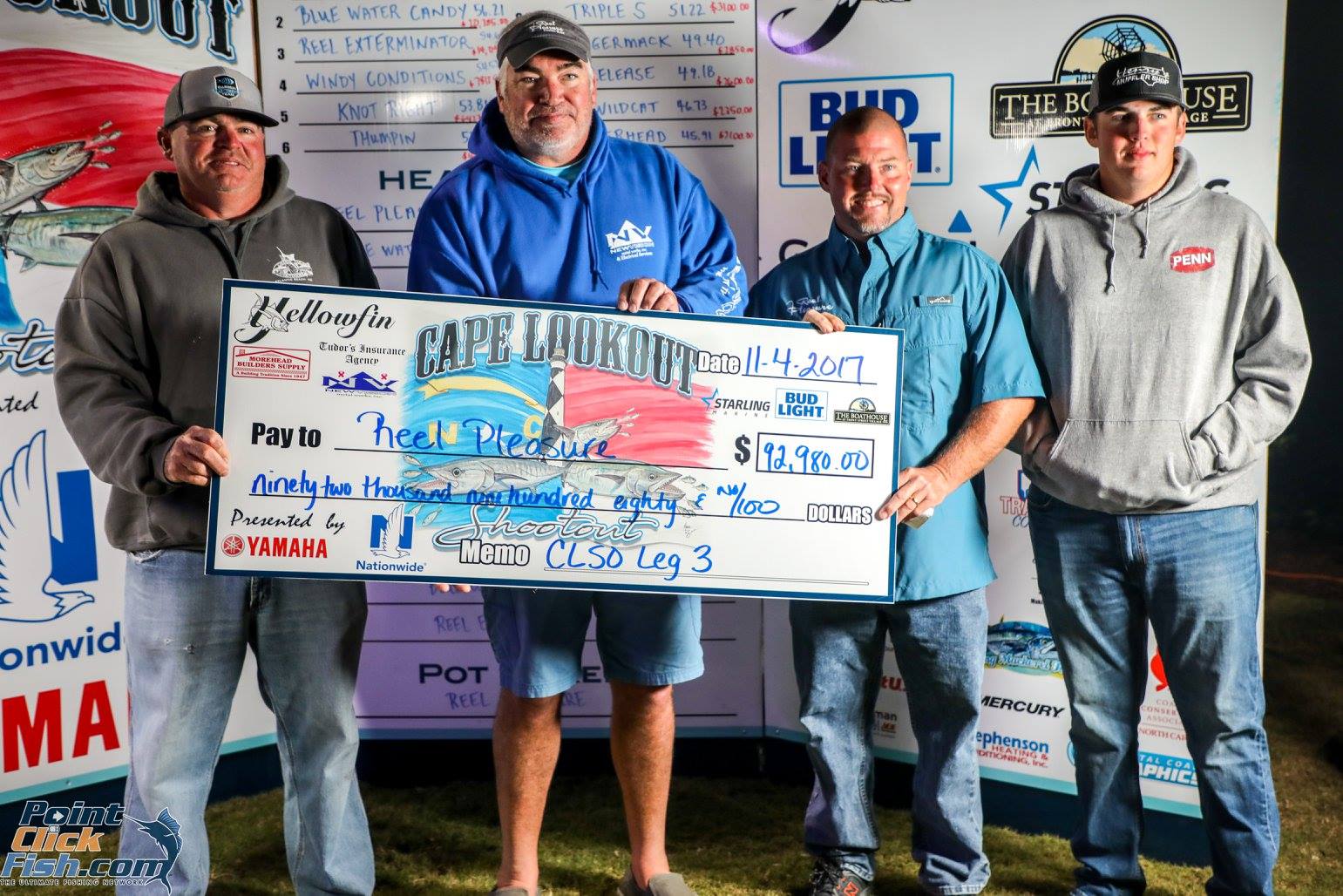 Capt Charles Dew of the Reel Pleasure said they saved the best for last and they certainly did.  Dew, of Macclesfield, NC., with teammates Ronnie Butler, Brian Hudson and Chase Hudson caught a 62 pound king mackerel to win the delayed Leg 2 of the Cape Lookout Shootout.  To avoid confusion we are referring to this as Leg 3 of the series since the event was delayed. The tournament had been postponed when Hurricane Matthew was heading up the coast during September and was actually held a week after the third leg.

“We decided to go north and it was the right decision,” Dew said.  “We headed out Drum Inlet and went north to a spot with a group of other boats.  We caught a lot of fish, including some nice fish, but this one really stood out.  We were sure it was in the high 50s, but weren’t sure it would make the 60s.”

“The bite started off slow,” said Chase Hudson, designated angler on the Reel Pleasure.  “There were some fish biting when we arrived, but the bite began slow and then built until it got good.  I believe we were in the right spot and had the right bait.  Fishermen were catching fish around us, but most were smaller.  This fish hit and fought like a big king the whole time.  It’s big, but it looked real big in the water under the boat.”

“Yeah, we stopped in the ocean on the way up and caught some nice fresh baits and I think that was the key,” Dew added.  “We were in a pack of boats, but they were spread out enough to give everyone room to fish.

“When I gaffed this fish, I called to Ronnie (Butler) to come grab his tail and help me get it over the side,” Dew said.  “It was heavy and I didn’t want to make a mistake at that point.  This was the first time we have ever used a second person to get a  fish in and I’m glad we did.  We knew it was big, but didn’t realize quite how big.”

Dew said they landed the big king at about 11:00 to 11:15 and pretty quickly made the decision to head in.  The wind was picking up and they didn’t know how much it might increase and they knew they had one of the top fish.  He said the ride in was tough as they were listening to radio chatter about other big fish almost the whole time.  They decided they needed to be sure to weigh this fish and hope it was large enough to earn an invite to the Cape Shootout Championship on November 17 and 18, so they continued in.

“Once we got there and weighed the fish, we had to wait several hours for other fish to come in and the scales to close,” said Hudson.  “Man, that wasn’t fun at all.  It was a long time and big fish were being weighed, so we were nervous.”

There was drama elsewhere too.  Several boats caught more than one fish on the plus side of 50 pounds and had to decide which one to weigh.  This is fairly easy with kings of less than 50 pounds, but most digital scales only read to 50 pounds.  These were big kings and it is difficult to compare inches of length to inches of girth while still in the boat.

Team Blue Water Candy, led by Capt. Jody Gay of Sneads Ferry, with Russell Weaver, Jeff Atkinson and Jennifer Atkinson, actually weighed the wrong fish.  Thankfully it didn’t matter in the standings as they finished second with the 56.21 pounder they weighed, but it would have added a second 60 pounder to the leader board if they had weighed their other big fish.  It weighed 60.28 pounds and wasn’t weighed until after the scales closed.

The Reel Exterminators, with Capt. Matt Canady, Lumber Bridge, and crew finished in 3rd place with a 54.66 pound king.  The run of 50 pound kings extended to 8th place where the Triple S weighed a 51.22 pounder.  These were big kings and the weights only dropped to 45.91 pounds for 12th place.

Capt. Gay earned Top Senior Angler honors and teammate Jennifer Atkinson earned Top Lady Angler honors for the Blue Water Candy catch.  Henry Tillett, Jr.  fished with his dad, Henry, Sr., and mom, Wendy, on the Windy Conditions and claimed Top Junior Angler Honors for their 54.52 pound king that also placed 4th overall.  The Tilletts were another of the teams that had to choose which to weigh  between two kings that exceeded 50 pounds.

There are multiple Tournaments Within A Tournament (TWTs) in the Cape Shootout Series and all of the top teams were entered in every one.  This made for a very impressive $92,980 payday for Capt. Dew and the Reel Pleasure crew.  They took first place in the Heavy 5, Big Daddy King, High Roller Heavy 3 and Potlicker TWTs.  Capt Dew said they don’t have any big sponsors so winning this is really good and helps a lot.  As happy as he was with the large check, Dew was more excited to score the win against a field he called “The best king mackerel fishermen anywhere.”

The win automatically qualifies the Reel Pleasure for the Cape Shootout Championship and that was one of their goals at the beginning of the season.  They hadn’t weighed fish in the previous tournaments, so the win was their only sure way in.  They’ll be looking for this fish’s grandma during the championship in two weeks.

The Cape Shootout Series has the highest potential prize money payout of any king mackerel series during 2017 and did this while limited to 60 teams.  The tournament paid $170,700 for this event and has paid out $468,596 for the 2017 series to date.  The total payout since the series began three years ago is approximately $1.4 million.  This explains why the field fills so quickly each year and there is a waiting list of competitors hoping to get a slot.

The next Cape Shootout Series tournament will be their series championship on November 17 and 18.  This will be held from the Boathouse Marina at Front Street Village in Beaufort.  After the three qualifying tournaments, the top 30 fishing teams and the three qualifying tournament winners will be invited to fish the championship.  Many of the teams said they wouldn’t be surprised to see several 60 pounders and all of the top ten kings surpass the 50 pound mark during the Championship.