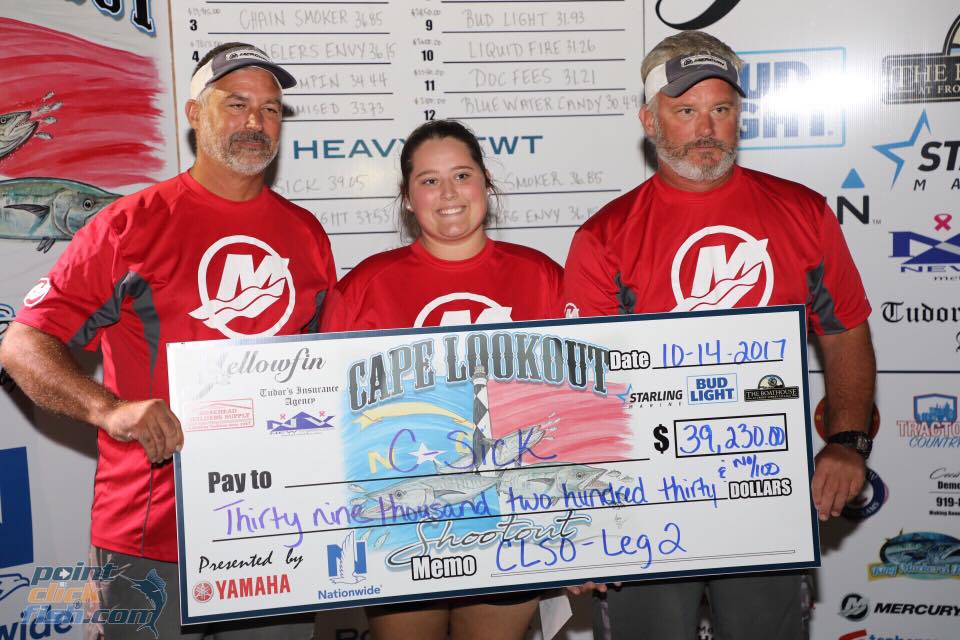 Capt. Bruce Brown of Team C-Sick said something happened to change their plans during the third leg of the Cape Lookout Shootout last Saturday.  He said it wasn’t motors or mechanical, but didn’t elaborate after that.  However, the change of plans turned out to be a good thing for Brown, his brother Stacy Brown and niece Lindsey Brown, as they caught their 39.05 pound tournament winning king at the plan B location.

“It actually turned out good, real good,” Brown said of their change in plans.  “We were headed up towards Hatteras, but ended up fishing off the Cape Lookout Rock Jetty.  The shorter run sure got us fishing quicker.  We already had a fish in the boat before we would have reached our original spot.”

Brown said they hadn’t been fishing long when the first king hit.  Lindsey Brown fought the approximate 25 pounder and they put it on ice.  The next king was smaller, so they released it.  Their big king was their last strike of the day and it came at 10:00 A.M.  Brown said they were glad to have a nice fish in the boat, but the rest of the day was rather boring.  Lindsey Brown also earned Top Lady Angler honors for catching the big fish.

“I’d like to say it was otherwise, but we got lucky,” Brown said.  “History says you should at least be on the east side and we had planned to go out Drum Inlet and head north.  When our plans changed, we headed to the Cape Lookout Rock Jetty and were fishing much earlier than we would have been otherwise.  It was an early bite too.  We had this fish in the boat within an hour and a half of catching bait.

Team Knot Right, with Capt. Scott Pelletier, Kent Raynor, Tim Parker and Jackson Huston, were one of the first boats out Drum Inlet and headed up the beach to the Potlicker.  They caught their first fish at about 8:45, but it was small.  The action was slow and it was almost two hours before their next strike.  After that they were wrapped up in sharks for several hours before deciding they needed to make a move.

“We couldn’t take it any longer and moved about 15 miles to the south,” Pelletier said.  “As soon as we got all the lines out, we hooked a fish that turned out to be our second largest fish.  Then, 10 minutes later we hooked the big fish.  We knew it was a nice fish, but didn’t think it would do as well as it did.  There was lots of radio talk about big fish and we know they’re always a possibility, especially here and at this time of year, so we didn’t get too excited.”

“We were very happy our fish placed second and were pleasantly surprised with the prize money,” Pelletier said.  “It takes a lot to run these boats and this will help.”

Because C-Sick wasn’t in the Potlicker TWT, Knot Right was the big money winner with $55,615.  C-Sick won the second largest amount with $39,230 and Chain Smoker was next with $13,915.  All the fishermen were complimentary on the high prize money payouts for a 60 boat field.

Fishermen found the sea conditions much nicer than during the first or second legs of this year’s Cape Lookout Shootout.  The first was fished in windy and choppy conditions and the second is still ahead.  It was postponed until November 3-5 when Hurricane Irma was approaching the area on its original date in September.

Brown and Pelletier said it was really an accomplishment to beat the other 58 teams in this field as they are the best fishermen and top competition in the county.  They said with the fall approaching even larger kings would move into the area and expectations are high for excellent catches at the rescheduled second leg in a few weeks and the championship after that.  Pelletier added that it will probably take the 55 pound king that was being touted on the radio this week to win either of those tournaments.

The Top Junior Angler was Tyler North on the Mom Said No.  He was followed by Ross Pennington on the Proud Mary in second place and Braxton Allen on the Wall Hanger in Third.