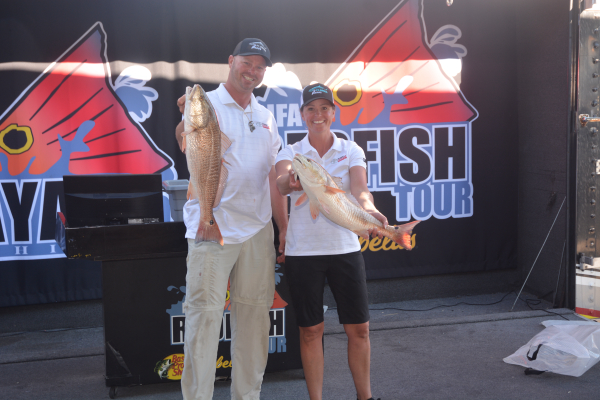 The team stayed close to the takeoff each day, only running 20 minutes to find their spot. Day one brought rain and wind with the second day being dry but cloudy with winds.

“We had to slow down and cast a lot on day one,” said Jimmy Adams. “The water was dirty the second day, but we just kept casting.”

The duo finished the first day with 17.24 pounds and the lead going into day two. Both days, the anglers fished Berkley Gulp! 4-inch shrimp under a popping cork, targeting redfish located around the hydrilla.

“We had a plan and stuck to it,” said Jimmy Adams. “It paid off with good team work. We had a lot of fun out there.”

The anglers sight-fished soft plastics in the Venice area and also ran into unexpected high winds.

Joe Wortham, of Oak Hill, Florida, and Harvey Cox, of Yulee, Florida, weighed a total of 33.25 pounds to take third place. The team fished the Wagon Wheel both days with soft plastics.

Going into the championship, Wortham and Cox had accrued 364 points in the Louisiana division. While a ways behind many teams in the Team of the Year race, a strong showing in Venice vaulted them to the top, earning the 2019 IFA Redfish Tour Team of the Year title. The anglers received $5,000 in cash for their title, courtesy of Cabela’s, along with paid entry fees for the 2020 season. All together, the team took home $11,045 in winnings.

For more information or to become a member of the IFA, visit www.ifatours.com.