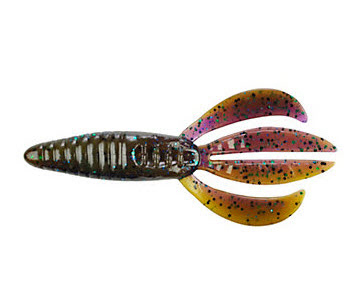 On day two of the 2019 Bass Pro Shops Big Bass Bash presented by Berkley, anglers will be permitted to use only Berkley products. In this four-part series from the Association of Collegiate Anglers, we are introducing competitors to a variety of baits that could work well at Kentucky Lake during the event. In this segment we will break down the PowerBait Pit Boss. This will be a great soft plastic to flip around shallow cover, as well as to use for a trailer on your favorite jig.

Let’s start by talking about the specifics of the PowerBait Pit Boss. Designed by professional angler Skeet Reese, the Pit Boss is intended to mimic both baitfish and crawfish. The bait is available in three different sizes: 3 in., 4 in., and 5 in. Each size is capable of being flipped on its own, or being rigged on the back of a jig or bladed jig. Along with three different sizes, the Pit Boss also comes in roughly 20 different color options. The Pit Boss is infused with PowerBait flavor, giving you more time to set the hook.

Flipping shallow cover is one of the best ways to get a big bite on Kentucky Lake. In 2018, Brian Pahl of Bethel University won with a bass weighing over nine pounds. He caught the bass by flipping a jig to flooded brush up shallow. The nine plus pound fish was hanging out in a shallow bush waiting for an easy meal to pass by.

Kentucky Lake offers plenty of shallow cover for anglers to fish. As the lake goes through a scheduled winter drawdown, shallow wood and rock will become even more valuable. When lakes go through a scenario where lake levels drop, fish then have fewer and fewer places to hide. So, as they pull out from the shallows, they will try to find the first piece of hard cover they can find. Flipping a PowerBait Pit Boss to that isolated cover could result in a prize-winning fish on day two of tournament action.

Tournament rules stipulate that all jigs, chatter baits, spinnerbaits, and lures of the sort must be paired with a Berkley bait as the trailer. The PowerBait Pit Boss is also a viable option for using in those scenarios. Go online today to view and purchase the PowerBait Pit Boss. With just two weeks until the tournament begins, it is important that you begin to stock up on Berkley products as soon as possible.