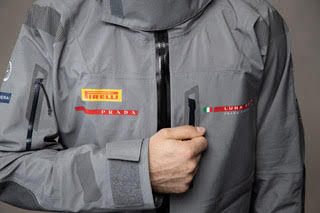 Burnaby, BC – Mustang Survival®, the Canadian brand known for innovative solutions for the most demanding marine environments, is excited to announce that it will supply equipment for extreme offshore activities of the Luna Rossa Prada Pirelli Team, as it challenges for the 36th Americas Cup.

This project highlights the strong bond between heritage and innovation on both sides. Mustang Survival has been providing confidence to sailors for over 50 years and continues to push the boundaries on innovation in the Maritime environment. The America’s Cup, now in its 36th edition, is the oldest trophy in the history of sport and 170 years later still sees the participation of the most technologically advanced boats in the world.

The Mustang Survival gear will integrate the official team uniform with four items designed for activities in extreme offshore conditions. The Mustang foul weather apparel, developed and built at its Burnaby Waterlife Studio, will include the EP 6.5 Ocean Racing Jacket, Smock, Salopette & Drysuit, all of which made from military grade GORE-TEX®

“Mustang Survival provides guaranteed protection against the elements at 50 knots, ensuring each one of us can focus on doing our job to the best of our ability day after day” said team member Shannon Falcone. “With over 40 team members on the water when supporting the AC75 training sessions, maximizing the collective efficiency means we can focus on our goal of winning the America’s Cup. I look forward to taking on this challenge together!”

“We are honored to add value to such a respected team in what is a very competitive arena. We stand behind our product and are confident the team will be protected in the toughest of conditions. This will allow them to focus on their task at hand, training to compete in their 6th America’s Cup. We are excited to be part of that journey – Jason Leggett, President Mustang Survival.

The city of Cagliari will give way to the first regattas from 23rd-26th April 2020, hosting the opening stage of the America’s World Cup Series. Additional ACWS regattas will take place in Portsmouth, England, from 4th-7th June and will end in Auckland, New Zealand, from 17th-20th December. The Prada Cup Challenger Selection Series is scheduled in Auckland in early 2021 and will determine the team who will face the Defender in the 36th America’s Cup presented by Prada. The match for the Auld Mug is set to take place from 6th-21st March 2021 in the Hauraki Gulf, Auckland, NZ.

Established in 1967 by Irv Davies, the inventor of the world’s first Floater™ Coat, Mustang Survival has been designing and manufacturing lifesaving solutions for more than 50 years. Through constant innovation and inspired technical solutions, Mustang Survival strives to bolster performance, encourage exploration and inspire adventure in the marine environment. We are committed to the protection and enhancement of those who push themselves to extremes whether for work, duty, or to escape the daily grind. Headquartered in Burnaby, BC, Canada, Mustang Survival has more than 250 associates across the US and Canada. For more information, please visitwww.mustangsurvival.com