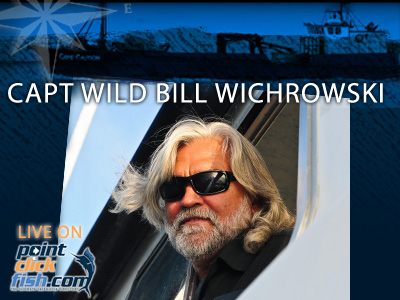 Make sure you join us and learn about Captain Wild Bill’s latest adventure, sportfishing tournaments/trips, NASCAR connection and call in to speak to him LIVE!

Captain Wild Bill’s motto is “hard work and honesty,” though he has been known to use unconventional methods – that would partly explain the nickname “Wild” – to keep his crew going strong.

While he has a potentially intimidating reputation, Bill can back up his words with the skills to get the job done. He has extensive experience as a naval engineer, boat electrician, and commercial fisherman. He is keenly aware of the risk inherent in his profession, one widely recognized as the world’s most dangerous job.

Discovery Channel producers first approached Bill to join Deadliest Catch early in the show’s run, but he declined. When interest in high-end fishing expeditions began to slow due to the economy, he decided to take Discovery up on their offer and return to crab fishing.
Click here to join the show:  Monday December 17th @ 8PM EST
PointClickFish.com welcomes Captain Wild Bill Wichrowski
Call in LIVE during the show and talk to Captain Wild Bill – (347) 884-9117