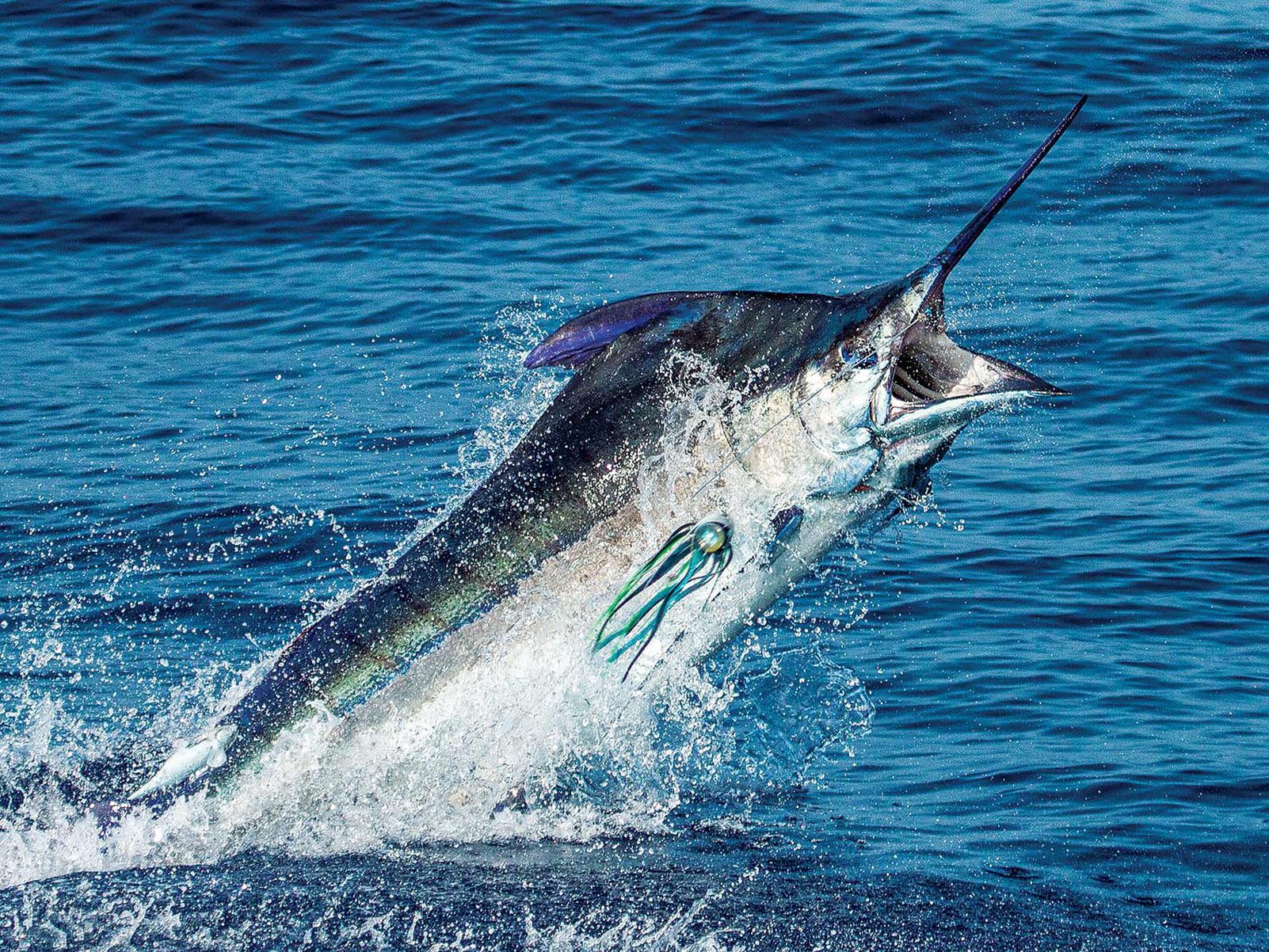 There are many great features that have made the Hawaiian International Billfish Tournament unique for so many years. The two most incredible facts: The event has been going strong for 60 years, and its original founder—Peter Fithian—remains at the helm. Here’s a look at the rich fabric of this popular international tournament.

In 1955, Fithian arrived in Kona, Hawaii, fresh from his previous job managing the Augusta National Golf Club in Georgia. He had applied for the position of manager at the famous, historic Kona Inn; with his experience in hotel management, he landed the job.

One of the first interesting sights Fithian noticed once he settled into the new job was that most afternoons out in front of the hotel, a group of men would drag a very large marlin across the lawn and weigh it from a coconut tree.

The other noticeable highlight of this idyllic seaside location was the flat-calm sea, always lapping peacefully on the nearby rocks.

Looking at the smooth sea conditions every day and talking to the local fishermen and boat owners weighing their marlin, the idea of staging a fishing tournament soon entered Fithian’s mind. He had experience with running golf tournaments, so he organized a group of fishermen to meet in his office one day to discuss launching such an event. One of those included in that meeting was the legendary Henry Chee, who was inducted into the International Game Fish Association’s Fishing Hall of Fame in 2008.

Fithian drew up some basic rules, and the IGFA regulations would serve as the tournament guidelines. To make the event an international affair, he sent invitations to fishing clubs in New Zealand and Australia; and in 1959, the Hawaiian International Billfish Tournament was launched. The event started off nicely when local angler George Wooller captured an IGFA world-record Pacific blue marlin weighing 444 pounds on 80-pound-test line. A larger blue—caught on 130-pound-class tackle and weighing 611 pounds—won the tournament for the Ala Moana Fishing Club, based in Hawaii. Score one for the home team.

The following year, there was much more interest from local and international teams, and lady angler Pat Peacock broke the IGFA 130-pound-test world record with a 540-pound blue marlin. In 1962, she claimed another world record on 130-pound-test line with a 721-pound black marlin, which back then was called a silver marlin. In 1964, the Bay of Islands Swordfish Club from New Zealand became the first international team to win the HIBT.

By now, the worldwide gamefishing community was taking notice of the outstanding calm-water fishing along the Kona coast. The big blue marlin were there—and in good numbers too. World records tumbled again, and in 1974, the IGFA 50-pound-test record was broken during the HIBT with a 762-pound blue.

This record stood for quite a few years before it was completely blown away in 1986 when Gil Kraemer of the Laguna Niguel Billfish Club boated a grander blue marlin weighing 1,062.5 pounds in the tournament.

At the time, everyone thought this incredible world-record blue, caught on just 50-pound-class tackle, would never be broken. However, in 1993, Ray Hawkes of the Balboa Angling Club captured a 1,166-pound monster blue on 50 in the HIBT’s Pro-Am preliminary event—a staggering record that still stands today as a testament to the outstanding fishing to be had in Kona.

My first trip to cover the HIBT for the media was in 1992; the following year, I was there to witness the capture and weigh-in of Hawkes’ record fish. That same year, my own Port Hacking Game Fishing Club from Sydney, Australia, won the big tournament. Those years through the 1990s witnessed an incredible number of anglers fishing the HIBT as the event’s international popularity continued to grow.

More than 60 teams participated in the 1994 event, and the tournament’s organizers had to bring in additional fishing vessels from Maui and Honolulu to accommodate all the anglers.

By the turn of the century, the HIBT and billfishing along the Kona coast in general was still going strong. One of the many memorable stories from those years: In 2003, Capt. Marlin Parker on Marlin Magic lost a 1,000-pound-plus marlin right at the boat. A few years later, he gained redemption when he boated the largest blue marlin in HIBT competition for many years with a 973-pounder. It was the second-largest blue weighed in the 50-year history of the tournament, only behind Hawkes’ 1,166-pound world-record fish.

The wonderful years of making an annual migration to Kona for the HIBT slipped by fast: before we knew it, the year was 2019 and the tournament was turning 60.

This milestone anniversary attracted many of the veterans who had been fishing it for years, or even decades, as well as plenty of newcomers. Forty-one teams from all over the world participated, some from as far away as South Africa and Papua, New Guinea. For the first time, Australia fielded 12 teams and 39 anglers in the HIBT.

“The HIBT hosts many social events, where anglers can mingle and meet their fellow competitors.”

As with most tournaments, the HIBT hosts many social events, where anglers can mingle and meet their fellow competitors. There is also a unique boat draw—all teams are assigned different vessels every day—and everyone looks forward to five days of fun and fishing.

The first day was a typical calm, gloriously beautiful Kona day. Just 30 minutes after the start of fishing, lady angler Pam Basco of the Houston Big Game Fishing Club tagged and released the first blue marlin of the 2019 event, estimated at about 130 pounds.

In the first two hours, nine teams had tagged either a marlin or a spearfish, adding valuable points to the leaderboard. As the day went by, the father and son team of Martin and Mitchell Firestein, representing the United States and the Laguna Niguel Billfish Club, bolted into the lead by tagging four blue marlin. Fishing aboard the newly refitted 2nd Offense—formerly the 43-foot Marlin Magic—skippered by Capt. Kevin Hibbard, they also deployed a satellite tag in the biggest of the four blues they caught. A total of 27 billfish were tagged and released for the day.

The second day was another good one to be on the ocean. And while the numbers of blue marlin and spearfish tagged dipped a little, a few unusual species turned up. It’s not often that striped marlin or sailfish are caught during the HIBT, but two of each species were tagged and released by competing teams. Schools of big ahi—yellowfin tuna—also were spotted jumping around the FADs and bait schools; four lucky anglers managed to hook up and boat one big tuna each—the largest weighing 120 pounds.

During the tournament’s third day, a French team from the Pacific island of New Caledonia, fishing on Northern Lights II with Capt. Kevin Nakamaru, hooked the first solid blue marlin of the tournament. Team captain and angler Alain Destours made the call to boat the fish. At 429 pounds, it turned out to be the heaviest weighed for the week.

The same French team had tagged two other blue marlin as well—but they were still running in fourth place behind the Firesteins, who had extended their lead on Day Three by tagging another blue and boating a 129.9-pound tuna.

Going into the second-to-last day, the leaderboard showed the competition was still very close, and the Firestein team was in the lead by a mere 50 points. The U.S. team from the Pajaro Valley Fishing Club—Rocky Franich, Bill Evans, Tony Campos, Steven Kegley, and the famous lure-maker Joe Yee—had an incredible day. Fishing on the 37-foot Merritt, Benchmark, with Capt. Chris Donato, they tagged and released four blue marlin and a spearfish, putting themselves right up among the leaders. Franich has fished in the HIBT an incredible 57 times, and the 92-year-old Yee also still competes.

But the Olympian Dream Fishing Club team from Japan was the one to watch, because it had been releasing a marlin every day and was only 50 points behind the leaders. The Kona Gamefish Club-Bluefin team, also from Japan, were only 100 points behind in third place. The last day was going to go right down to the wire.

In an amazing start to the final day of competition, the leading Laguna Niguel Club-Firestein team tagged and released a shortbill spearfish to add another 100 points to its slim lead. As it turned out, the two Japanese teams weren’t able to add any points to their totals on that critical final day of fishing—one tagged marlin for either of these two teams would have given it the coveted Governor’s Trophy.

“Right from the start it was nerve-racking. Every time the radio lit up, we were both like, ‘Who is that and what did they catch?’”

Instead, it was the Firesteins of the United States in first place with 1,600 points. Mitchell, who has been fishing the HIBT with his father since he was just 7 years old, was understandably elated. “Right from the start [of the last day], it was nerve-racking. Every time the radio lit up, we were both like, ‘Who is that and what did they catch?’” he says. “In the last hour, we both knew we had no control over this. It is what it is, but today worked out. We are so happy to win here in Kona.”

The Olympian Dream Fishing Club came in second with 1,450 points. The Flying Fijians from Denarau Game and Sportfishing Club placed third with 1,450 points; Kona Gamefish Club-Bluefin was fourth with 1,400 points and the Ohana Marlin Club, also from Japan, rounded out the top five teams with 1,250 points.

Hibbard of the 2nd Offense won the Henry Chee Memorial Award, which was established in 1965 to recognize the charter boat captain with the highest point total in HIBT history. He and his crewmen, Brandon Wilder and OB Morten, tallied 1,800 points. Nakamaru finished second on Northern Lights II with 1,774.5 pounds, and Foxy Lady’s Capt. Boyd DeCoito was third with 1,600 points.

As the sun set on the 60th anniversary of the HIBT, a collection of veterans and HIBT newcomers gathered to celebrate one of the world’s finest sport-fishing institutions, looking forward to the future of marlin fishing off Kona’s peaceful shores.