Mary Lee is headed up the bluewater highway North. Is she headed to VA Beach? 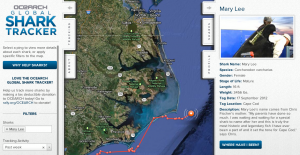 [divider] It appears everyone is enjoying tracking  Mary Lee and the sharks of  the OCEARCH team!  One particular shark has been traveling the eastern seaboard and has captured the attention of many becuase of her close encounters with the coast! Her name is Mary Lee. Mary Lee is approximately 16ft in length, 3,500 lbs. and is a mature great white shark. Mary Lee was tagged off the coast of Cape Cod in September of 2012.

The OCEARCH Global Shark Tracker uses data from sharks tagged with satellite tracking technology and posts information about where the sharks “ping” on its website.

So who is OCEARCH?
OCEARCH facilitates unprecedented research by supporting leading researchers and institutions seeking to attain groundbreaking data on the biology and health of sharks, in conjunction with basic research on shark life history and migration. The researchers we support work aboard the M/V OCEARCH, a unique 126’ vessel equipped with a custom 75,000 hydraulic lift and research platform, which serves as both mothership and at-sea laboratory.

OCEARCH fieldwork involves the attracting, catching, tagging, and bio-sampling of sharks before they are released. The shark is monitored at all times under expert guidance and maintained on the platform by water over its gills. All fieldwork is done according to agreed and approved protocols based primarily on ethical considerations, and overseen by leading scientists/researchers. 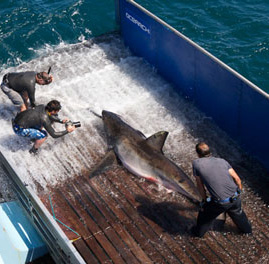