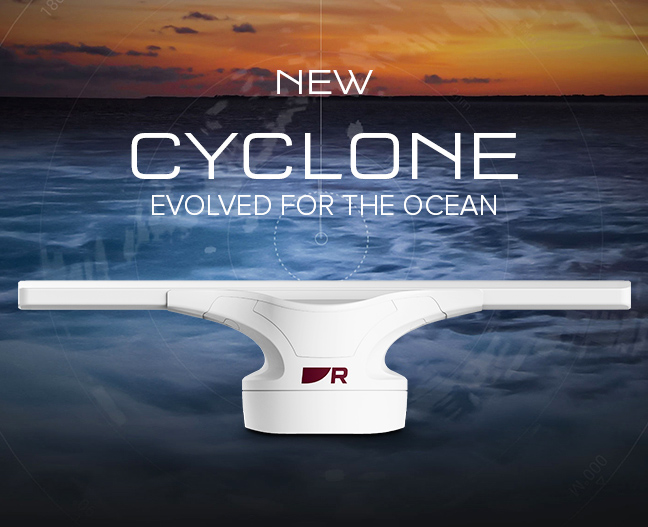 Striking form, extreme capability, and ruggedness are the hallmarks of this next-generation open-array radar
Nashua NH (October 26th, 2021) – Raymarine announces Cyclone™, the newest range of open-array radars, conceived and crafted to give mariners the confidence to tackle the harshest conditions, gain distinct advantages in the hunt for fish, and safely navigate busy waterways. All-new Cyclone radars are available in 3-, 4- and 6-foot arrays and two high-power output options for each size. Each model features innovative detection technologies, including Cyclone Bird Mode, that elevates Cyclone into a class all its own. 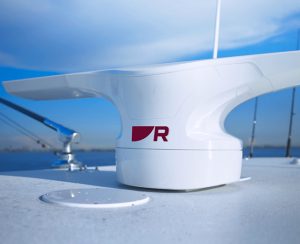 Maximum Capability and Awareness at Any Speed

Cyclone is engineered for extremes with a best-in-class wind rating of over 100 knots. A fast 60-RPM rotational speed delivers 360-degrees of awareness and accurate tracking of up to 100 distinct ARPA targets in real-time, even with the vessel at full speed. Precision radar imaging comes courtesy of CHIRP pulse compression and beam-sharpening technology for best-in-class target separation and long-range resolution.  With Cyclone, boaters can simultaneously enjoy maximum visibility of near and distant targets using Raymarine’s RangeFusion™ technology.  RangeFusion technology merges short-pulse near-target ranges with long-pulse, distant target ranges, providing a single radar image that is easier to interpret.

When it’s time to find fish and get to them fast, Cyclone’s Bird Mode identifies distant flocks of sea birds above baitfish schools.   Bird mode intelligently optimizes radar gain and sea clutter controls for targeting seabirds, giving anglers the intelligence they need to locate baitfish and their trophy predators.

“Radars are a well-established fundamental to a captain’s awareness while on the water, but we wanted to push the boundaries on what was possible for such an important system component.  When developing Cyclone, we challenged ourselves to create a radar that combines both beauty and high performance,” says Gregoire Outters, General Manager for the Raymarine brand at Teledyne FLIR. “And we met this challenge with a groundbreaking design, rugged performance, and unmatched radar imagery.  With Cyclone, we are disrupting the radar category and giving boaters an entirely new level of situational awareness on the water.” 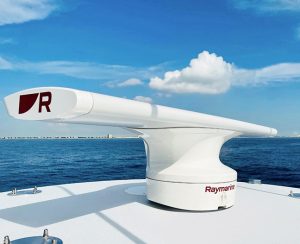 Cyclone is being unveiled and demonstrated during the Fort Lauderdale International Boat Show, October 27-31, and will be available at Raymarine dealers worldwide beginning in November 2021.

Learn more about Raymarine Cyclone by visiting www.raymarine.com/cyclone. High-resolution images are available for download at https://flir.box.com/v/Raymarine-Cyclone.