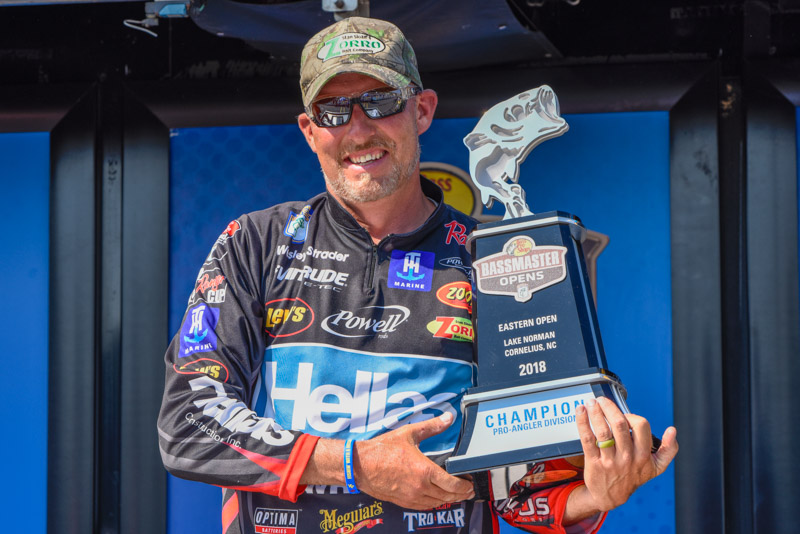 On Monday, while other contestants in the Bass Pro Shops Bassmaster Open at Lake Norman, North Carolina, were enjoying their first day of official practice, Wesley Strader was putting the finishing touches on his first Elite Series victory in the Berkley Bassmaster Elite at Kentucky Lake presented by Abu Garcia. Six days later, Strader added the second of his back-to-back B.A.S.S. victories by winning the Eastern Open at Norman.

“The last two weeks have been unbelievable,” Strader said. “At the beginning of the year I was not sure if I had made the right decision to switch (tournament organizations).

“What I want to tell everyone is if your gut tells you to do something, do it.”

Strader did that. Though he was two bass short of a five-bass tournament limit on the final day, with only 8 pounds, 13 ounces, it provided him with a three-day total of 40-0. This was enough to give Strader his third B.A.S.S. victory.

“People talk about ‘fishing in the moment,’ and I did that. I don’t know how to describe it,” Strader said. “I have picked up the right bait, at the right time, in the right situations these last two weeks.

“I hope I can ride that lightning bolt the rest of the season,” he said. “But you can only ride these (streaks) out until they quit, and hope for another one.”

Unusually high, muddy water, below the Lookout Shoals Dam, allowed Strader to employ a tactic that he has used his entire life — fishing a dam’s tailrace with a spinnerbait and swimbait.

“I was super surprised to see that the water was as muddy as it was,” Strader said. “I fished current seams, just like I have for years on the Tennessee River.

“After catching a 6-pound bass there in practice, I knew that’s where I was going, all three days.”

Along with the first place prize of a Triton TrX 19 powered by a Mercury 200 Pro XS, Strader won the Power-Pole Captain’s Cash Award of $500 for being the highest-placing angler who is registered and eligible and uses a client-approved product on his boat. He also qualified for the 2018 Bass Pro Shops Bassmaster Opens Championship, Oct. 18-20, at a location to be announced later.

“If I would’ve known how tough the fishing was today — on everyone — I may have finessed some of the larger bass that I was able to see,” said Lintner. “The fish I targeted this week were not on beds, and they weren’t on specific structure, they were just swimming … where I could see them.”

Lintner used a Jackall Mikey wakebait early in the morning and a discontinued “large” S-Flat swimbait by Evergreen Lures as a search bait.

“(The swimbait) would draw the fish away from the docks or whatever structure the bass were holding to,” Lintner said. “If they didn’t eat it, I would turn around with a Jackall 5.8 inch Neko Flick worm in Prism Gill color, wacky-style, and try to catch them.”

In third place Sam George of Athens, Ala., weighed 10-12 during the final round. His final day limit gave him a total of 35-0.

“With the lead Strader had going into today, I knew I had to catch them,” George said. “So, I went and got a limit of spotted bass early, so I could settle in and run new water.”

George caught his early limit of spotted bass in a brushpile that postspawn spotted bass were “moving to.” He fished for largemouth around spawning bluegill the remainder of the day.

Will Evans of Winter Haven, Fla., finished fourth with 34-7, and Garrett Paquette of Canton, Mich., finished in fifth place with 33-9.

After finishing in the Top 12 seven of the previous nine B.A.S.S. events, Chad Smith of Minnetonka, Minn., won the co-angler division by catching a three-bass limit of 5-9 to finish with 19-5. Smith won a Triton TrX 179 powered by a Mercury 115ELPT Four Stroke motor valued at $27,000.

The eight winners from each tournament in the Eastern and Central Opens divisions will qualify for the Opens Championship. The Top 10 anglers in the point standings from each division will also compete in the championship.

The 28 championship competitors will contend for berths in the 2019 Bassmaster Elite Series and Bassmaster Classic presented by DICK’S Sporting Goods.