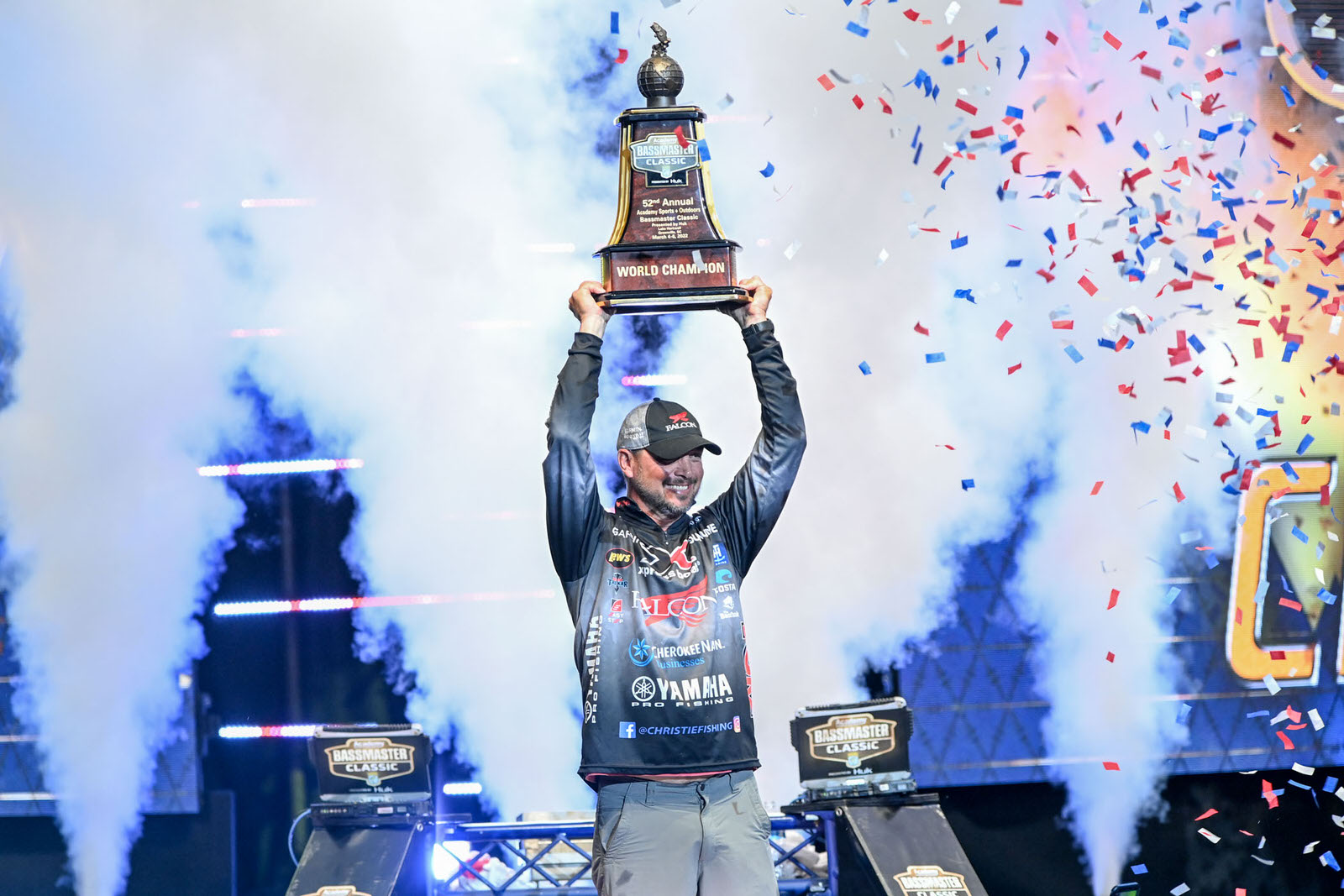 For years, Jason Christie has had to live with the crushing weight of leading pro fishing’s biggest event twice on the final day, only to fall short.

The 48-year-old pro from Park Hill, Okla., led once again going into Championship Sunday and this time sealed the deal in dramatic fashion with a final-day limit of 17 pounds, 9 ounces that made him the champion of the 52nd Academy Sports + Outdoors Bassmaster Classic presented by Huk at Lake Hartwell. His three-day total of 54-0 was only 5 ounces better than that of second-place finisher Kyle Welcher, who shared the lead with Christie going into the final day.

“Honestly, when I was sitting at the door waiting to come in and weigh my fish, I thought I had given it away again,” said Christie, who pushed his career earnings with B.A.S.S. to $1,668,011 with the $300,000 victory. “Stetson Blaylock had just weighed in a big bag, and Kyle Welcher used to be a professional poker player, so I knew he had more than what he was saying.

“I knew it was gonna be close. I honestly thought there could be a tie, and that was scary for me because I didn’t have any fish left.”

Christie certainly found plenty of fish throughout the week as he alternated between deep- and shallow-water patterns that were about as different as two techniques can be.

He caught half of his weight targeting bass on Garmin LiveScope in a 15- to 30-foot drain that he said held “hundreds of fish” the first two days. He used a spinning rod with a 3/16-ounce jighead and a prototype lure from Yum that only this week earned an official name, the FF Sonar Minnow, which stands for “Forward Facing Sonar Minnow.”

“It’s a bait that I can cast to the fish and work the rod and keep it on him; the bait does not move forward,” Christie said. “It’s a technique that I’ve been working on for about five years now.

“A lot of times you throw a swimbait over the top of them and they’ll just trail it. But you can drop this bait right to the fish and keep it on top of him.”

The drain was good to Christie the first two days. But when he arrived there early on Sunday, he found what he described as a “ghost town.” A spot that had produced half of his weigh-in fish during the week produced only one on the final day — and even though it was his biggest bass of the day, a 4-11 largemouth, he admittedly started thinking, “Here we go again.”

Known as one of the best power-fishermen in the world, Christie utilized a 5/8-ounce War Eagle Jiu-Jigsu Jig with a Yum Craw Chunk in green pumpkin/purple. He used a green pumpkin/orange jig until the final day when he switched to straight green pumpkin because he “banged all of the other ones off docks” until they were unusable.

“It’s just a heavier jig,” Christie said. “I was fishing a foot to 3 feet and people think you need a smaller jig in that situation. But when the water is clear, I want it to go fast.”

He fished the setup on a 7-4 Falcon Rods Jason Christie Flipping Stick with a Lew’s Pro SP reel spooled with 20-pound Sunline Shooter. He keyed on the shallowest parts of boat docks where bass were likely preparing to spawn.

“If it was touching the bank, it was high-percentage,” he said. “That’s what they usually do right before they spawn. They’ll get up there as close to the bank as they can, and then they’ll build their bed out in the sunlight a couple of feet away.”

Besides carrying the weight of past near misses in the Classic, Christie said he also had to fight the urge to rely on the lure he’s known most for — the spinnerbait. Despite some limited success with it during practice, he said the small amount of stained water that was available wasn’t dark enough for his liking.

He also knew the areas would likely be crowded all week.

“I fought the demons here as far as where I’ve won in the past,” said Christie, an Xpress Boats pro who became the first angler to win the Classic in an aluminum boat. “I wanted to go into a pocket with dirty water and throw a spinnerbait, and I caught a 6-pounder doing that in practice. That fish was trying to lure me in, but I put the spinnerbait away and said, ‘This tournament can’t be won on a spinnerbait.’

Good decisions like that mean he’ll no longer have to hear the questions that have dogged him since he finished second at Grand Lake in the 2016 Classic and third at Hartwell in 2018.

“No mas,” Christie said with a grin. “Every event that I’ve ever won came when I least expected it. I cannot believe I won with the amount of fish I had found.

As a member of the Yamaha Power Pay program, Christie is bringing home an additional $20,000.

South Carolina pro Brandon Cobb earned $2,500 for overall Berkley Big Bass of the Week with the 6-12 largemouth he caught on Day 2.

South Carolina pro Bryan New earned the $1,000 BassTrakk contingency for the closest estimate of his weight throughout the first two days of the event.

The Bassmaster Classic was hosted by Visit Anderson and VisitGreenvilleSC.