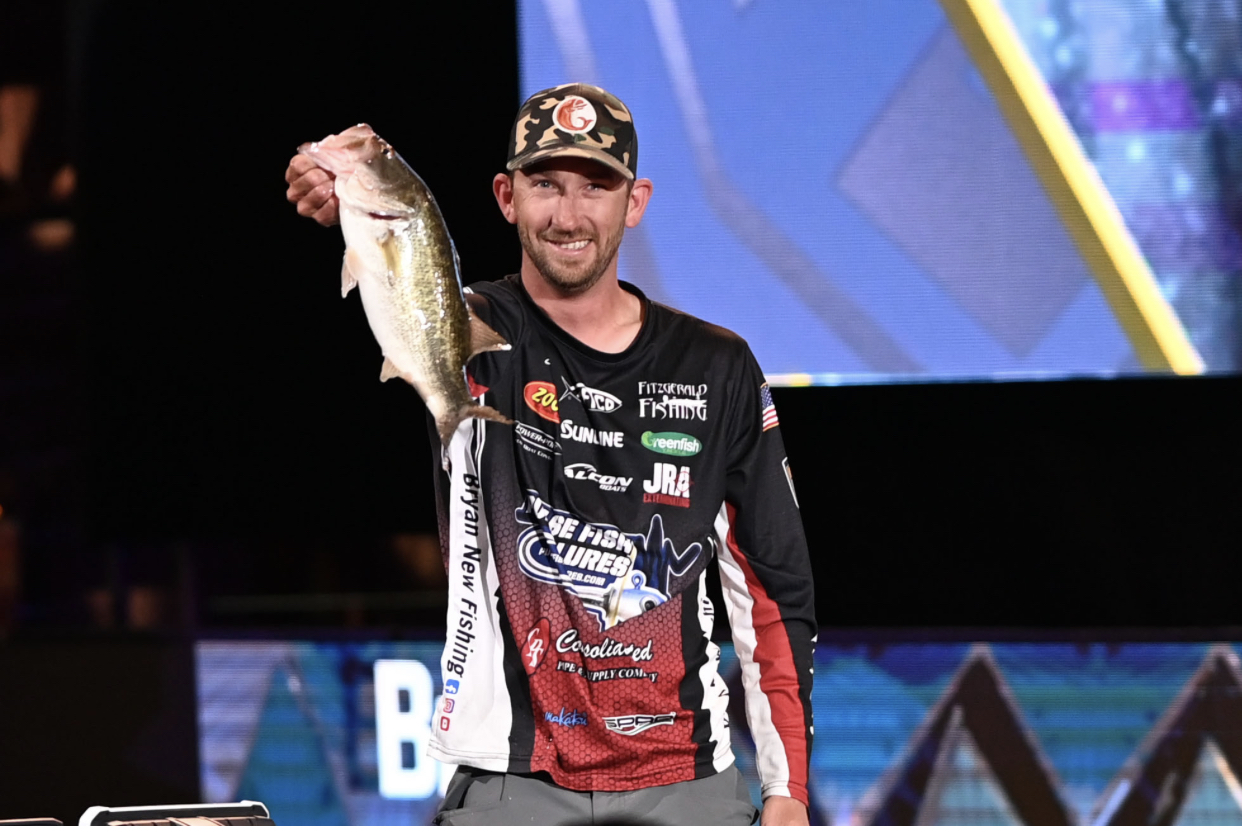 As it turns out, competing in professional bass fishing’s biggest event is quite a bit easier with two good arms.

After struggling through last year’s world championship with a broken right wrist, a healthy Bryan New weighed in five bass Friday for 20 pounds to take the first-round lead in the Academy Sports + Outdoors Bassmaster Classic presented by Huk on Lake Hartwell.

“Honestly, I feel like this is my first Classic,” said New, who suffered the broken wrist during practice for last year’s Classic on Lake Ray Roberts in Texas. “I’m not saying I would have won last year if I had two hands. But I’m a natural right-hander, so trying to learn how to reel left-handed at the Classic wasn’t a good situation.”

New targeted boat docks Friday to catch five bass that were all in the 3 1/2- to 5-pound range. He was tight-lipped about his baits and presentations, saying only that he’s using a combination of “slow-moving baits and fast-moving reaction baits.”

But he said all the bass he weighed came off boat docks — and since that’s easily his favorite structure to fish, he plans to stick with them as long as he can.

“I think there’s a really good chance this tournament could be won fishing boat docks,” said New, who holds career victories on the St. Croix Bassmaster Opens presented by Mossy Oak Fishing circuit and the Bassmaster Elite Series. “I probably fished a hundred docks today and really caught them off six or seven.

“Those docks may replenish or they may not, but there are plenty of docks on this lake. It’s not like you’re gonna run out.”

While he plans to start right back on his dock pattern Saturday, New knows there could be a time when he has to catch a fish around some other type of structure before the tournament is done.

“At some point in the tournament, I’ll have to mix in some other stuff,” he said. “Maybe not tomorrow, but then again maybe tomorrow.

“It’s not something I want to do. I caught my very first bass around a boat dock — and as of right now, the very last one.”

Welcher was even more tight-lipped about how he caught his bass, saying only that he expected more fish to be moving shallow with the weather as warm as it’s been.

Putting almost 19 pounds in the livewell Friday reminded him of one solid day he had during practice. But he said he also had days when he only got a handful of bites and it was hard to catch even a 3-pounder.

“The bass can literally be anywhere here,” Welcher said. “The difference between catching a 1 1/4-pounder or catching a 4-pounder can be just a few casts. It’s a really fine line between bringing in 12 pounds and bringing in 20.

“I’m just gonna try to get as many bites as I can and hope they weigh a lot.”

Like New, Kennedy spent time targeting docks and managed to land the Berkley Big Bass of the day — a 6-7 largemouth — around one after whiffing on the fish the first time it bit. He wouldn’t say which bait the big bass missed. But after resisting the urge to cast back to it, he came back almost an hour later and landed the fish on a wacky-rigged Senko.

“I saw the fish come up and inhale the bait the first time it bit, and I didn’t even nick it,” Kennedy said. “It’s just hard when you see it all happen in front of you. I didn’t hammer it to death with that same bait. I just circled back around to it later and caught it on that Senko.”

Kennedy said he saw bass all day on his electronics, but getting them to bite in superclear water was tough. While he caught 15 bass, he said he could have caught a lot more.

“I felt like it was just a terrible day of execution,” Kennedy said. “I lost a 5-pounder that I had hooked up. I missed that 6-7 the first time it bit.

“I just always say if I catch the bites I get, I’ll be in the hunt. I didn’t do it completely today.”

Hackney said he spent his day “junk fishing,” meaning he did a little bit of everything — largely because he couldn’t dial in a single pattern that produced all day. His bag included a 5-pound largemouth and a 4-pound spotted bass.

“It was hard for me to get bites,” Hackney said. “I chose the area I’m fishing because I can fish for one species and turn around [and] fish for the other.

“The spots have gotten bigger on this lake — and a 4-pounder is a 4-pounder.”

The tournament resumes Saturday with takeoff at 7 a.m. ET from Green Pond Landing and Event Center. After Saturday’s weigh-in, only the Top 25 anglers will advance to Championship Sunday with a $300,000 first-place prize and the most coveted trophy in the sport on the line.

The annual Bassmaster Classic Outdoors Expo presented by Marathon will be held at the Greenville Convention Center with exhibitors on-site selling a variety of merchandise for fishing, hunting, camping and more. Hours for the Expo will be 10 a.m.-6 p.m. Saturday and 10 a.m.-4 p.m. Sunday.

The Bassmaster Classic is being hosted by Visit Anderson and VisitGreenvilleSC.