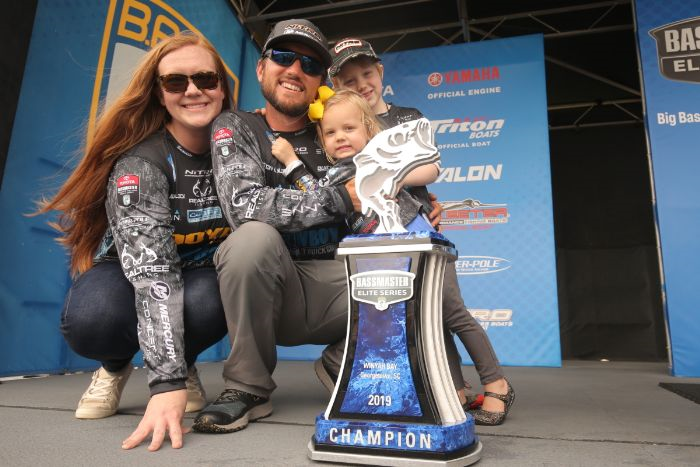 GEORGETOWN, S.C. — Stetson Blaylock came to the Bassmaster Elite at Winyah Bay with one goal in mind: don’t finish last. He accomplished that goal — and then some.

The third-year Elite Series pro from Arkansas tallied a four-day total of 50 pounds, 15 ounces and earned a victory that was unexpected, to say the least. He capped the win with a Championship Sunday limit of five bass that weighed 9-3.

“I came here with the intentions of ‘Don’t ruin your season; don’t come here and finish dead last,’” said Blaylock, who earned $100,000 for the victory. “When I found my area, I knew it had fish, so I thought I’d get out of here with a Top 35 and roll on to the next one. I didn’t know it had winning potential at all.

“I look back at every bass I lost this week and think ‘Gosh, I should’ve caught that one.’ Today, I had one good one that jumped off that would have been another 2 pounds. When that kind of stuff happens, you’re not supposed to win, but when it’s your time, you can’t do anything wrong.”

Time management was essential throughout the week. While many of his competitors ran 100-plus miles to fish various areas of the Cooper River, Blaylock earned his first blue trophy by staying in a pond off the Waccamaw River, about 18 minutes from takeoff at Georgetown’s Carroll Ashmore Campbell Marine Complex.

Lined with overhanging trees, the area held deeper water and sprouted a few tributary canals. Here, Blaylock placed 11th on Day 1 with 11-6, rose to sixth the next day with 12-7 and surged into the Day 3 lead by sacking up a limit of 17-15, the tournament’s heaviest bag.

Today, Blaylock faced a tougher bite, but his 9-3 was enough to hold off a dramatic charge by second-place angler Scott Canterbury, who finished just 9 ounces behind Blaylock.

“I’ve never been here before, so I went to where I knew there were some fish,” Blaylock said. “That gave me the entire day to fish.”

Coming off a second-place finish in last week’s Bass Pro Shops Bassmaster Elite at Lake Hartwell, Blaylock not only carried over the positive momentum, he also stuck with the same selection of lures. His primary bait was a 5-inch green pumpkin YUM Dinger stickworm with a 1/32-ounce nail weight and a Gamakatsu G-Finesse Dropshot Hook tucked under an O-ring.

Blaylock used this rig for skipping under tree limbs, a technique that accounted for most of his bites. He also caught a keeper on a P-70 Pop-R — and when he found bed fish, he pitched a white YUM Christie Craw on a 3/0 hook and a 7/16-ounce weight.

“Going out this morning with the chance to win, all day it seemed like I had given it away,” Blaylock said. “I figured I’d finish sixth or seventh with the way I lost so many and fished so poorly today. But it all comes down to those key fish you get in the box.

“Winning an event like this is everything to a fisherman. The money’s nice, but the trophy is what it’s all about.”

In second place, Canterbury’s ambitious venture was pure Bassmaster LIVE gold, as a long run up the Cooper yielded a limit of 16-2 — the day’s heaviest catch — and gave him a total weight of 50-6. Motoring well past where other competitors fished, the Alabama angler, who started the day in eighth place, made a key bait change that produced 10 pounds in two bites — a 6- and a 4-pounder — within 30 minutes.

“I went up there yesterday and I was only going to fish about an hour just to get away from everybody, because I struggled so bad the second day,” Canterbury said. “When I got up there yesterday I caught a 2-pounder and then a 5-pounder 10-minutes later, so I ended up staying in that area.

“Today, I went up there and threw the same Dirty Jigs swim jig I threw yesterday and couldn’t get them to bite it. I hadn’t thrown a buzzbait all week. But today, with muddy water and overcast weather, it just felt like a buzzbait day. I caught every one of my fish on that bait.”

Earlier in the day, Canterbury took advantage of the morning’s high water to fish around spawning areas. When the outgoing tide started draining the areas, he moved outside to the main creek channel and caught his fish on points of vegetation out of the main current.

“It’s all about making those adjustments and today, I made some good ones,” he said.

In third place, Canadian Cory Johnston also fished the Cooper River, but he focused on the expansive flats that once served as rice fields. In practice, he had marked several key areas with hydrilla clumps and isolated hard-bottom spots.

Targeting these spawning sites was his plan, but the day’s conditions were not favorable.

“The water was clear, but with cloudy skies, I couldn’t see the beds and the clear spots and that hurt me,” Johnston said. “I could get my bait in the area, but I wasn’t able to specifically throw it on a bed, so I had to blind cast.”

Johnston added a limit of 9-1 and finished with 49-5. He caught his fish on a wacky-rigged green pumpkin stickbait and a homemade swim jig with a Strike King Rage Craw trailer.

Rounding out the Top 5 were Jason Williamson with 46-3 and John Crews with 46-2.

Williamson and Crews were also the two highest finishing anglers eligible for Toyota Bonus Bucks. Williamson finished fourth and added $3,000 to his purse, while Crews finished fifth earning a $2,000 bonus.

South Carolina rookie Patrick Walters claimed the lead in both the Toyota Bassmaster Angler of the Year and the DICK`S Sporting Goods Rookie of Year race, after four events, earning $1,000 for AOY and $500 for ROY.