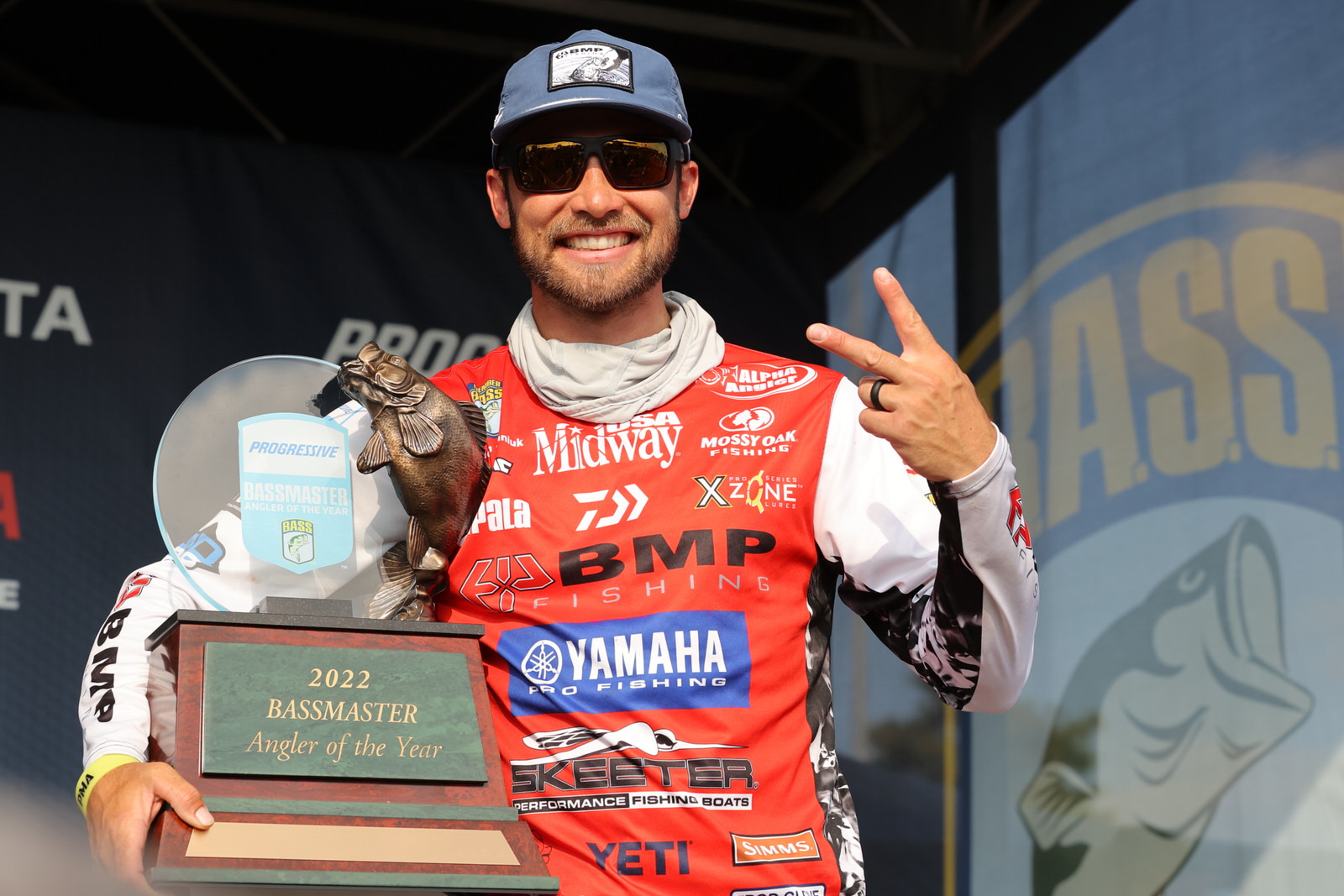 Brandon Palaniuk doesn’t think of himself as a legend. In his mind, he is still the 8-year-old from Rathdrum, Idaho, who discovered a dream of reaching the biggest stage in bass fishing.

But by winning the 2022 Progressive Insurance Bassmaster Angler of the Year race, adding yet another trophy to his mantle, “The Prodigy” is surely living up to his nickname.

With a 25th-place finish at the Guaranteed Rate Bassmaster Elite at Mississippi River with 39 pounds, 11 ounces, Palaniuk clinched the Angler of the Year title Sunday, becoming just the 12th angler to win multiple AOY trophies, with his first title coming back in 2017.

“It is amazing. It hasn’t sunk in all the way yet,” Palaniuk said. “The feeling of winning and that accomplishment, that moment and feeling when (Dave) Mercer announces it on stage, that is what makes all the hard work, the early mornings, the late nights and the hard times OK. It makes it worth it. For me, it is another piece of the puzzle of this crazy life we live, and I’m glad the pieces fell the way I wanted them to.

Palaniuk was able to begin his celebration on stage with his daughter, Kora, in his arms and his wife, Tiffanie, by his side.

“It doesn’t get any better than that. Because of them, I can do what I do. It is just as much theirs as it is mine,” he said.

After battling David Mullins and John Cox for the lead most of the year, Palaniuk entered the Mississippi River event with a 37-point lead over Brandon Lester after a disappointing showing at Lake Oahe. Lester and Chris Johnston put the pressure on Palaniuk this week, as both anglers qualified for Championship Monday.

Meanwhile, Palaniuk had just four bass in his livewell with a half hour to go on Day 2. In danger of missing the cut, Palaniuk landed his fifth keeper at around 3:30 p.m. to make the Semifinal Sunday field.

“The weight the last two weeks, I have felt like Brandon Lester was the size of a Sasquatch on my shoulders. And that is kudos to him for how good of an angler he is,” Palaniuk said. “He put the pressure on me. I hated it the last two weeks and I loved it at the same time. It made me feel alive.

“What blows my mind is that AOY was literally decided by one bass. One bass yesterday I caught at 3:30 gave me a limit and without that, I don’t win AOY. That is why you fish until the very end. I always say I have won more tournaments on my last cast than the first cast.”

He left no doubt on Semifinal Sunday as to who would be hoisting the AOY trophy, landing a limit in the first 15 minutes of the day to seal the deal.

“Oahe, I felt, sucked the soul out of my body,” Palaniuk said. “Yesterday was a mental test for me, and I felt like today was the reward for passing that test yesterday. I had 13 pounds in the first hour and was able to enjoy the day. I didn’t feel stressed. I had fun catching bass again, and that is exactly why I started. Never forget, fishing is fun.”

It was a season that started soon after the passing of the legendary Aaron Martens, but throughout the year Palaniuk felt Martens was helping him with the roller-coaster ride that is an Elite Series season.

“The first tournament of the year I slapped an Aaron Martens sticker on my windshield. There were a lot of times it got really tough this year, and I turned around and looked at that sticker. I felt like he was looking back at me and saying, ‘I love you, bro.’ It helped every time,” Palaniuk said. “This whole week I would slap that sticker or give him (a fist bump) to say ‘thank you’ for everything he has done.”

Other than the Santee Cooper Lakes event, Palaniuk did not have good practices. But each practice gave him one clue that he ran with during the tournament.

“Outside of Santee Cooper, I felt like my entire year was made up on the fly,” he explained. “It was a complete scramble from getting little clues in practice and running with them in the event and turning those subpar practices into really good events. You have to think of fishing as a math equation. You have all these variables and you put them into an equation, and whatever that equals is the answer to catching your bass.

“The more time you spend on the water and see those sets of variables, the faster the light bulb goes off. That’s how I fished my entire season. (I was) living on the edge of disaster and made it work.”

Getting off to a good start was one of the most important aspects of his season. Historically, Florida has not been kind to Palaniuk, so once he made it through both of those events unscathed, he realized his season could turn into one to remember.

“Florida has been my nemesis,” he said. “When I came out of there with a 20th and a 26th, I knew I had gotten that monkey off my back and there was potential. The last time I won AOY, I finished 105th at Okeechobee and had to fight my way back. To me, I felt like I was starting way ahead of the game compared to where I normally do.”

His only missed cut came at Lake Oahe, and the tournament set the tone for a stressful week at La Crosse the following week. But it was the Pickwick tournament, an event where Palaniuk and Tiffanie were expecting the birth of Kora at any time, that may have tested him the most.

“I gained a new level of respect and appreciation for Tiff,” he said. “How tough she was in the biggest moment of our lives. For her to be that strong and still be that supportive (of the fact) I still had that tournament to fish. And the fact that I was able to not only practice all week (but was also able to) fish all four days of the event made me feel like there was something outside of our control that was making this season happen.

“It was incredible we were able to complete that week. Realistically, I’m assuming if I don’t fish all four days there I don’t win AOY.”

With his videographer Kyle Vandever there for every tournament, Palaniuk has every aspect of the season on video and he is excited to, one day, share the memories of this season with Kora.

“It is going to be incredible to show my daughter when she is old enough to understand what this season looked like,” he said. “We documented the entire thing and have every fish catch on video. It is cool to have all of that and at some point, be able to use that as a teaching lesson for her.”