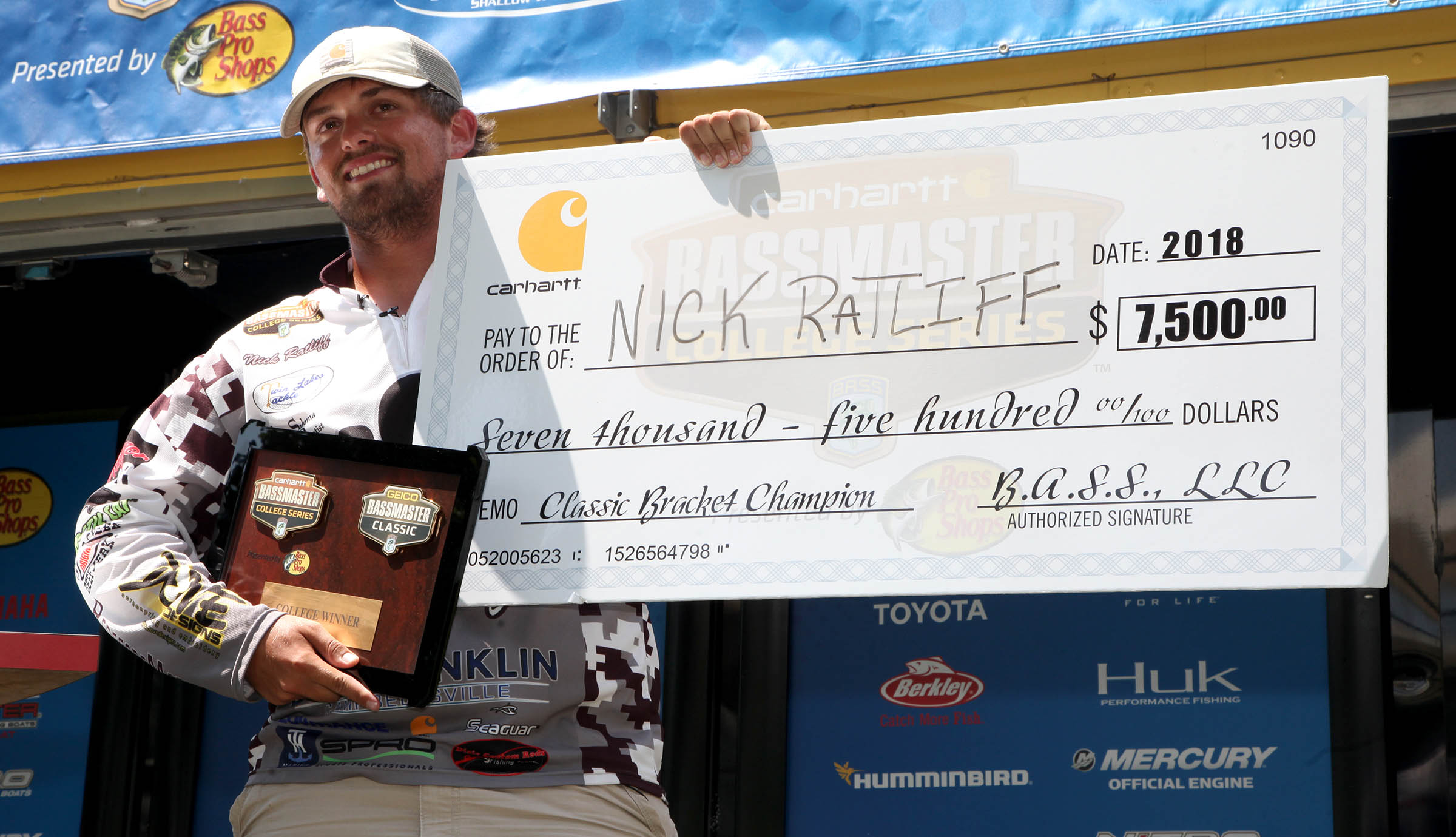 A storm rolled in and the lighting struck not twice but three times as two college anglers put on the kind of show in a bracket finale that would even make Mother Nature nervous.

Nick Ratliff, 21, of Elizabethtown, Ky., a senior at Campbellsville University, pulled lightning out of his pocket, twice, to punch his ticket to the 2019 Bassmaster Classic presented by DICK’S Sporting Goods in a crazy 2018 Carhartt Bassmaster College Series Classic Bracket presented by Bass Pro Shops.

Ratliff fought down to the final minutes of the third day in an oh-so-close bracket against a scrappy West Virginia University junior, Nolan Minor of Charlottesville, Va., who rolled out a lightning strike of his own.

The anglers wrapped up the day with the two biggest bags of the tournament; Ratliff with 13 pounds, 8 ounces and Minor with 13-4.

Ratliff not only landed the biggest bag of the contest and a berth in the 2019 Bassmaster Classic March 15-17 on the Tennessee River at Knoxville, but he also earned a fully-rigged Toyota Tundra, a Nitro Z20 bass boat and a $7,500 tournament stipend courtesy of Carhartt.

Ratliff, who is majoring in business administration with an emphasis in marketing, started off with his first strike immediately after the launch with back-to-back 2-plus-pound smallmouth bass. He appeared to have a nearly insurmountable advantage at the first break and reveal, which came an hour early as a passing storm with lightning forced the anglers back to a covered dock.

He had posted five fish the first two hours for 9 pounds, 11 ounces using a wacky-rigged Senko stickworm in green pumpkin. He had weighed in the heaviest bag of the tournament on Day 1, a 12-13 limit, and followed that with 11-0 to advance to the finale.

Minor, a wildlife and fisheries major, seemed like a major underdog at the break with only one keeper to his name at 13 ounces.

While Minor had advanced in his bracket challenges, his first two bags, at 7-15 on Day 1 and 10-8 on Day 2, were not as impressive as Ratliff’s totals.

Minor acknowledge the shortfall, and at the time said he knew that Ratliff had been wishing for calm, clear conditions all week, and those conditions appeared after the storm cleared. He assumed his competitor was onto a good bite that would continue.

But Minor made a strike of his own while Ratliff’s pattern seemed to fade.

He ran to a shallow, rocky ledge on the main lake that sloped out to about 7 feet deep and fell off to more than 20. The place was so thick with shad it looked like it was still raining on the smooth water. He tried the surface baits for a few casts before breaking out a football-head jig. Within 25 minutes, he had not only covered the gap but eclipsed Ratliff’s lead. In less than an hour he had culled up to 13 pounds with at least 10 more keepers.

“I had the feeling I was behind,” he said. “I kept my head down, and I knew if the Lord meant it to be, then it would be.”

With just 30 minutes left in fishing time, lightning struck for the final time and three more fish allowed him to cull up to his winning 13-8.

Like anyone struck by lightning, Ratliff was emotional and stunned as family and friends hugged and congratulated him.

“It hasn’t sunk in yet,” he said of the win and the Classic berth. “It was so close. I thought I’d lost. I really did.”