Home Freshwater Tournaments BASS Tournaments Gustafson Struggles On Day 3, But Holds On To Lead At Bassmaster... 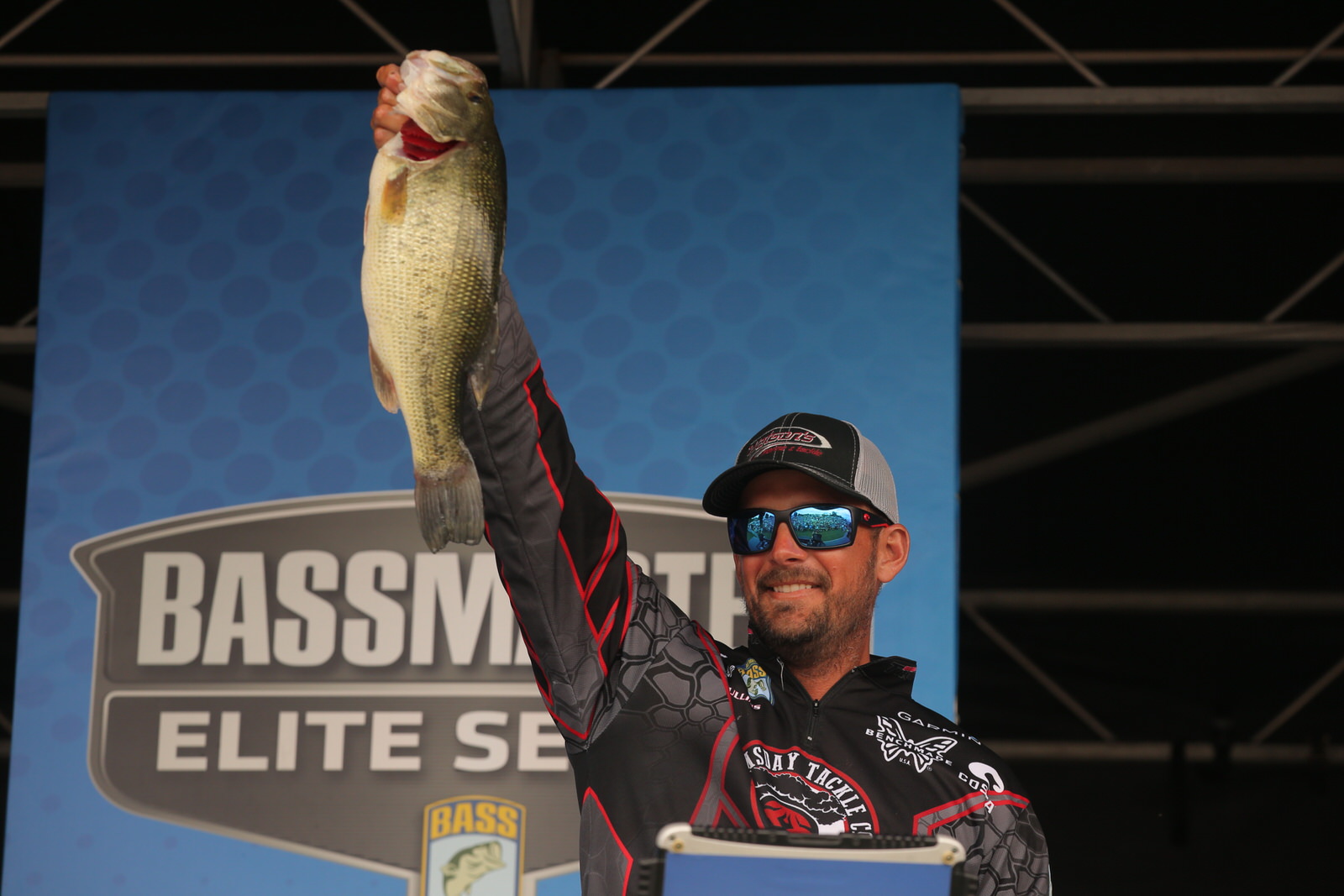 Share
Facebook
Twitter
Email
Pinterest
UNION SPRINGS, N.Y. —As Jeff Gustafson struggled through a difficult Saturday at the SiteOne Bassmaster Elite at Cayuga Lake, he assumed he would probably fall out of the lead.

What he didn’t know is that most of the field was struggling right along with him — and despite catching five bass that weighed only 15 pounds, 4 ounces, he held on to first place with a three-day total of 64-5.

The Canadian pro will now lead the Top 10 remaining anglers into Championship Sunday with a chance to earn his first Bassmaster Elite Series victory and the $100,000 paycheck that goes with it.

“Today went by a lot quicker than the last two days when I had those big bags,” said Gustafson, who started the event with catches of 23-11 and 25-6. “I’m pretty surprised to be in this position. Hopefully I can close the door and catch those big fish again like I did the first two days.”

Despite his Day 3 dropoff, Gustafson has more than a 4-pound lead over second-place angler Chris Zaldain (60-0), who also struggled Saturday bringing in only 14 pounds. Minnesota pro Seth Feider caught just 15-14 and is in third with 58-11.

Gustafson was shocked to still be at the top of the standings.

“I was pretty sure I would have enough to stay in the Top 10,” he said. “But I figured I’d be probably fourth or fifth and playing catchup.

“I figured there would be another parade of 20-pound bags.

Many anglers were scratching their heads about why the quality of fishing took a nosedive Saturday. But some believed a cold front that blew into the region Friday evening was at least partly to blame.

After two days of bright sunshine, conditions were cloudy and cool Saturday — and Zaldain said it seemed to upset the entire ecosystem.

“The first thing I noticed was that the start of the food chain wasn’t like it was yesterday,” he said. “It starts with alewives. From there, the yellow perch eat those, the white perch eat them, even the bluegill eat them.

“On all of my best spots the first two days, it seemed like the whole food chain lived there. But today those little alewives weren’t there, and that just ruined a lot of the feeding activity.”

Like Gustafson, Zaldain has been fishing mostly offshore structure — and he said he intends to start offshore again Sunday. But if he sees quickly that it isn’t working, he plans to look elsewhere.

“I’ll have to think about it tonight,” he said. “I might fish a swimbait around some docks or something like that. I’m not sure what it’ll be. But if my first two spots aren’t cracking, I’ll have to do something different.”

The disappointment was obvious in Feider’s voice after he weighed in 15-14 — down from 21-8 and 21-5 the first two days. He also believed Saturday’s weather conditions played a role in his change of fortunes — and he’s hoping the front passes quickly.

“I’m praying for sun and a South wind,” he said. “I’ve got some stuff on the South end of the lake that I haven’t fished yet because it wouldn’t have been good on these days with a North wind.

“I think I can catch a big bag down there if it’s sunny and the wind is blowing out of the South.”

During the first two rounds, there were 28 five-bass limits brought to the scales that weighed 20 pounds or more. On Saturday, only three anglers cracked the 20-pound mark.

One of those anglers was New York native Jamie Hartman, who had the best catch of the day with 22-2. Hartman moved into fourth place with 58-9 — and considering he’s already come from 10th place on the final day to win an event Lake Guntersville earlier this year, he’s certainly within striking distance.

Alabama pro Scott Canterbury, who had been fishing one small spot most of the week, finally ran out of fish and brought only 9-10 to the scales. He finished 11th with 54-12, missing the Top 10 cut by only 7 ounces.

Canterbury held on to his lead in the Toyota Bassmaster Angler of the Year standings with a total of 679 points. Florida pro Drew Cook, a rookie from Florida, is in second with 660.

Cook caught only 14-7 Saturday, but made the Sunday cut in ninth place with 55-3. He maintained his lead in the race for DICK’S Sporting Goods Rookie of the Year.

Louisiana’s Derek Hudnall still holds the lead for Phoenix Boats Big Bass of the week with an 8-1 largemouth.

The tournament concludes Sunday, with the Top 10 remaining pros taking off at 6:30 a.m. ET from Frontenac Park. The weigh-in will be held back at the park at 3 p.m.