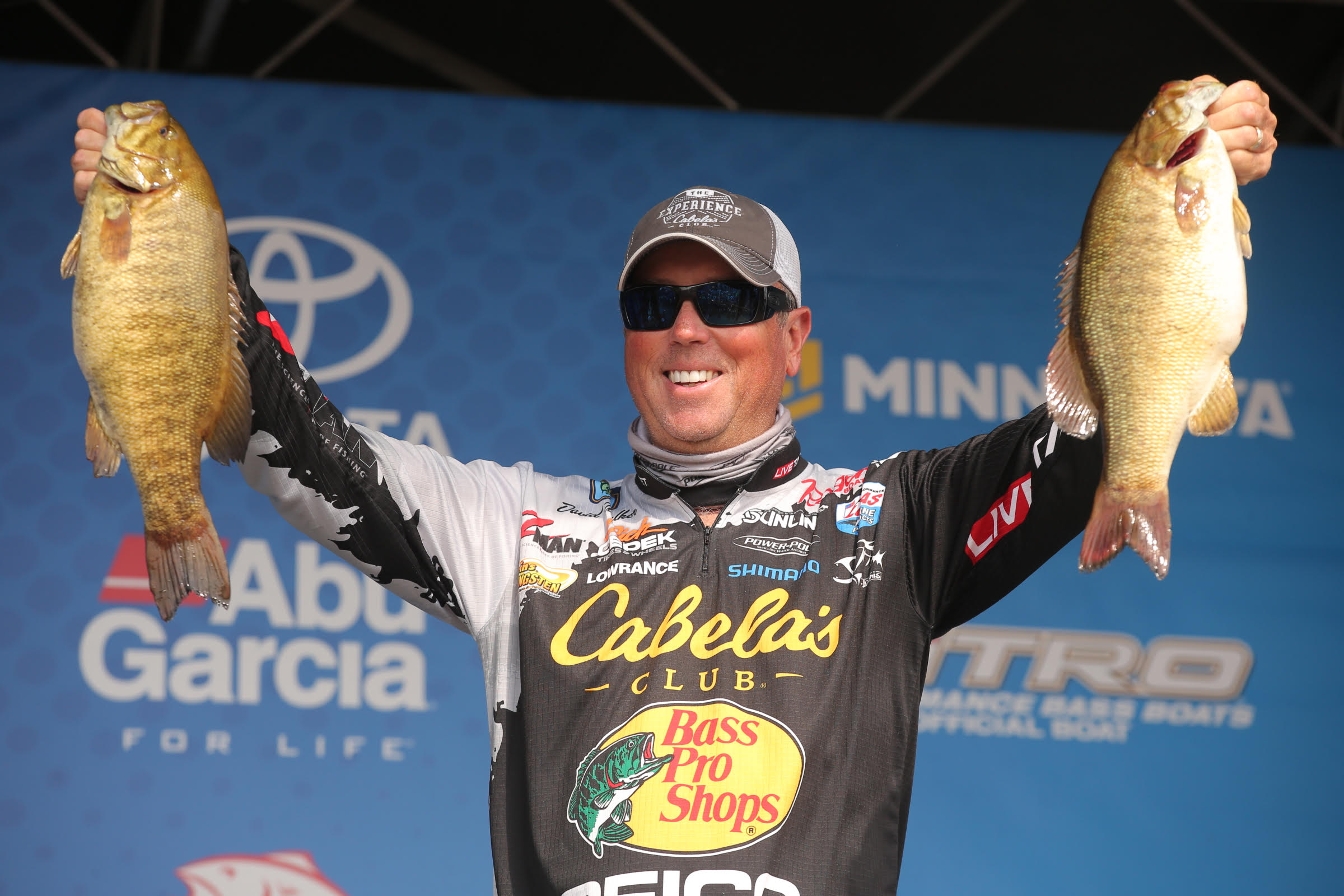 For the third day in a row, David Walker of Sevierville, Tenn., stayed consistent with huge smallmouth bass to take the top spot heading into the final round of the 2018 Huk Bassmaster Elite at St. Lawrence River presented by Black Velvet.

Walker caught a five-bass limit that weighed 22 pounds, 15 ounces to push his three-day total to 72-5 — giving himself a legitimate shot at the $100,000 first-place prize.

The last time the 12-time Bassmaster Classic qualifier took home top honors was in 2011 during an Elite Series derby on Alabama’s Wheeler Lake.

“It’s been way too long since I won on this tour, and I’m itching to take home another trophy,” Walker said. “It’s so hard to win at this level, so I know better than to take good days for granted, and the last couple of days were nothing short of magical. I sure hope I can keep the consistency going for one more day.”

Walker started Thursday’s opening round in second place, remained the same on Friday, and now he is in the lead by only 3 ounces. Arizona’s Josh Bertrand is in second after he weighed 23-9 for a three-day total of 72-2.

Just like most of the Top 50 anglers at this event, Walker has been moving often from spot to spot, drifting a dropshot across assorted types of structural elements. But he feels his presentation is different enough that it’s continuing to appeal to larger smallmouth bass.

“I shared a few spots with other anglers this week, but tomorrow I think I’ll have most of them to myself, which should only help me,” he said. “I know it sounds strange, but I know of too many places to catch a quality limit. I really had to focus on what I felt were the best locations today. I have no plans to change my game plan tomorrow. It’s been working wonders, why fix what isn’t broken?”

This derby is the final regular-season event before the Top 50 pros in the Toyota Bassmaster Angler of the Year race will advance to the AOY Championship event at Georgia’s Lake Chatuge in mid-September.

Bertrand is one of two anglers who not only has a shot at the coveted AOY title, but also at winning this event. Bertrand has two objectives: To win St. Lawrence and remain in contention to win $100,000 at the AOY championship.

“I’m thinking about AOY, for sure, but I’m not letting it dictate how I fish tomorrow,” he said. “My first priority is to win this tournament, but I also know that how well I finish here will have an impact on where I finish in AOY. We’ll just have to see how tomorrow shapes up.”

Bertrand is a renowned finesse expert, and his presentation has also been a drop shot.

“I’ve been using a new Berkley MaxScent Flat Worm and a Gulp! Minnow, and it’s been working great,” he said. “I’ve been hopping around to a lot of different spots, and I think it’s been important to thoroughly fish each spot, but to also not waste too much time if I don’t get bit. I’m excited to get going tomorrow.”

Bertrand’s main competitor in the AOY race is fellow Berkley pro Justin Lucas of Guntersville, Ala., who weighed 23-7 on Saturday for a three-day total of 70-3. Lucas’ performance so far will have him starting Championship Sunday in third place.

Both anglers are looking to win this event and AOY, which is a unique scenario.

“Yes, AOY is on my mind — there’s no way it can’t be,” Lucas said. “But just like Josh, my first goal is to win St. Lawrence, then we’ll worry about the championship.

“This week my go-to bait has been Berkley’s new MaxScent Flat Worm rigged on a drop shot. I’ve been narrowing down on certain areas that seem to be holding bigger fish, and I plan on doing much of the same tomorrow. It’s going to be an exciting finish for sure,” he said.

Brett Hite of Phoenix, Ariz., is still leading the Phoenix Boats Big Bass competition, thanks to a hefty 6-12 smallmouth bass he caught during Thursday’s opening round. If the big bass holds through Championship Sunday, Hite will win a $1,500 bonus.

Competition will resume Sunday with takeoff at 6:15 a.m. ET at Whittaker Park in Waddington, N.Y., and final weigh-in at 3 p.m. at the same location.