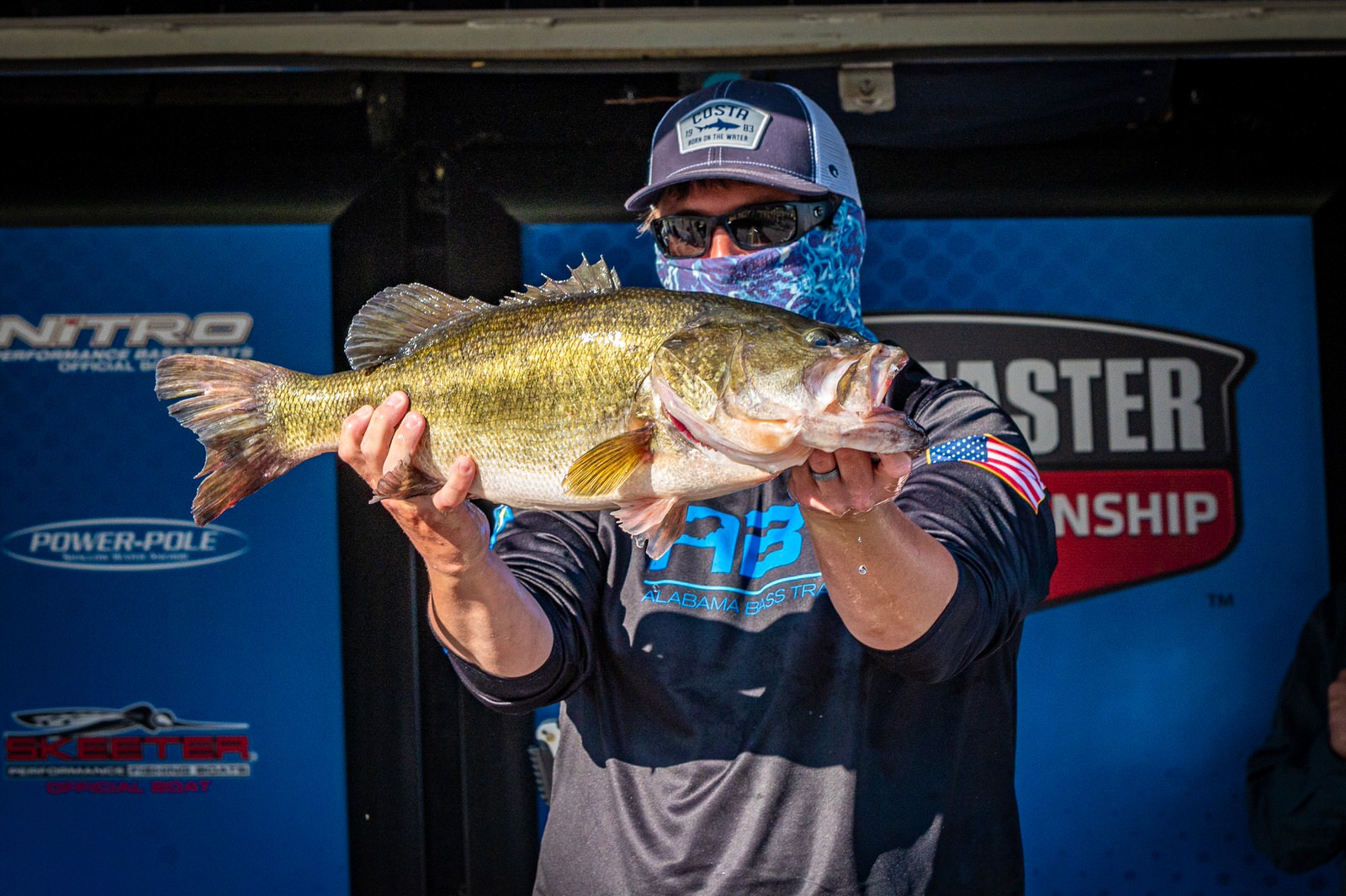 Victory in a child’s game Thursday night put Jordan Wiggins within striking distance of the biggest win of his life on Day 1 of the Bassmaster Team Championship Classic Fish-Off on the Harris Chain of Lakes.

Wiggins and Wesley Sams, from the Alabama Bass Trail, were fresh off winning the team portion of the event Thursday, and they needed to decide who would get dibs on a spectacular stretch of eelgrass they utilized for their victory.

They settled the matter with a game of “Rock, Paper, Scissors,” and Wiggins came out on top. The 29-year-old angler from Cullman, Ala., then leaned on the grass Friday to take the lead in the two-day fish-off with a five-bass limit that weighed 22 pounds, 9 ounces.

“I made my first pass along the grass and I caught a couple of 3-pounders,” said Wiggins, whose bag was anchored by a personal-best 8-12 largemouth. “I was able to finish my limit out, and on my next pass, I saw the big one about 30 feet off the grassline.

“My trolling motor was pointing that way, so I threw my ChatterBait over there. I cranked it two times and when he hit it, he knocked slack in it. We got a video of it. It lasted about 20 seconds. It was unreal.”

Wiggins’s limit jumped from approximately 12 to 19 pounds in an instant and his nerves settled.

“I knew I could kind of lay back on them a little bit then because I knew I had a good bag,” he said. “I didn’t want to keep busting them because I’m going to need every 2-pounder that’s there tomorrow.”

Even with a 7-9 lead over Keith Tuma of the Minnesota B.A.S.S. Nation, who is second in the fish-off with 15-0, Wiggins thinks he’ll need 18 to 20 more pounds to seal the victory. If he does, he’ll nail down the final spot in the 2021 Academy Sports + Outdoors Bassmaster Classic presented by Huk scheduled for March 19-21 on Lake Ray Roberts near Fort Worth, Texas.

“I know I’m gonna need that weight tomorrow,” Wiggins said. “The second day is always harder than the first. It’s always a mental grind. I’d rather come from behind, but I’ll take what I have. I was very fortunate today.”

Tuma rode a strong morning bite to second place. He said he’s throwing a “big worm and also a Senko worm on a really light weight with a heavy hook and braid because I know the fish here can be big.”

Tuma caught a 7-pounder during the Team Championship, and Wiggins’ giant on Friday reaffirmed for everyone that no lead is safe on the Harris Chain.

Hefty bites have been steady this week with the weather warming daily, from the mid-50s on Wednesday to the high 70s on Friday. Saturday’s conditions are expected to be partly cloudy with a high temperature around 80 degrees, which could mean more lunkers on the line.

“On this lake, it’s one bite that could be the difference-maker,” Tuma said. “You could get five bites like that. It’s anybody’s game here.”

Wiggins and Sams won the two-day Bassmaster Team Championship on Thursday with a total of 10 bass that weighed 39-8. They collected a $20,000 cash prize from Ranger/Mercury, as well. Walls and Tuma finished second in team standings with 39-1 and Mayfield and Adams were third with 38-2. The Top 3 tandems in the team portion advanced to the Bassmaster Team Championship Classic Fish-Off.

The fish-off concludes Saturday at Ski Beach Park in Leesburg’s Venetian Gardens. Weigh-in is scheduled for 3 p.m. and fans can catch all the action live on Bassmaster.com.

The tournament is being hosted by GO Sports, Visit Lake and the City of Leesburg.