FLIPPIN, Ark – Jack Hippe and Nick Czajka, collegiate anglers from Adrian College, won the Ranger Cup University Team of the Year Challenge in a winner-take-all, made-for-TV event on Texas’ Fayette County Reservoir, a power plant lake located in south central Texas. The tournament, which utilized a rules format where all legal fish are weighed and released from the boat, pitted the Adrian College anglers against a team from Bethel University – two of the biggest schools in the sport today. 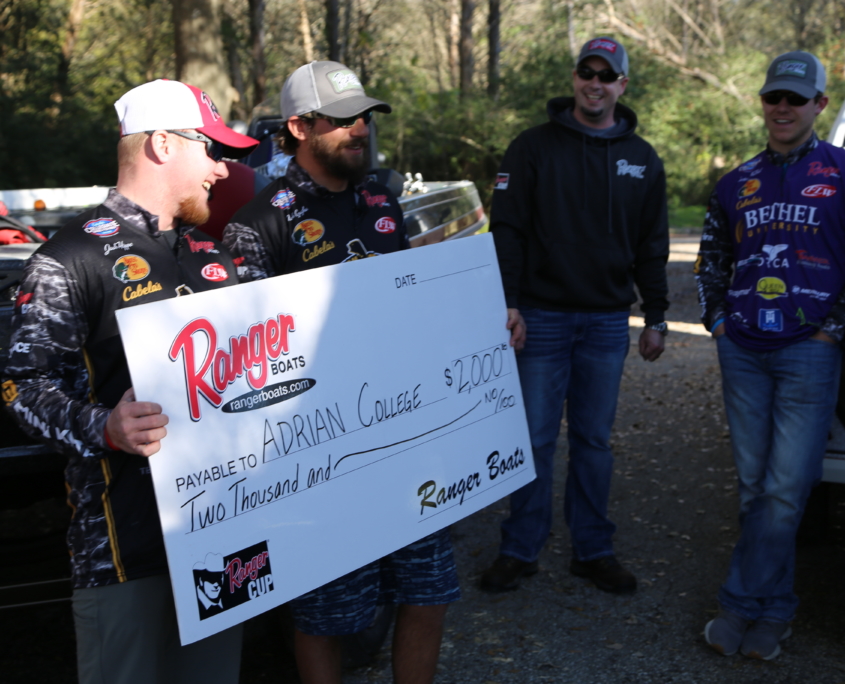 Both teams faced the challenge of landing as many legal fish (over 14 inches) as possible in a single day to take the title. The teams went into the event with only one hour of pre-fishing right before the start of the competition.

Coming from Michigan, where Adrian College is currently covered in ice and snow, the anglers had to quickly adjust to the warm weather and warm water conditions of the power plant lake.

“I have only fished a power plant lake once, and that was in July,” said Hippe. “It was something that was totally different for us completely. Fishing in Texas and how the body of water played out. Near 80-degree water temperatures in January were something that neither of us were accustomed to by any means.”

“We spent a lot of time looking at maps and planned spending a fair amount of time out deep,” said Hippe. “We had one hour to go around and look at the lake and realized the water was a lot warmer than we had expected. We went to the bank and covered as much water as we could. We got lucky and found a few fish.”

The team started their day just a few hundred yards from the launch, targeting the fish found during their previous hour on the lake.

“I started in the morning throwing a jig to the edges of the cattails while Nick threw a buzzbait,” said Hippe. “There for a minute, I picked up a Chatterbait, which I caught four or five fish.

The team started fast by boating a key fish early in the morning – a 5-pound, 4-ounce, largemouth on a black buzzbait. With an early lead, Hippe and Czajka leaned heavily on flipping into the cattails to strengthen their lead.

“We were catching them up in cattails,” said Hippe. “We can across a handful of beds but didn’t see any locked on per se. Once it got high sun, they pulled in tight to those cattails.”

Going shallow to pitch jigs in the cattails proved critical to taking the title, as the anglers from Bethel opted to fish deep early in the morning, which put them behind from the start. The Bethel anglers matched the Adrian anglers for most of the day, but the early deficit was too much to overcome. In all, Hippe and Czajka boated approximately 87 pounds to take the title of Ranger Cup University Team of the Year.

“We are super stoked,” said Hippe. “We were so excited. To be able to win that event was fantastic and so cool for us.”

As part of the competition, both teams fished from brand new, fully rigged Ranger Z519’s powered by Yamaha 225 SHO outboards.

“Nick and I are both very aggressive anglers,” said Hippe. “We both like to fish up front and we were able to comfortably fish next to each other all day. The storage is great too. It was awesome to have all that space to keep everything organized. We brought 35 rods and packed them all in there.”

With this win, the team took home won $2,000 as well as bragging rights for their university. For competing in the challenge, both participating teams received a grand-prize package that included travel, lodging and meals.

The made-for-TV fish off will be televised nationally on future episodes of “Americana Outdoors” and the “Cabela’s Collegiate Bass Fishing Series.”

Modeled after Ranger Cup, the most lucrative contingency rewards in the industry, Ranger Cup University is the first program designed exclusively for collegiate anglers and is open to those fishing in either FLW- or BoatUS-affiliated competitions. Signup is free, regardless of which brand of boat the anglers own. To remain qualified in the program, anglers need only adhere to clothing and logo requirements. As part of the Ranger Cup University program, participants will be able to receive specially discounted tournament gear through Gemini Custom Apparel, with no artwork or set-up fees. Through this partnership, Ranger Cup University anglers can purchase fully customized tournament jerseys for as low as $48.

Headquartered in Flippin, Ark., Ranger Boats is the nation’s premier manufacturer of legendary fiberglass and aluminum fishing boats, with acclaimed models and series in the bass, multi-species, fish ‘n play, saltwater, waterfowl utility and pontoon boat segments. Founded in 1968 by Forrest L. Wood, Ranger Boats continues its commitment to building the highest-quality, strongest-performing boats on the water. For more information, go to RangerBoats.com.