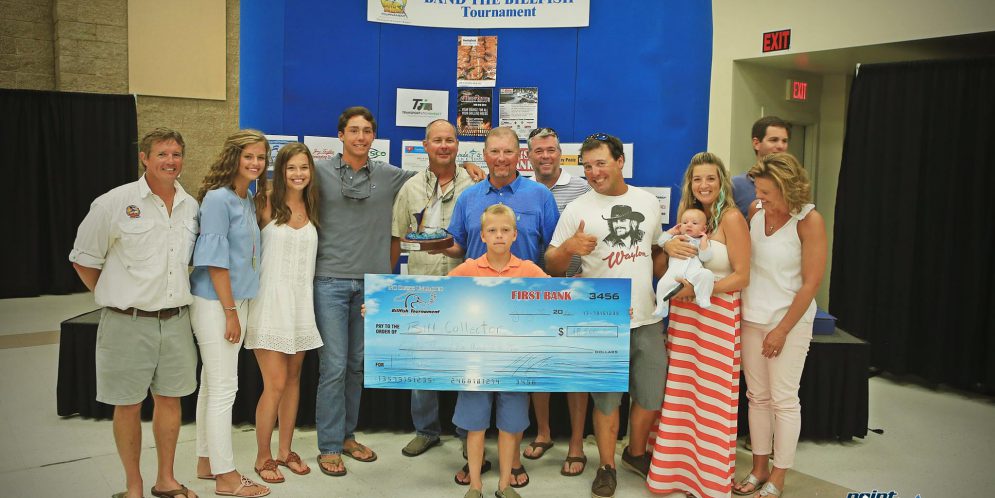 August Tournaments Wind Up Billfish and Fire Up Kingfish and Redfish
By
Capt. Jerry Dilsaver

There have been some impressive catches in North Carolina tournaments Bill Collector Dolphin -Ducks Unlimited 2016so far during 2016 and more are coming.  August is still the summer, but there are usually a few cracks in the heat that fire fish and fishermen up.  With the excellent catches during the oppressive heat during July, fishermen anticipate any cooling will catapult fishing to the next level – and the level is already pretty high.  August fishing could really be special.

Point, Click, Fish, will arrive at Pirate’s Cove with the Ultimate Fishing Truck and Mobile Command Center for the final registration and captain’s meeting for the Alice Kelly Tournament on August 13 and will be on site through the awards ceremony at the end of the tournament on August 19.  Hookups, releases and boated fish will be streamed online here at Point, Click, Fish and on the Pirate’s Cove Big Game Tournaments website.

It’s too far out to guesstimate weather for any of the August tournaments, but the bets are on for hot and humid weather.  Dog days don’t seem to have arrived, but many things in the fishing world are running late this year and they may make stake their claim at any time.  Fishermen will welcome less wind to deal with, but they’ll hope the heat and humidity take a break or at least moderate a little.

These tournaments begin a few days before the full moon and continue to one day past.  Some fishermen don’t like fishing around the full moon, but the lunar charts show this as a time of increased activity and feeding and I agree.  The full moon is August 18 and the lunar charts show a strong activity period overlapping the noon solar period on the 17th and 18th and beginning just after the noon solar period on August 19.  They are earlier in the day at the beginning of the tournament, but there are strong lunar periods every day during tournament hours.

I’ll go out on a limb and say there may be a big blue marlin or two landed.  That certainly has been the case so far this year.  However, I believe that if no other factors override their influence, this combination of a full moon, with strong midday solar and lunar periods, should produce hot white marlin and sailfish action.  Expect to see a lot of release flags at the dock each afternoon.

Point, Click, Fish will begin the month at tournament 3 of the Carolina Redfish Series.  The PCF Team will be on site at the weigh in at Saltwater Grill on the Swansboro Waterfront on August 13.  Live streaming weigh in coverage will begin with at 3:00 P.M. and fishermen have been catching some fat reds.  A 15 pound 2 fish winning total is within reach.

Fishermen should have their catch early during this tournament.  A strong lunar period doesn’t quite overlap sunrise, but begins shortly after.  These fishermen are good and may catch fish all day, but the winner may well be finished fishing early and be sitting just off the docks shortly after lunch waiting for the scales to open.  The outcome of this tournament will determine which teams will be fishing the Carolina Redfish Series Championship tournament in Atlantic Beach on September 17.

Point, Click, Fish will wrap up its August on-site tournament coverage on August 27 from the second tournament of the Cape Lookout Shootout King Mackerel Series.  This will be held from the Boathouse in Marina Village in Beaufort.  A 40 pounder won the first tournament in July and unless the weather throws a wrench into the works, someone should have a bigger one for this tournament.

The moon will be pretty dark and there is a morning major lunar activity period shortly after sunrise.  This might be timed just right to let fishermen get fresh bait that morning and the bite be firing off as they arrive at their chosen spots.  I believe I would be heading east across the shoals, but not be making a run too far.  This is a good time for a lone big mama king to be cruising one of the spots east of Cape Lookout and within sight of the lighthouse.  She’ll eat a big bluefish if someone finds one to tempt her.

Point, Click, Fish wants to be the one-click link between fishermen and tournaments.  PCF tournament services begin with a website design team that can build tournament websites to handle everything from registration, to tournament news and live streaming weigh-ins, with instant leaderboard updates that are automatically uploaded to Facebook, Twitter and Instagram.  For those tournaments who would like a prominent tournament headquarters, the PCF Ultimate Fishing Vehicle can tow the Mobile Command Center to the tournament site where it can be set up to be tournament headquarters, the weigh center, and the stage for captains meetings and awards ceremonies.  The Mobile Command Center also includes an interview room for media to meet and interview the tournament winners.
August 2016 North Carolina Tournaments

* Weigh – Ins for tournaments with an asterisk will be streamed live from on-site by Point, Click, Fish.

NOTE:  If any tournaments were not included in the list, we apologize, but we did not have any information on them.  Tournament directors are urged to send their tournament information and press kit to Capt. Jerry Dilsaver at [email protected].