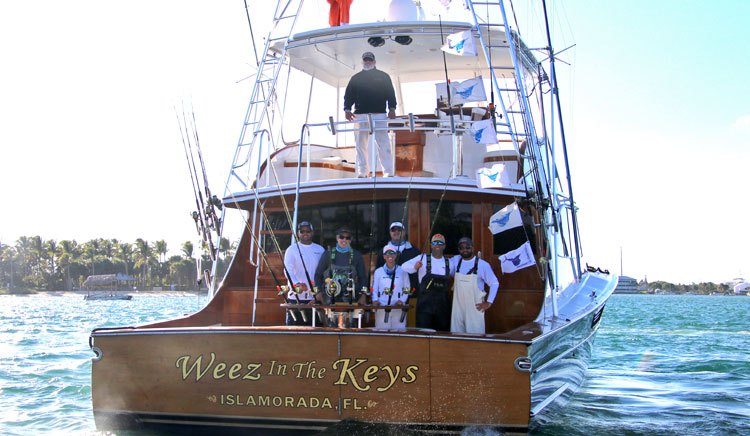 The 6th Annual Operation Sailfish tournament made landfall on December 6th in West Palm Beach at host venue, Sailfish Marina.  A total of 42 teams showed up to compete for a purse in excess of $720,000 and pay tribute to our United States military.  The tournament got underway with its signature ‘Take a Hero Fishing Day’ where 30 veterans, wounded warriors and active duty military had the opportunity to pair up with the best sailfishing teams in the world for the fishing trip of a lifetime.  For many, it was a bucket list trip catching their first sailfish ever.  Captain Skip Dana and his crew aboard Sir’ Reel won the ‘Take a Hero Day’ with an impressive tally of nine releases.  Tyler Wells caught his first two sailfish ever while fishing together with his brother-in-law Chris Lemieux on board Advanced Roofing/Sailsmen.  His two sailfish releases were enough to earn him the Top Hero trophy as well.  Gator One won the trophy for the heaviest meatfish with a 14.6-pound dolphin.

On Friday December 8th, the tournament action kicked off when the 8am lines-in call was made for Day 1 as teams looked to kick start the first leg of the Quest for the Crest with a bang.  Team Doing it All/Hard Way found the fish early in their 39’ Contender.  They released five sails before noon to take the early bite and a bonus $1,000. Team Kona Blue and their 39’ Mercury powered SeaVee was hot on their heels at the midday turn with four releases of their own.  With just an hour to go on Day 1, Captain Chris ‘Zig’ Zelienski and his Weez in the Keys team caught fire releasing five fish to propel themselves into a first place daily and the late bite worth $77,950.

Day 2 fishing was postponed from Saturday to Sunday due to severe storm warnings associated with an approaching cold front.  A forecast for winds off the north and temperatures in the mid-forties on the backside of the front had teams fired up for the potential of an epic bite on Sunday.  The morning started slower than expected for most, but newcomers to the tournament, team MDALA, got into a groove early releasing five sailfish before 11am to claim the early bite.  As the day pressed on, teams Free Bird and Utopia got on the fish and continued climbing the leader board as well.

The first half of Day 2 had to seem like an eternity for Day 1 leaders, Weez in the Keys.  By noon they had not called a fish in and their lead was rapidly diminishing.  Sure enough, at 12:54pm team Utopia called in release number 12 and took the lead in the tournament with only two hours of fishing to go.  Shortly after that, Free Bird released another fish to leap frog Weez in the Keys for the second place spot with 12 releases.  At 2pm Captain Zig knew he needed to make an aggressive move.  He did just that and Weez in the Keys went on a tear releasing three fish in the last hour to reclaim the lead and win the tournament with 14 releases and a $210,000 payday!  Utopia finished in second with 13 releases and $75,150 in prize money.  Team Seraphim finished strong on Day 2 releasing 10 fish to win the daily.  Their 13 fish two-day tally was enough to bump them into third place overall in the tournament with total winnings of $122,180.  The Top 5 were rounded out with Free Bird in fourth with 12 releases followed by Advanced Roofing/Sailsmen in fifth with 11 releases.

Doing It All/Hard Way cruised through the first two rounds of the Release Roundup competition in the tournament releasing five fish in the first round and three in the second round, although they only needed one release in the second round to advance.  On the start of Day 2 and Round 3, lucky number two was pulled and the $196,200 jackpot was getting closer and closer to a reality for the team.  Unfortunately, they ran out of steam releasing one fish in the third round.  So the jackpot rolls forward into the next leg of the series, Sailfish 400, where it is expected to exceed $225,000 for a $1,000 buy in!

In addition to the great payouts to teams, a check for over $7,000 will be presented to the tournament charity, Operation Homefront, a non-profit organization dedicated to assisting military families as they transition from service back into civilian life.  To learn more about how you can help support their mission, visit www.operationhomefront.org.

Three more legs remain before the top sailfishing team in the world is crowned. Leg 2, Sailfish 400, takes place January 17-21 in Miami, with a third stop in Fort Lauderdale on February 21-25 and the grand finale in Key West on April 17-21.  For a complete breakdown on the tournament results for Operation Sailfish, visit www.operationsailfish.com For a complete list of the point standings in the Crest race, visit www.questforthecrest.com