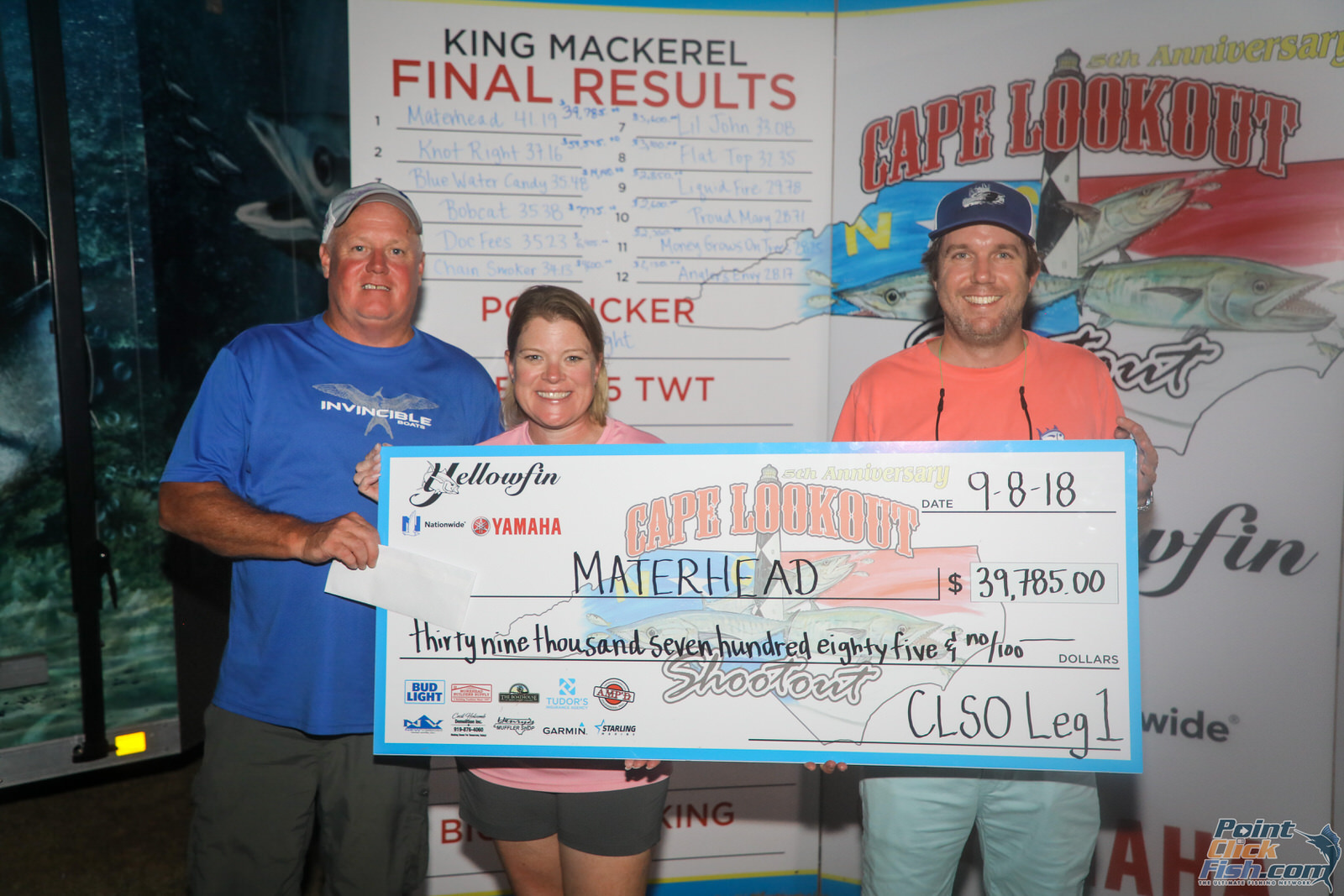 The first tournament of the Cape Lookout Shootout King Mackerel Series was postponed until November because of weather, so the second tournament, held September 8 from Boathouse Marina in Beaufort, became the first tournament of 2018.  The fishermen and fish didn’t mind as they were just happy to participate in this premiere tournament series that supports Military Appreciation Day.  When the scales finally closed on September 8, Capt. Mark Yokely, his wife Brittany and nephew David of Team Mater Head breathed a sigh of relief as their 41.19 pound king had remained atop the leader board and they were declared the winners.

Fishing conditions began a little bumpy, but laid out to allow fishermen to go anywhere in the boundaries they wanted.  Most fishermen stayed somewhere on the east side of Cape Lookout Shoals, with many fishing the popular rocks, wrecks and reefs close by.  Fishing was pretty good, with most teams catching fish, but maybe just not quite as large as they had hoped.

There are two tournaments remaining to set the field for the 2018 Cape Lookout Shoot Out Championship to be held in November. Team Mater Head became the first qualifier with their win at this event.

“Our day started off good, by catching bait at Harkers Island early,” Yokely said.  “After check out, we headed straight to where we planned to fish and put our lines out and caught our first fish right off.

“After this it slowed for a while and more boats were heading out,” Yokely added.  “We continued working our spot and about 9:00 the big fish hit.  It ran pretty good, but my nephew David  had the rod and brought him right back in. He’s really easy with fish and this one came right to the boat.

“We were all surprised when it didn’t make another run after seeing the boat, but it didn’t.  It was still deep, but David eased it within gaff range and I reached down and stuck it.  It was in the boat in 10 minutes and that’s not typical at all for a fish this size.”

Yokely said they looked at the fish and thought it was a nice one, but didn’t think it was large enough to win.  They were certain someone would catch one at least a little heavier.  They thought their fish was about 45 pounds and that it would take a 50 pounder to win.

“We continued to fish, but by late morning the bite had died,” Yokely said.  “We hung it out until around noon, but hadn’t had a strike in a while and decided to head in and wait at the scales.  That way we would be there and nothing could happen in a last minute rush.

“By being at the scales early, we got to see everyone weigh in,” Yokely said.  “Typically anyone with a big fish brings it in early and when no one had weighed a larger fish by about halfway through, we started thinking our fish might hold for the win.  It was a nice surprise when it did.”

Capt. Scott Pelletier and the crew of the Knot Right are no strangers to winning king mackerel tournaments, but this time they had to settle for second place.  Pelletier said the day was long for their team, which includes fishermen from 21 to 60 years old.

“We left the dock at about 5:00 to go catch bait, just like we usually do,” Pelletier said.  “That didn’t go particularly well and it was between 7:30 and 8:00 before we had enough bait to go fishing.  Then we had to go check out.  Thankfully, we were fishing pretty close and began fishing about 8:30.”

Knot Right caught their first fish about 9:00.  They estimated it as being in the mid 30s and kept fishing.  Their big fish hit a pogy on the short line at around 1:00.  They knew this fish was larger than the first, but didn’t think it was big enough to win and put their lines back out.  The Knot Right king weighed 37.16 pounds.

“I never think we’ve got it done, even with a really big fish,” Pelletier said.  “That’s just not the way we work.  Fishing was slow and we had been contemplating making a move when this fish hit. It snapped us back to reality and gave us some renewed confidence in the spot.  We weren’t expecting to finish in second place with this fish, but we’ll take it.”

A trio of 35 pounders filled the next three places. Blue Water Candy finished third with a 35.48 pound king, while Bobcat was only .1 pound behind at 35.38 pounds in fourth place.  Doc Fees caught a 35.23 pound king to finish fifth.

NOTE:  The second leg of the Cape Lookout Shoot Out king Mackerel Series, Scheduled for October 12-14,  was postponed due to concerns with the passing of Tropical Storm Michael. The second and third Cape Lookout Shoot Out Series tournaments will be fished back-to-back on their preciously scheduled alternate dates of November 2 to 4.  After these tournaments are completed, the results will be tallied and invitations will be sent for the series championship that will be held November 16 to 18 from Boat House Marina in Beaufort.