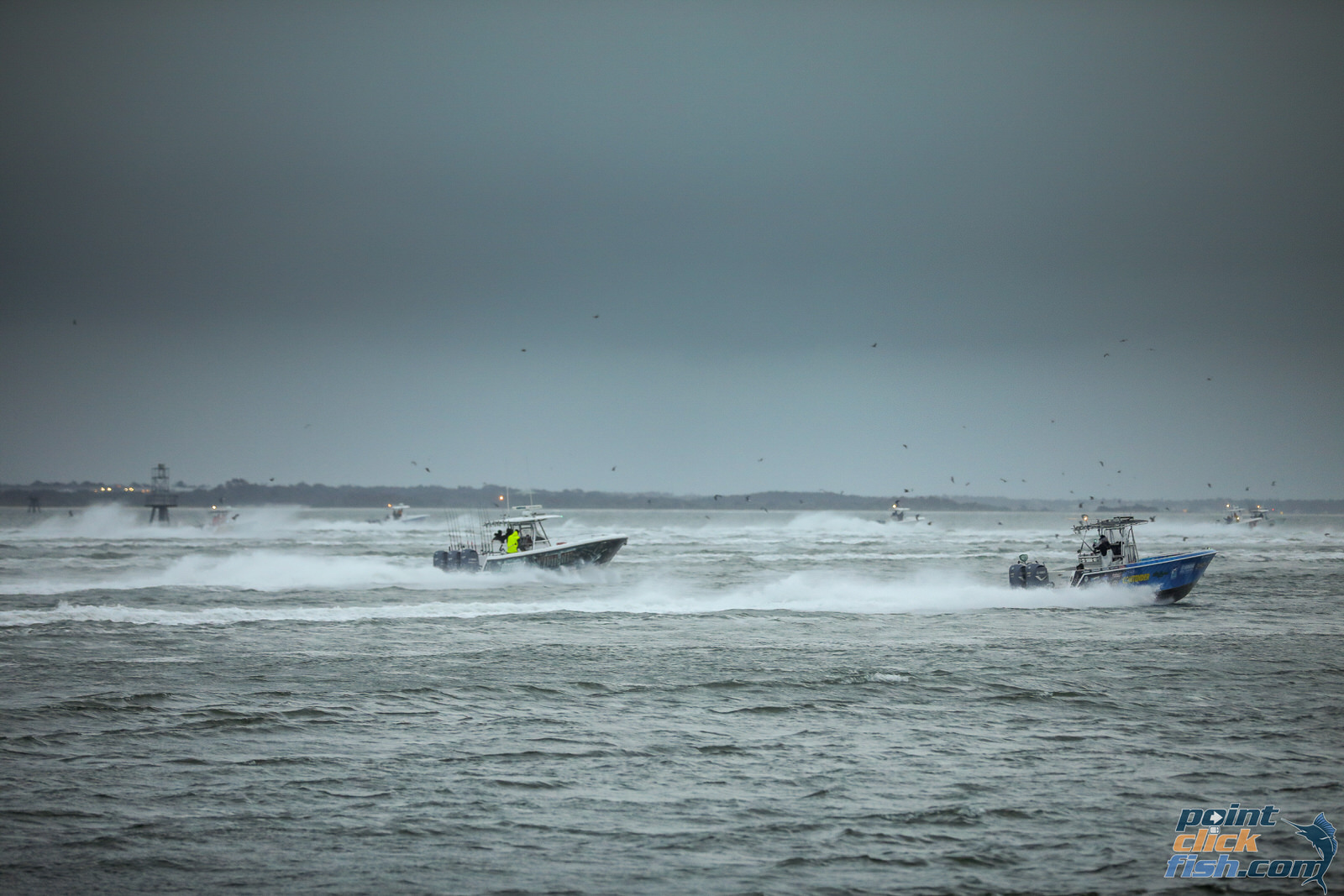 The Southern Kingfish Association (SKA) held their 2018 National Championship Tournament in Morehead City November 8 to 11.  Fishermen from the Carolinas to the Gulf of Mexico competed in the tournament, but the “home playing field” advantage worked for the Tar Heel fishermen as they swept the three categories.

The SKA sanctions tournaments in eight regional division from the Gulf of Mexico to North Carolina.  Fishermen compete in Open Class Boats (any size boat), Small Boat Class Boats (up to 28 feet long), and Single Engine Boats (only one outboard motor) in their regional divisions to qualify for an invitation to the National Championship Tournament.

The SKA Championship Tournament is often considered the Super Bowl of King Mackerel Fishing and that fits pretty well, except that more than two teams are competing. There were 84 teams in the Open Class, 29 teams in the Small Boat Class and 10 teams in the Single Engine Class.

The SKA Championship Tournament is based on a team’s two largest fish from two days of fishing.  Teams may weigh one fish each day or both fish either day, but may only weigh two fish.  Adverse sea conditions tested all anglers, but reports of large fish from a local benefit tournament held earlier in the week had fishermen optimistic and expecting big catches.

Unfortunately, the kings decided to take a day off on Friday and not many were caught. This led to a lot of second guessing, hand wringing and long runs chasing fish the second day.

The Stormy Gale qualified from Division 1, which is Central North Carolina. Capt. Alex Hull and Casey Vaughan began the tournament with two other team members that suffered injuries in the rough conditions on the first day and didn’t fish on Saturday.  They had not weighed a fish on Friday, so needed to produce a pair of fish on Saturday.

“We did a lot of guessing Friday night, but the place we were fishing has produced for us before, so we decided to go back there on Saturday,” said Alex Hull.  “We had barely gotten the lines out when we had our first strike Saturday morning.  It ran hard and we thought it might be a good fish.  It was too.  We had caught a 52 earlier in the week and knew this fish was bigger, so we knew we had a great start.

“It took a long time to back it up,” Hull added.  “It was almost noon when we caught the second fish.  It was a pretty nice fish and we thought we might be in the running. By the time all the fish had been weighed and the results announced, I was in shock.  The feeling is indescribable.”

Hull was right about the Stormy Gale’s fish. Their first fish weighed 60.22 pounds and was the largest fish of the tournament.  Their second fish weighed 32.25 pounds and gave them a 92.47 pound aggregate.

We were just in the right place at the right time, with the right bait,” said Vaughan.  “We took time to catch bluefish for bait and it paid off.  This is a dream come true.”

“Our first day was horrible,” said Tripp Hooks of the Black Pearl Fishing Team.  “We didn’t have a bite all day.

“We got good reports from a hot bite back home and a lot of boats were saying they were going to run there for Saturday,” Hooks said.  “We talked about it a little, but decided we should probably stay here and fish longer.  We are fishing a 1986 Hydra-Sports that my dad refurbished and have older motors on it, so we went back to off Drum Inlet, where we fished the first day, and ground it out there.  We had finished second in the championship last year and wanted to do better.”

Hooks, his dad, team Capt. David Hooks, and team mate John Cooke, who qualified in Division 9 (Southern N.C.), did do better. The second day of fishing was better for most boats, but it wasn’t stellar and the Black Pearl’s 24.79 and 21.56 pound kings combined for 46.35 pounds and the win in the Small Boat Class.

Lane Benton, captain of the Dirty South which qualified in Division 1, was one of the youngest captains in the tournament at 21 and now hold the distinction of being the youngest captain to earn a SKA National Championship.  He, Brad Drake and Logan Palmer weighed kings of 24.41 and 17.17 to total 41.58 pounds and win the Single Engine Class.

“It wasn’t easy,” Benton said.  “We made a last minute decision to fish off Drum Inlet on Day 1.  The inlet was super nasty and we’re only in a 21 foot boat, so we took a beating getting out. One of the last waves was particularly bad and we stopped a few minutes to gather ourselves before heading off.

“As soon as we got there, we had a king around 25 pounds sky, but not hook up,” Benton continued.  We were fishing by ourselves until about noon and hooked up again when the first boat pulled up.  That was our 24 and we were glad to have a fish in the boat, but didn’t think it would do much.  We were really surprised that night when we checked the leader board and it was the largest fish in our class.”

Benton and Palmer decided to fish closer on the second day as conditions were still rough and Drake had to miss the day to attend his sister’s wedding.  They fished alone on Saturday until about 2:00.  They caught five kings on Saturday, but none were large.  They were hoping they would stay in the top three. The largest of their Saturday fish weighed 17 pounds and was large enough when added to their Friday king to claim the win in the Single Engine Class.

Other Carolina fishing teams also represented themselves well.  The Carolina Kings team of Douglas Ford, Scott Parsons, Ben Singleton, Jody Hildner, Callie Ford and Thomas Alvin Matthews finished in second place in the Open Class with kings of 50.93 and 36.66 pounds for an 87.59 pound aggregate weight.  In addition to the boat standings, Callie Ford topped 37 ladies to earn the Top Lady Angler prize and Thomas Alvin Matthews, Ben Singleton and Scott Parsons are all senior anglers and led the group of 85 senior anglers to  share the Top Senior Angler prize.

Bennett Canady fished with Matt Canady, Scott Canady, Josh Smith and Matthew Caulder on the Reel Exterminators to claim Top Junior Angler honors with their 42.47 and 12.48 kings that combined for 54.95 pounds and eighth place in the Open Class.

The full leader board is available below.