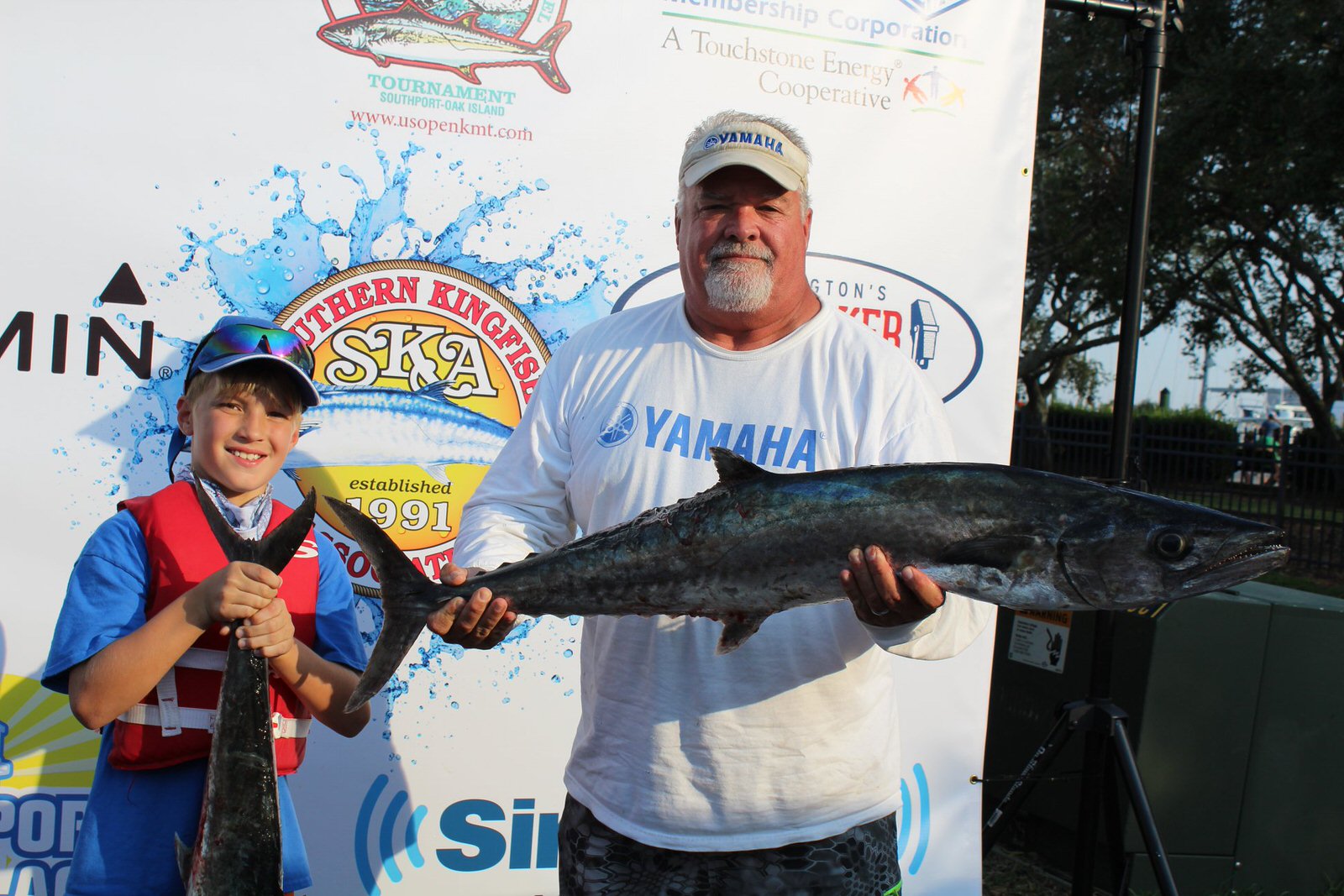 Their fish wasn’t as large as it usually takes to win the prestigious US Open King Mackerel Tournament, held October 4-6 from Southport Marina in Southport, but that’s OK with Capt. Dieter Cardwell, Mike Lundy, Kevin Alley, Alex Ferm and Ole Ferm of Team Tide Line.  It was large enough at 37.20 pounds to collect a prize payout that is being heralded as the largest ever in a king mackerel tournament.

Cardwell, Lundy and Alley knew what it was like to win the US Open King Mackerel Tournament.  They topped the field 18 years ago in 2000.  Saturday, October 6, they learned what it’s like to win the prestigious tournament for the second time.  This time their win came under a revised format that has provisions for an increased payout that can make fishermen big winners.  They got to experience the thrill of victory and a huge payday.

The competition was tough, with 432 boats looking for the big fish between Swansboro, N.C. and Murrells Inlet, S.C.  When Team Tide Line won the tournament in 2000, their total prize earning was approximately $40,000.  Saturday night they collected slightly more than $112,000 for their 37.20 pound winning king.  That’s a pretty substantial increase.  This included $108,717 from the tournament, approximately $2,300 from the SKA and Junior Angler Alex Ferm collected $500 each day for topping the Junior Angler Aggregate category.  Ferm and his dad, Ole, were guests aboard the Tide Line for the tournament. 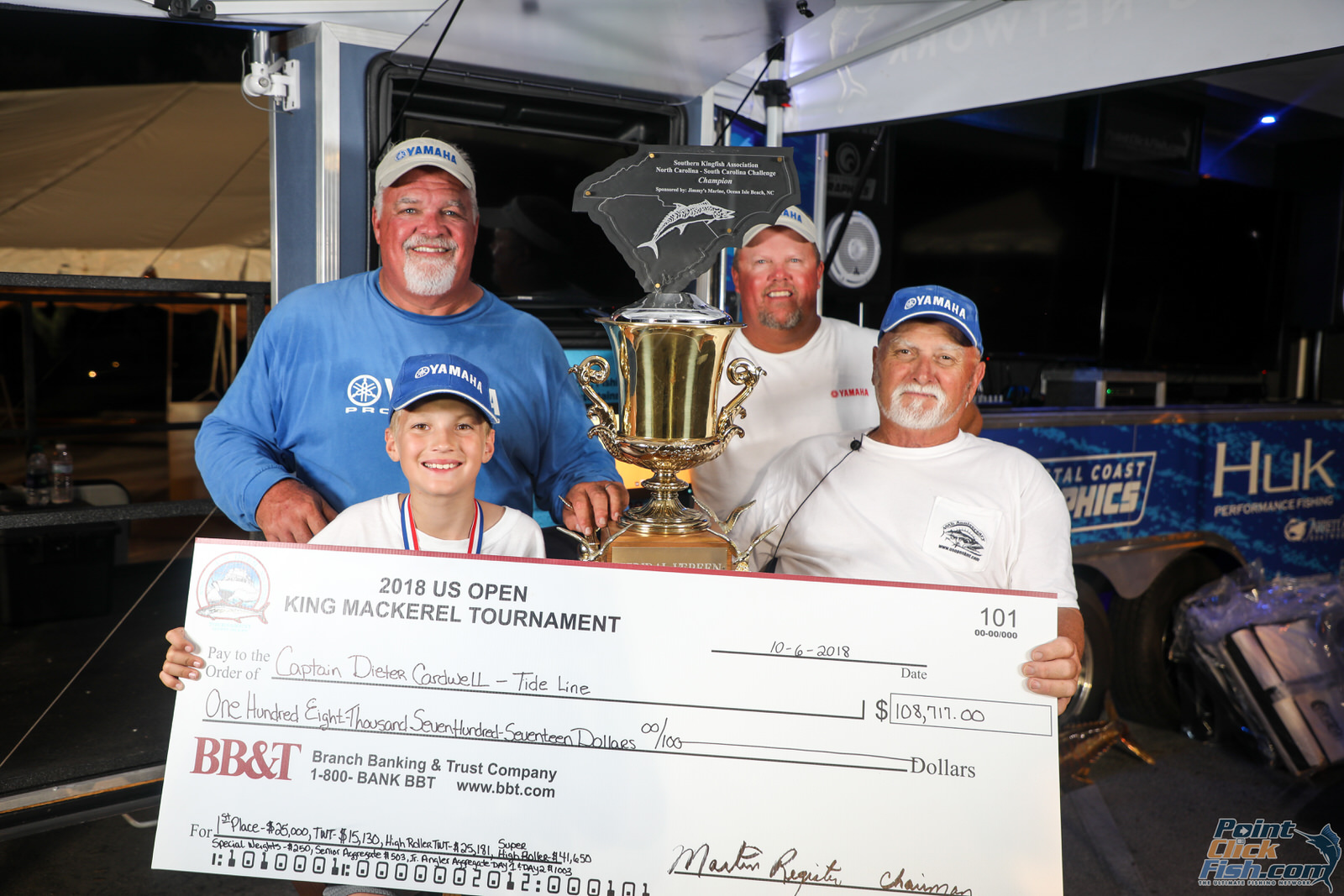 The win didn’t come easy.  The Southport area was hit hard by Hurricane Florence several weeks earlier in September and is still working its way back.  Participant had to take a detour on the main road heading to Southport Marina to reach Final Registration and the Captains Meeting.  One of the other lingering effects was dirty water. Mike Lundy of Team Tide Line summed it up best saying it was dirty, not clear and it smelled bad.

King mackerel had returned to off Oak Island a couple of days after the storm passed, including several fish caught from Ocean Crest Pier.  However, Monday before the tournament, the fish and the bait basically disappeared. Fishermen were desperately seeking both in the days before the tournament began – and without much luck. That scarcity of bait and fish continued through the first fishing day on Friday.

“We gathered all the information we could prior to the tournament and made the decision to run south,” said Capt. Cardwell of Team Tide Line.  “We really like to fish this tournament right out front, but the bait and fish had moved, so we needed to do something else.  There had been good king mackerel reports from several of the Myrtle Beach piers, so we decided to run south.”

Cardwell said they checked out at Holden Beach and had to run a bit to reach S.C. and a few boats had beat them to the bait and had it scattered.  He said after catching bait they stopped first off Apache Pier, but there were lots of boats there and the bite wasn’t very good.  They decided to head farther south and took off down the beach again.  This time they found some scattered bait pods, caught fresh bait and started fishing.

They caught a king right away, which they took as a good sign and began fishing the bait pods.  A while later they caught a second king, but neither was large enough to do anything on their own.  However, these two kings were heavy enough for Alex Ferm to win the Junior Angler Aggregate prize for Friday.

“Saturday morning we ran south again,” Cardwell said.  “This time we didn’t even slow as we passed Apache Pier and ran straight to where we had fished the day before.  Several boats had pulled in there Friday afternoon and we were afraid they would tell friends about the better conditions – and they did.  There was a huge crowd Saturday morning.”

Cardwell said they stopped long enough to catch bait and then continued down the beach some more.  They were a few miles from the tournament boundary when they found an area with cleaner water and more bait pods.  There were only about a dozen other boats and they were well spread out so Team Tide Line stopped to fish. 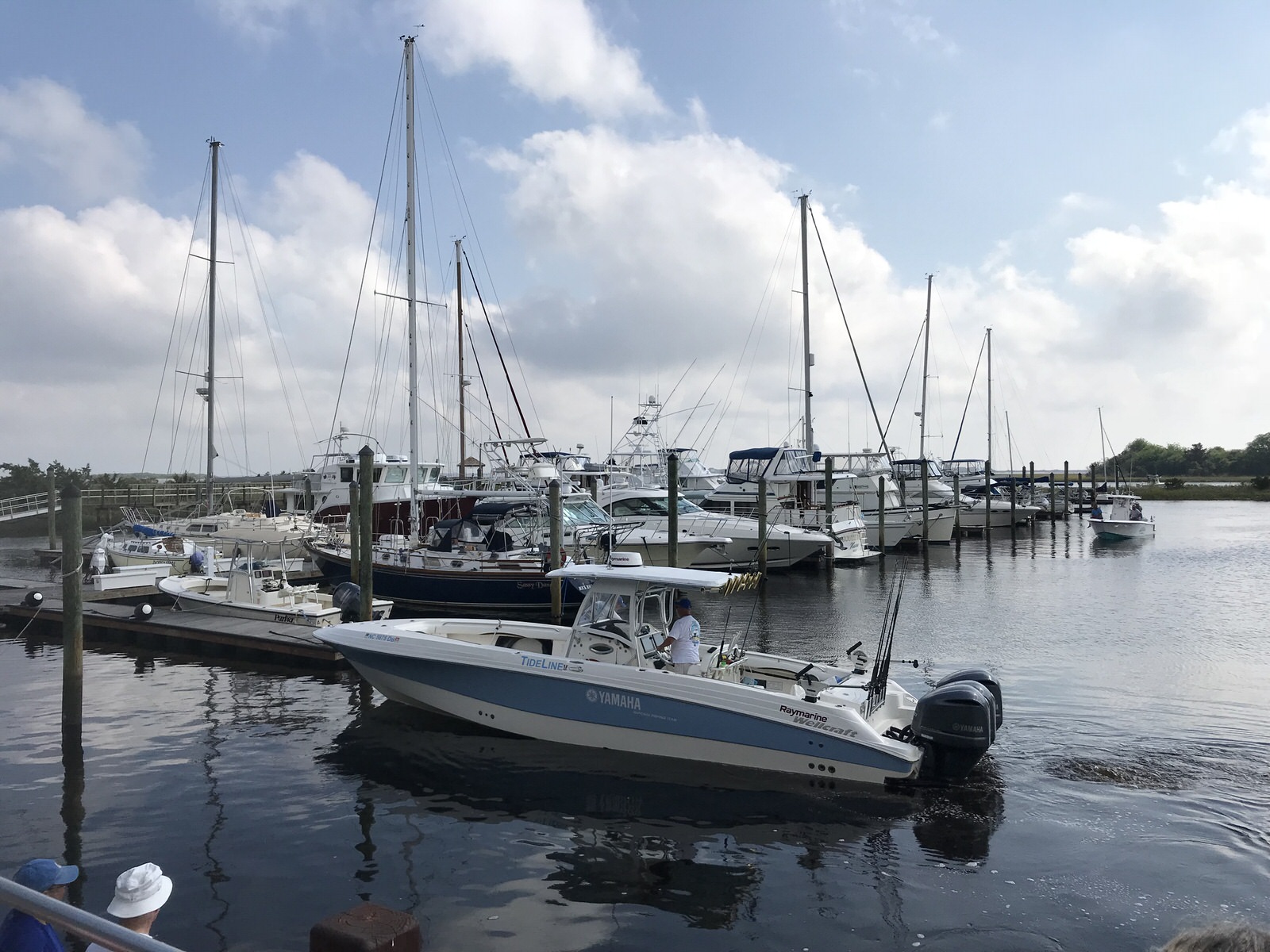 “Saturday morning we had our first king on in less than 5 minutes,” Cardwell said.  “It wasn’t a big king, but we took it as a good sign.  An hour or so later we got our second strike and this fish was larger than either from Friday or our earlier fish.  This created a little excitement and got us jacked up a bit thinking the bite was going to fire off.

“The bite didn’t fire off, but the water was the cleanest we had seen and there was bait, so we kept circling the bait pods and hoping.  Our third strike came at about 11:30 and it was immediately obvious from the whine of the reel it was a larger fish.  Mike grabbed the rod and the deal was on.”

“When the big fish hit, it burned the reel down for a while and took half the spool or more,” said Mike Lundy.  “It was that typical mid 30s fish that is wild and full of piss and vinegar.  We were fishing pretty close to the beach and shallow, like maybe 15 feet deep, so it had to run out instead of down. It tangled in one of our short lines and gave us a scare for a couple of minutes, but we got it free.

“Those wild running fish often make a pass back close to the boat and this one did it too,” Lundy said.  “That was a mistake.  Kevin is a excellent gaff man and when it ducked under one side of the bow, he was waiting for it when it came out the other.  With a quick swing of the gaff, he stuck it and dropped it on the deck before it realized what was happening.  The fish got real crazy after that, but it was in the boat and we let it calm down before trying to remove the rig and put it in the fish bag.”

“Alex and his dad got real wide eyed when the big fish hit the deck,” Lundy said.  “It was the biggest king they had ever seen.  It and the second king were large enough for Alex to win the Junior Angler Aggregate prize for Saturday too.

Lundy said he and Cardwell have fished the US Open together for more than 30 years and Alley joined them about 20 years ago. None of them thought this king was big enough to win so they kept fishing.  They guesstimated it at 38 pounds and were hoping it would make second or third place and win some TWT money in addition to the regular tournament prize.

They fished several more hours trying to find a larger king, but it didn’t happen.  Around two o’clock they decided to head back and see where it would place. 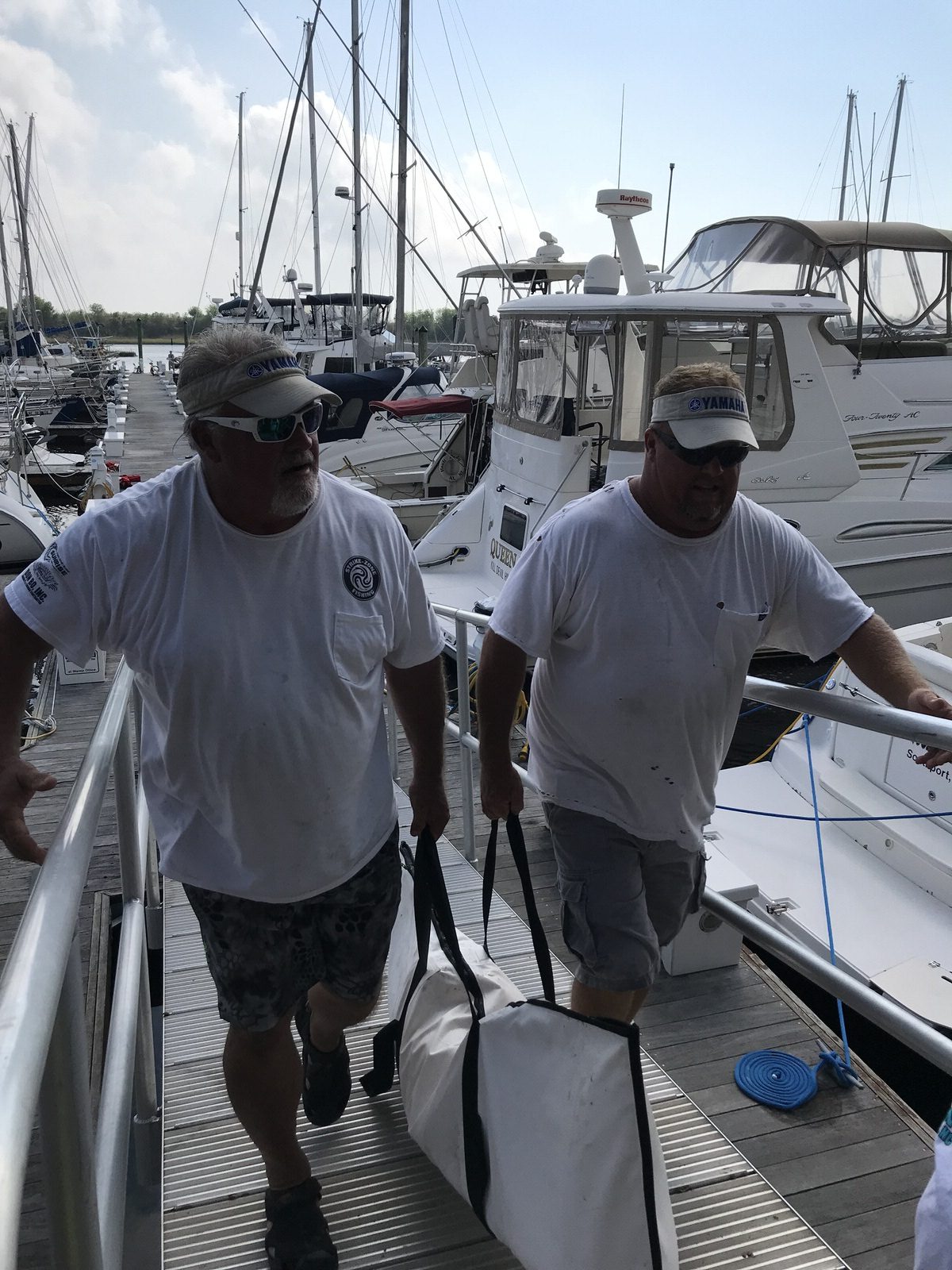 “We didn’t know what say or how to react when a tournament official told us we were the new leader,” Cardwell said and Lundy and Alley echoed.  “We weighed just before three, so there was still an hour to go.  Needless to say, we were on pins and needles until they announced the last fish had been weighed and the scales were closed.  We got a pretty good scare about 20 minutes after we weighed when the Beeracuda put a big fish on the scales.  It was slightly longer than ours, but not as big around and only weighed 36 pounds.”

Folks could hear that sigh of relief for a long ways.

Lundy said the fish were hitting double pogy rigs close to the motors.  He said they didn’t have a strike on a longer line or single bait either day.  He guessed in the dirty water the extra flash of two baits tethered together helped the fish see them.  He also questioned if the fish were curious and checking out the noise from the motor, which got them close enough to see the baits. Whatever the reason, he was really happy the big fish had swam close to the Tide Line’s three Yamaha outboards and decided to eat one of their baits.

Team Tide Line’s Junior Angler, Alex Ferm, is a young man they met in 2017 when Alex and his dad, Ole, were assigned to the Tide Line for a day of fishing in the United Special Sportsmen Alliance Childswish Fishing Day held each August in Southport.  The team enjoyed the young fellow and fishing was slow that day, so they invited he and his dad to join them for the 2017 US Open.  Fishing was also slow then, so they invited them for this year’s US Open.  Lundy said Alex’s smile never stopped and his enthusiasm never waned and he feels the young man is now hooked on fishing for life.  Cardwell agreed and added that his invitation to fish the US Open now extends as long as Alex wants.

Young Alex Ferm won $1,000 for his Junior Angler Aggregate prizes and said he would be buying a new fishing rod and reel, then putting the rest in his college fund.  This young man seems to have his priorities straight.

A quick check shows the $112,000 total prize won by Team Tide Line is the largest cash prize ever awarded in a king mackerel tournament.  Their tournament check was for $108,717 (Tournament, Standard TWT, High Roller TWT and Super High Roller TWT), which would set the top prize record by itself. Then, there was an additional $2,300 from the SKA and Young Alex Ferm won the Junior Angler Aggregate prize both days for $1,000.

Cardwell, Lundy and Alley are previous US Open winners from 2000.  Fishing was also a bit slow during the 2000 tournament and they pulled in the winning fish of 39.85 pounds.  Their 2000 winning king was caught between the Cape Fear Sea Buoy and Lighthouse Rock, but this year they made a 70 mile run south to find the winning fish.

As previously noted, fishing action was slow on Friday and not many large fish were caught.  Reel Attitude, with Capt. Allen Wells and crew, led the tournament at the end of day 1 with a 33.30 pound king.  There were a couple more 30 pounders, but fishing was slow.  The bite fired up a bit more on Saturday.  The action wasn’t as wide open as it sometimes gets, but it was a definite improvement.

As larger fish were brought to the scales on Saturday, Reel Attitude slipped to sixth place.  The US Open has a reputation for big fish and lots of fish and when the bite started on Saturday, everyone was waiting for a 40 pounder to come in.  It never did, but there were more than 15 kings in the 30s weighed on Saturday.

Tim Gray and the Beeracuda thought they had a shot at the lead when they weighed about 20 minutes after the Tide Line.  Their king was longer but lighter and they had to settle for second place with a 36.05 pound king.  Patrick Overstreet and the Service Call crew were the leaders for a short time Saturday afternoon, but it didn’t last.  They weighed a 35.45 pound king about 20 minutes before the Tide Line and 40 minutes before the Beeracuda.  Service Call finished in third place.

Click here to listen to our LIVE podcast from the US Open with Captain Jerry, SiriusXM Marine and the Southern Kingfish Association.

Full tournament results are below.