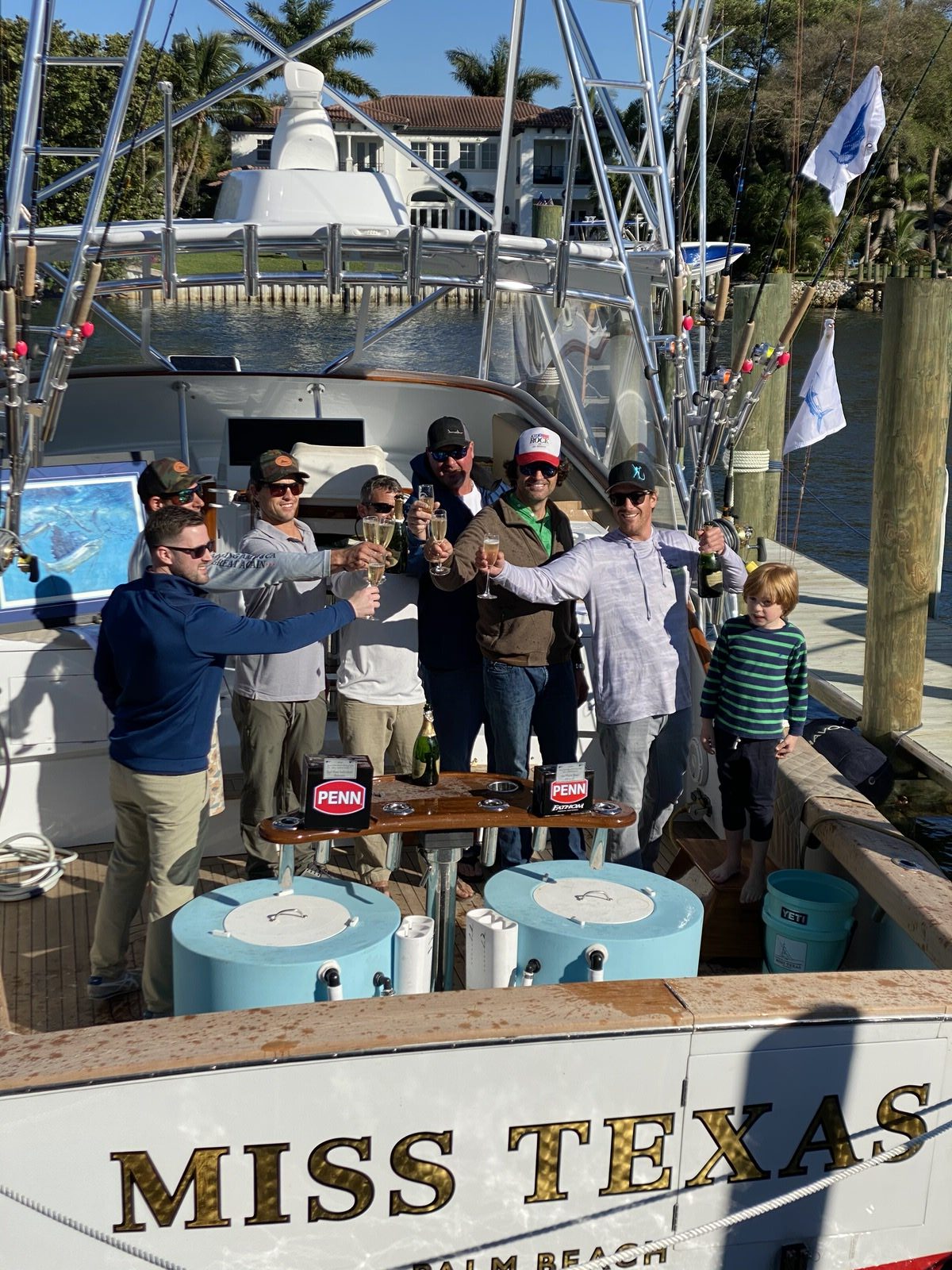 Fishing the Silver Sailfish Derby is more than presenting lively baits in the sailfish sector of the Gulfstream; it’s carrying on a tradition that many anglers have cherished for decades. There’s a nostalgic excitement in the air that’s unique to the Derby. As the throttle comes down to punch out Palm Beach Inlet and spend a day offshore, participants know there’s much more on the line than just wintertime sails. Some of the finest captains, anglers and crews took to the water in early January to fish the 84th running of the World’s Oldest Sailfish Tournament.

Crisp weather and calm seas greeted the 47 boat fleet Day 1. The first fish released in the West Palm Beach Fishing Club’s (WPBFC) 2021 Silver Sailfish Derby came 14 minutes into the four-line event, after the 8am “lines-in” sounded over the VHF radio. Ian Goldstein on the ShellYeah, a 37’ SeaVee, was on the rod for that first sailfish release. A total of 196 Atlantic sailfish were released over the duration of the two-day tournament and 25 sails were tagged.

Capt. Ryan McBride and the Gator One team released 8 sails to take Top Boat honors Day 1. Capt. Mark Lamb and the 39’ Contender, Doing It Alll/Hardway, posted 7 releases to fill in 2nd place daily with 4 of those coming from the Top Daily Angler, Daryl Deka of Wellington, FL. Capt. Andrew Dotterweich and the Fish On took 3rd place on the day also with 7 releases on the 48’ Viking, beat out only on time of release. The south wind was almost nonexistent that morning but gusted around 10 knots in the afternoon before lines out at 4pm.

The 2nd and final day of the Derby would produce 32 less fish than the previous day, as the fleet recorded 82 sails. A howling west wind switched things up, and the top crews from Day 1 didn’t exactly find the same bite on yesterday’s numbers. The Doing It All/Hardway crew started the final day with high hopes and even higher expectations, successfully hooking and releasing a double. But their lead was short lived, as they wouldn’t catch another sail after that, and finished 3rd Overall with 9 releases. Team Gator One would suffer a similar fate and release just one sailfish on Day 2. As the old saying goes, “You don’t leave fish to find fish.” Returning to the scene where Day 1’s hot bite occurred resulted in a 4th Place Overall finish for Gator One with 9 total releases aboard their 39’ Yellowfin.

What makes the captain decide to fish north or south? Pre-fishing and communicating with other boats helps gather intel on where the bite may be Day 1, but when the seas change and the wind switches around after the first day of fishing, perhaps just the flip of coin could decide if they make a right or left turn headed offshore. Some things are better left up to chance.

On Day 2, Capt. Matt Bierley and the Miss Texas, a 40’ Gamefisherman, bested the fleet with 8 releases to claim Top Daily Boat; the crew’s tournament accolades would not stop there. They continuously picked away at a pod of sails while kite fishing south out of Palm Beach Inlet. The commotion of each leader grab was followed by a vigorous applause as the crew would commend each other for the successful release. There were times when they’d hook a fish right alongside another boat who was also soaking baits to the best of their ability. It must have just been the Miss Texas’ day as one fish led to another, and the crew (Capt. Matt Bierley, Gregg Hemingway, York Pottratz, Chris Hodge, Paul Murray, Chris Gilbane, Freddy David, Joey Salvo and Tom Land) claimed their spot in the sailfishing history books as the winners of the 84th annual Silver Sailfish Derby. Adding to their 4 releases from Day 1, the Miss Texas totaled 12 releases atop their competitive colleagues.

One aspect of tournament fishing is confirming releases via video. This entails clearly identifying that it’s a sailfish on camera and showing a successful release by touching the leader. When the bite is on and crews are scrambling in the cockpit to make it all come together, sometimes essential elements of capturing the release on video are missed. This is an unfortunate byproduct of modern-day tournament sailfishing.  This year the Derby Committee had to disqualify a fish that was a make or break. The Priceless, a 48’ Viking, was tied with Miss Texas at the end of the tournament but had the edge with an earlier time of release for their final sail. The committee had to DQ one release from the Priceless on a fish that was never seen on video and couldn’t be identified as a sailfish. This resulted in a Miss Texas win. The integrity of the Derby comes down to upholding rules as they’re stated to ensure all crews are complying to the same criteria.  Video review is intended to confirm fish, not disqualify them. It can all happen so fast when releasing this exciting pelagic species and the WPBFC appreciates crews taking the necessary preparations to participate in this aspect of the tournament. Jorge Sanchez, Capt. Nick Carullo and the Priceless had an impressive Day 2 and were outside the top 3 headed into the final hour of fishing. They would make a clutch push and finish 2nd overall with 11 releases. Hats off to the crew for taking the ruling in stride, in an act of sportsmanship to fellow participants.

Capt. Dave McGaha and the KiteKeeper would earn several titles in the historic Derby. They enjoyed calm seas Day 1 and sported the snotty Day 2 conditions in a 35’ Strike center console to become the Top Small Boat, finishing with 9 releases to a 5th place finish overall. The KiteKeeper managed to tag all 9 of their fish to claim Top Tag Team honors as well. The Derby’s hallmark is its great ties to early billfish conservation and crews continue to support this strong conservation ethic to ensure their fishery stays healthy for many years to come. Lastly, and perhaps most notable, angler Mike Simko of North Palm Beach would be deemed the Top Angler Overall as he turned the handle on all 9 of the KiteKeeper’s fish.  This individual honor is awarded with the Mrs. Henry R. Rea trophy, a magnificent silver sailfish sculpture that dates back to the event’s origin in 1935 and is sponsored by Elizabeth Richebourg Rea of Connecticut. The Rea Trophy remains one of the crown jewels in all of angling.

The Top Lady Angler trophy is sponsored by the Hampp Family of New Jersey in memory of Rose Hampp, who won the honor in the 1957 Derby along with many other awards throughout her accomplished angling career. Carly Desmond was awarded the trophy releasing 5 sailfish aboard the 48’ Viking berthed at Sailfish Marina, Day Sea. This award is always highly coveted. Many of these lady anglers have proven they’re just as skilled tangling with sailfish on 20 pound test line as any other crew member who might grab the rod.

The Silver Sailfish Derby, is produced by the West Palm Beach Fishing Club and continues to be the organization’s marquee event. While the Derby looked a little different this year, the sport fishing tradition continued. The WPBFC is proud to host this tournament that represents an important part of its region’s unique identity.