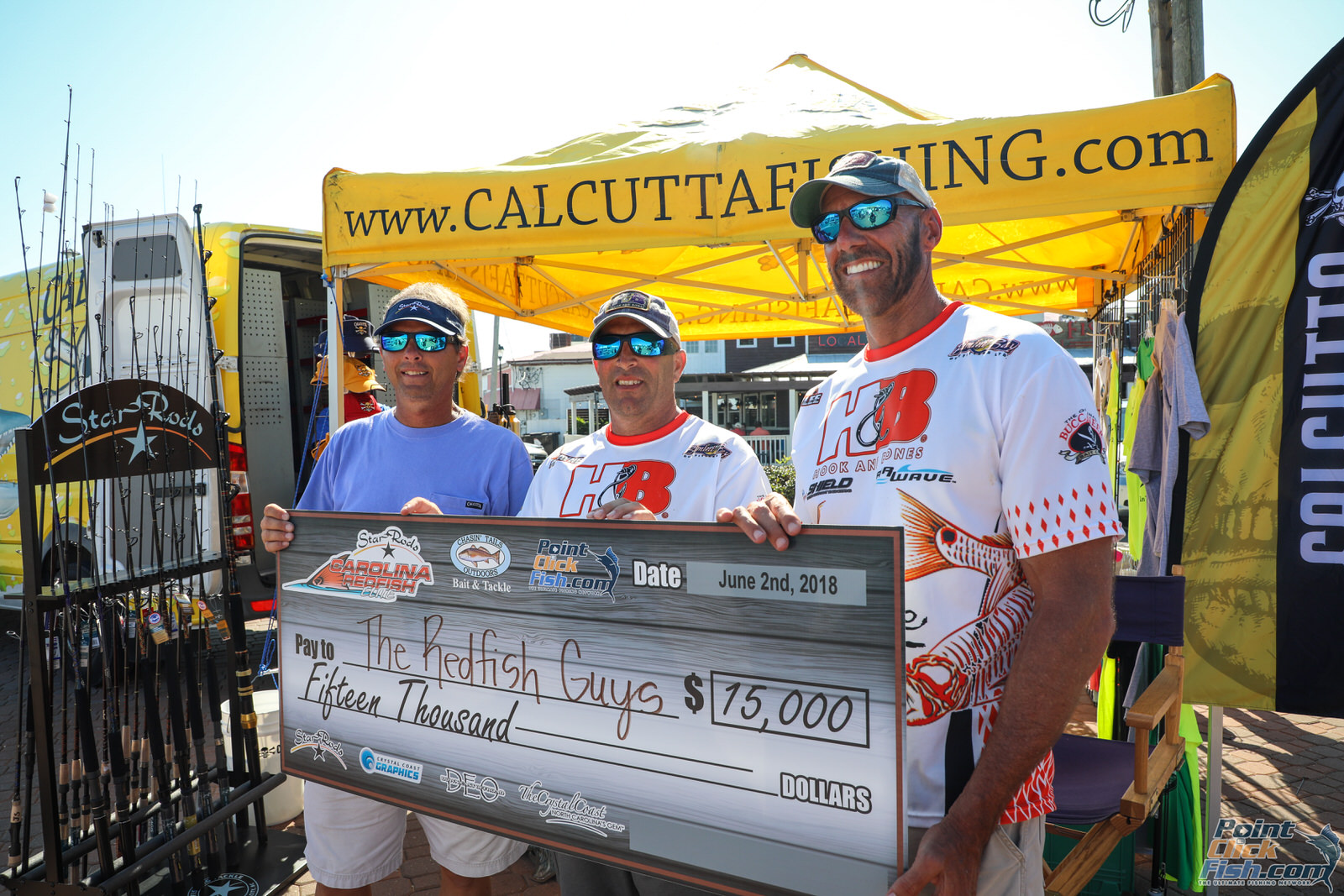 The best catches were weighed on the first day of the Star Rods Carolina Redfish Elite tournament and at the end of the day, Team Hook and Bones/The Redfish Guys of Dwayne Smith and Lee Padrick found themselves a few ounces from the lead in second place.  This just stiffened their resolve to win the tournament and they knew the best way to be sure to do that was to weigh the heaviest bag of the second day.  When the scales finally closed on day two and the daily weights were combined, they had claimed the win by more than a pound and the celebration began.

Smith and Padrick had a game plan that worked to perfection – Friday.  Unfortunately, just about everything went wrong Saturday until about 1:00. However, after working through some history and doubling back, things began coming back together and they got on a good bite for the last hour or so and pulled it out.  When they headed for the scales Saturday afternoon, they were wondering if they might have enough to win, but were confident of being competitive.

“On Friday we wanted to weigh at least 13 to 13.5 pounds,” Dwayne Smith said.  “We felt that was what it would take to be in a position to have a good day Saturday and win.  We were looking at 14 pounds or so early in the afternoon and sat on a school of fish, not casting, but managing them for the second day.  That was really hard to do.”

“If it had been a one day tournament, we would have continued casting and kept trying to upgrade,” Smith continued.  “Knowing we would need good fish again on Saturday, we watched nice fish swim around the boat for more than 2 hours and didn’t cast. Our only issue on Friday was blowing a fuse on our Power-Poles and not having a spare.”

“Saturday began different,” Smith said. “The wind was blowing 15-20, the tide would be a hour later, and weigh-in would be an hour earlier.  We had saved a spot to fish early Saturday and nothing was biting there.  We moved to another spot nearby and again nothing was biting.  At the third spot I caught one nice fish right off and we added a small one.  We were beginning to feel bad at about 1:30 when all we had was about 10 pounds.

“We made the decision to check where we had been the day before and this time the tide was high enough,” Lee Padrick said. “Dwayne made a cast and immediately hooked up with a smaller fish.  We didn’t have a lot of time to make the weigh in at 3:00, but we began to slowly upgrade our fish.  Our weight crept up a few ounces at a time until we thought we were at about 13 pounds. Most two day tournaments have slower second days, so we were hopeful, but not optimistic, about scoring the win. There were a lot of other good fishermen competing and we thought someone had probably found big fish.”

Smith and Padrick were elated when the last fish were weighed and the scales closed.  Their 13.93 pound bag was the heaviest of the second day.  Smith said this was the best plan they had ever had and it worked.  It took a while to come together, but it finally did.  They said they caught all their fish on Tsunami Spoons, Johnson Silver Minnow Spoons and Gulp Baits on Carolina rigs.

The second place finishers were Cory Durako and Richard Gilligan of Team Chasin’ Gingers.  They spent Friday night in third place with 14.14 pounds and added 13.31 pounds on Saturday to total 27.45 pounds.  Dexter Smith and Milton Miller of Team Duplin County Mafia made the largest gain on Saturday, but it wasn’t quite enough to get the win.  Still, their climb from 12th on Friday to third overall was impressive.  While most teams weighed lighter bags on Saturday, Smith and Miller found some larger fish and weighed more than a pound heavier on Saturday.  Their combination of 12.27 pounds on Friday and 13.64 pounds on Saturday gave them 25.91 pounds total and allowed them to bound past a double handful of teams.

Fishing conditions were better Friday, plus weekend fishermen weren’t on the water.  The wind came up Saturday and made some runs difficult and pushed water into and out of places that had been productive on Friday.  The wind also made sight fishing and finesse casting difficult.

Still the largest fish of the tournament was caught on Saturday.  Team Flatsmaster, with Jacob Gainey and Jerry Burns found a perfect 26 7/8 inch tournament red that was a pig with a full belly.  The fat redfish weighed a whopping 8.86 pounds.  It was more than a pound heavier than the 7.83 pounder Team Smokin’ Reels, with Jamie Player and Brent Hart caught to earn the large fish prize on Friday.

Typically no one brags about catching the smallest fish of the tournament, but the Star Rods Carolina Redfish Elite offered $1,000 prizes for this dubious honor each day.  Friday’s smallest fish was a 3.26 pounder weighed by Team Gotta Kill It To Grill It, with Rob Koraly and Jake Kight.  Team No Idea, with Wyatt Clark and Luke Tippet and Team Riley Rods, The Day 1 leader, with Mike Pederson and Gage Henley, tied for the smallest fish on Saturday with 3.27 pounds.

The Star Rods Carolina Redfish Elite Tournament is the premiere redfish tournament in N.C.  Higher entry fees translate to higher payouts with a smaller field and the Star Rods Carolina Redfish Elite guaranteed $15,000 to the winning team. This gets fishermen’s attention and the higher payouts to a quarter of the field  attract the premiere redfish angers from across the southeast.  They can make the trip and cover their expenses as long as they place.  The excellent prize package begins by guaranteeing $15,000 for winning and holds to $1,100 for 10th place, with special $1,000 daily prizes for the largest and smallest redfish of the day.

The tournament had its pageantry too.  Early risers could view the participants in their boats as they assembled and idled by the checkout officials at Big Rock Landing each morning.  These were some of the most highly specialized redfish boats and many of the top anglers on the East Coast.  Boat wraps, redfish towers and team jerseys were a eyeful and worth getting up to see.

Festivities at Big Rock Landing began at 10:00 A.M. each day with sponsor booths, vendors, games, music and fun.  Music was streaming from the Point, Click, Fish Tournament Trailer and several video screens continually flashed pictures from the 2017 tournament.  These screens would become the leaderboard once the scales opened at 3:00.

Friday afternoon there were already fishermen waiting when the scales opened.  The suspense was thick with fellow competitors and spectators voicing their approval for all large fish.  When the scales closed, Riley Rods, with Mike Pederson and Gage Henly were atop the leader board with a pair of fat redfish that weighed 14.95 pounds.  The Redfish Guys, Smith and Padrick, were less than a quarter pound behind at 14.73pounds and Chasin’ Gingers, Durako and Gilligan, were also on the plus side of 14 pounds at 14.14.  These teams took the early lead and established themselves as the teams to beat.

When weigh-in was completed, there was a dinner for the tournament fishermen and a bunch of lucky youngsters that had registered for the fishing seminar presented by tournament beneficiary,  Cross Trail Outfitters.  Cross Trail Outfitters is a 501C3 charity that provides youths age 7 to 17 with opportunities to enjoy the outdoors by hunting and fishing and is the primary beneficiary of Star Rods Carolina Redfish Elite Tournament proceeds. 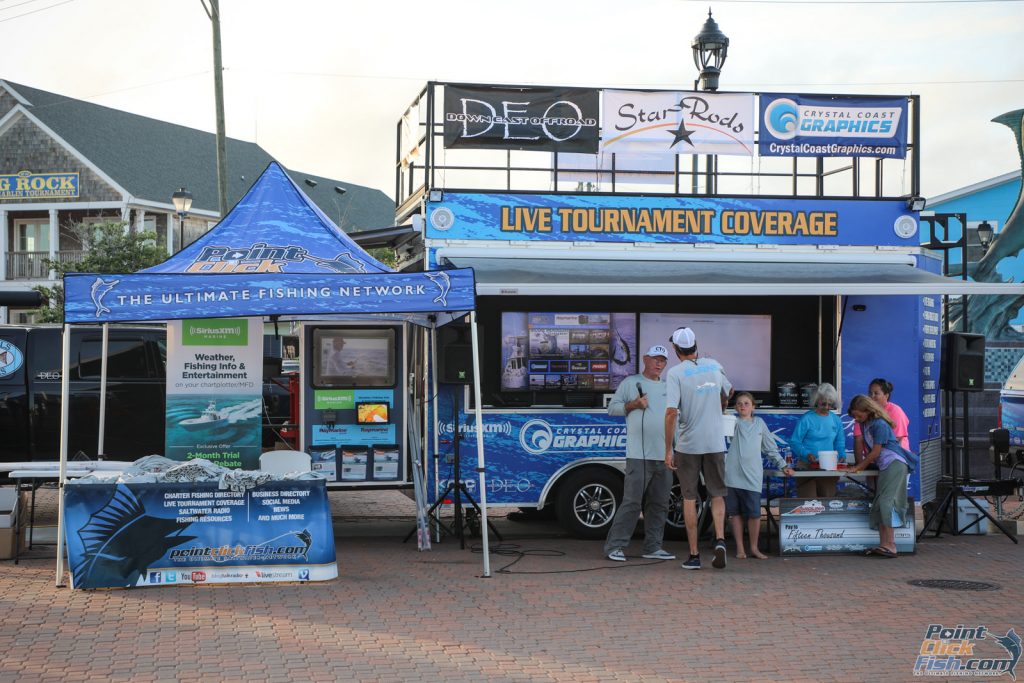 Shortly after the boat parade at checkout Saturday morning, Cross Trails Outfitters begin a Kids Fishing Challenge.  The youngsters could fish until noon and their fish were weighed in at Big Rock Landing just before the scales opened for the redfish competitors. Fishing was a hour shorter on Saturday, with the Star Rods Carolina Redfish Elite scales opening at 2:00 and all fishermen needing to be by the checkpoint by 3:00.  The awards ceremony and presentation of the $15,000 winner’s check followed the close of the scales.

Carolina Redfish Elite Tournament Co-Director Jay Feimster said, “This has been just what Matt (Chasin Tails Outdoors) and I hoped for.  We have been working hard to make this event bigger and better each year and involve more of the local community.  Our goal has always been to build a format that involves fishing, charity, youth, and the community and I think we’ve done it.

“The fishermen did their part and caught big fish that were fun to watch weigh in,” Feimster continued. “Early risers also appreciated the parade of boats down the Morehead city Waterfront just after daylight each morning.  Then Cross Trails Outfitters showed why we support them by teaching the youngsters about fishing Friday evening and following that up Saturday morning with a tournament where they could demonstrate what they learned.  It was a great place for the entire family to come out and take part and watch some of the best Elite Redfish Anglers in the Carolinas.”

Feimster said anyone who missed part of the festivities or those who wanted to see it again would have the chance when it airs on Chasin’ Creation TV on the Hunt Channel later this summer.  The show will also steam on Carbon TV, The Hunt Channel, and Generation 7 Channel.  For more information on Chasin’ Creation TV and when the Star Rods Carolina Redfish Elite Tournament will air, visit https://chasincreation.com.