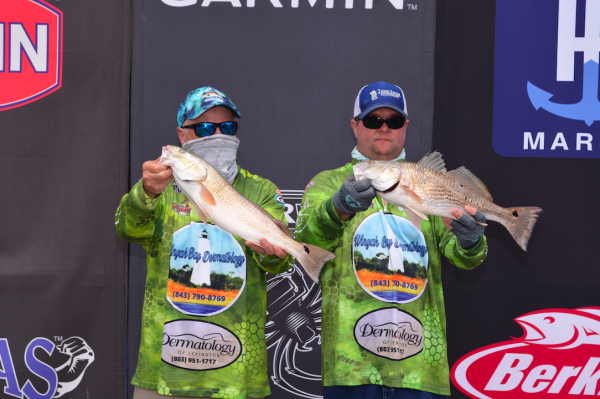 The team made the most out of the good weather with tons of casts in the local Georgetown waters. The team exclusively fished Berkley Gulp! baits and attributed their success to the venerable inshore baits along with a bit of luck.

“Today, the stars were aligned,” said Smith. “Everything went perfect. We caught fish from start to finish.”

Along with the Ranger RB190 and Mercury outboard, the anglers took home an additional $2,100 in Anglers Advantage cash.

Second-place finishers Hank Edwards, of Darlington, South Carolina, and Ian Mathews, of Effingham, South Carolina, brought 8.51 pounds to the scales to take home $3,260 in winnings. They also opted to stay close to the take off and fished the local waters with Berkley Gulp! and spinner baits.

Third-place finishers Ryan Bell ad John Koonce, both of Charleston, South Carolina, made the long run from Georgetown to fish their home waters. They threw white Berkley Gulp! baits with a slow retrieve to catch their limit.

“It was windy with dirty water, but we still managed to catch 30 reds,” Bell said.

Chris Edmonds and Carl Meyer placed fifth and took home the $500 Berkley Gulp! Big Redfish award, along with $250 credit to the Berkley website, for their 5.39-pound kicker caught on Berkley Gulp!.

The next stop for the IFA Redfish Tour is set for Lafitte, Louisiana, on June 13. Teams that compete in at least two regular-season events will be qualified for the 2020 IFA Redfish Tour Championship.